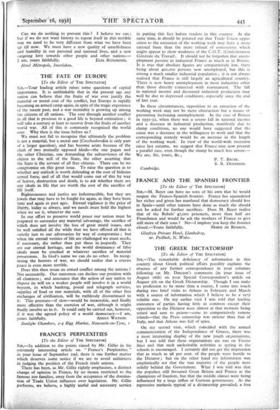 • THE FATE OF EUROPE

[To the Editor of THE SPECTATOR] SIR,—Your leading article raises some questions of capital importance. It is unthinkable that in the present age an nation can believe that the fruits of war ever justify the material or moral cost of the conflict, but Europe is rapidly becoming an armed camp again, in spite of the tragic experience of the recent past, and a war mentality is growing up among the citizens of all nations. The cost through another conflict in all that is precious to a good life is beyond- estimation ; it will take .a century at least to recover from the fruits of another world war. All of this is commonly recognised the world over. Why then is the issue before us?

We must not fail to recognise that ultimately the problem is not a material, but a moral one (Czechoslovakia is only part of a larger question), and has become acute because of the clash of two mutually opposed ideals—the one pagan and the tither Christian, one demanding the subservience of the citizen m the will of the State, the other asserting that the: State is the servant of all free citizens. There can be no compromise on this great issue. To raise the question as to whetliet any outlook is worth defending at the cost of hideous armed force, and of all that would-come out of this by way of honor, destruction and death, is to ask whether there are any ideals in life that are Worth the cost of the sacrifice of life itself.

Righteousness and justice are indestructible, but they are jewels that may have to be fought for again, as they have been tithe and again in past ages. Eternal vigilance is the price of liberty, "tOday 'as always; and we nee& must hold' the highest when we see it, whatever the cost.

In our effort to preserve world peace our nation must be prepared to surrender any material advantage, the sacrifice of wilieh does not involve the loss of great moral issues, and be well satisfied all the while that we have offered all that is strictly just to our adversaries by way of compromise; but when the eternal verities of life are challenged we must needs, if necessary, die rather than put these in jeopardy. They are our eternal heritage, and the world dominance of false ideals must be crushed at whatever sacrifice of material possessions. In God's name we can do no other. In recog- nising the horrors of war, we should realise that a craven peace is even more terrible.

• Does this then mean an armed conflict among the nations ? Not necessarily. Our statesmen can declare our position with all clearness ; and announce that the action of any nation to itapose its will on a weaker people will involve it in a world boyeott, in which banking, postal' and telegraph services, supplies of food or raw materials, with all of the other free exchanges of civilisation, will be ruthlessly discontinued to it. 'This pressure—if slow—would be inexorable, and finally more effective than the coercion of war, although it might finally involve us in it It could only be carried out, however, if it was the agreed policy of a world democracy.—I am,