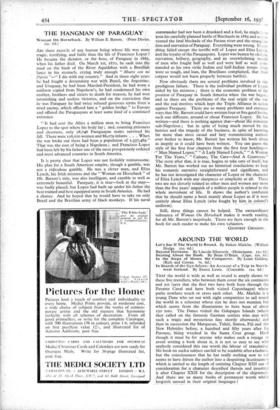 THE HANGMAN OF PARAGUAY

— • ; - ARE there records of any human being whose life was more tragic, terrifying, and futile than the life of Francisco Lopez'? He became the dictator, or the boss, of Paraguay in 1862, when his father died. On March 1st, 1870, he sank into the mud on the bank of the River Aquiciaban with a Brazilian lance in his stomach, crying truly enough " Miter° con mi Patria "—" I die with my country." And in those eight years he had fought a devastating war with Brazil, the Argentine, and Uruguay, he had been Marshal-President, he had worn a uniform copied from Napoleon's, he had condemned his ciivn mother, brothers and sisters to death for treason, he had won astonishing and useless victories, and on the conviction that he was Paraguay he had twice refused generous terms from 'a tired enemy, which offered him a "golden bridge" to Europe and offered the Paraguayans at least some kind of a continued existence.

"It had cost the Allies a million men, to bring Franisco Lopez to the spot where his body lay ; and, counting prisoners and deserters, only 28,746 Paraguayan males survived his fall. There were 106,000 women and 86,079 infants . . When the war broke out there hid been a population of 1,337,489." That was the cost of being-a Napoleon ; and Francisco Lopez had been left by his father one of the most prosperously ordered and most advanced countries in South America.

It is pretty clear that Lopez was not foolishly venturesome. His plan for a South American empire, though a gamble, was not a ridiculous gamble. He was -a clever man, and Eliza Lynch, his Irish mistress and the "Woman on Horseback" Of Mr. Barrett's title, was also intelligent, and capable as well as extremely beautiful. Paraguay, it is true—look at the map— was badly placed, but Lopez had built up under his father the best trained and best equipped army in South America. He had A chance. And he hoped that he would have to take on only Brazil and the Brazilian army of black monkeys. If his naval commander had not been a 'drunkard and a foot, he might 1 e Von his carefully Planned battle of Riachuelo in 1865 and so 1- ....

vented the fatal blockade of the Parana river and the strangt..a- ; lion and starvation of Paraguay. Everything went wrong. Every- thing failed'except the terrific will of Lopez and Eliza Lynch, and the loyalty of the Paraguayans. Lopez was beaten by chol,:ra, starvation, bribery, geography, and an overwhelming weight of men who fought half as well and were half as well com- manded as hjs own virile Indian and half-Tndicui troops (they Were so tough, and lean, the Brazilians complained, that their corpses would not burn properly between battles).

Now obviously there are several problems involved in this prodigious failure. There is the individual problem of Lopez aided by his mistress ; there is the economic problem of the position of Paraguay in South America when the war began ; and so there are the problems of the real origin of the war and the real motives which kept the Triple Alliance. in action against Paraguay. There are so many problems and entrance ways that Mr. Barrett could have written four or fivegood books, each one different, around or about Francisco Lopez. He has written—and there is nothing against thataticinf–the Minantic sub-Napoleon ; but in spite of being much moved by the -heroics and -the tragedy of the business, in spite of;-knowing far more than most casual and lazy romanticising authors ever bother to know, Mr. Barrett has written his book about as ineptly as it could have been written. You can guess the style of the first four chapters from the first four headings- ." Men Named Lopez," "A LadiNamed Lynch," .""A Woman For The- Years," "Culture, The. Cats—And A Courtesan." The story after that, it is true, begins to take care of itself, but Mr. Barrett has worked out no historical 'Conclusions to keep his romantic narrative straightforward and significant, and he has not investigated the character of Lopez or the character of Eliza Lynch with any sharpness or simplicity at all. These :two are not cleverly related to other men and women any more than the five years' anguish of a million People is related to the whole movement of life. It shows the author's confusion that he should name a book mainly about Lopez as 'if it were

entirely about Eliza Lynch (who fought by him in colonel's - .„ _ Uniform).

Still, these things cannot be helped. The extraordinary -substance of Woman On Horseback makes it worth reading, for all Mr. Barretes ineptitude. There are facts enough in the book for each reader to make his Own, valuation.