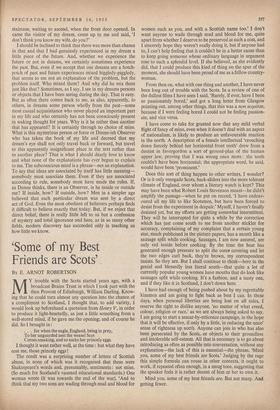 `Some of my Best Friends are Scots'

BY E. ARNOT ROBERTSON MY trouble with the Scots started years ago, with a broadcast Brains Trust in which I took part with the then Provost of Edinburgh, William Darling. Know- ing that he could turn almost any question into the chance of a compliment to Scotland, I thought that, to add variety, I would look up beforehand a quotation from Henry V, in order to produce it light-heartedly, as just a little something from a well-stored mind, if he gave me the opening; and of course he did. So I brought in : . . . for when the eagle, England, being in prey,

To her unguarded nest the weasel Scot Comes sneaking, and so sucks her princely eggs.

I thought it went rather well, at the time : but what they have cost me, those princely eggs !

The result was a surprising number of letters of Scottish abuse, in none of which was it recognised that these were Shakespeare's words and, presumably, sentiments : not mine. (So much for Scotland's vaunted educational standards.) One woman wrote (it was towards the end of the war), 'And to think that my two sons are wading through mud and blood for women such as you, and with a Scottish name too.' I don't want anyone to wade through mud and blood for me, quite apart from whether I deserve to be preserved at such a cost, and I sincerely hope they weren't really doing it, but if anyone had to, I can't help feeling that it couldn't be in a better cause than to keep going someone whose ordinary language in argument rose to such a splendid level. If she believed, as she evidently did, that I could produce this kind of thing on the spur of the moment, she should have been proud of me as a fellow country- woman.

From then on, what with one thing and another, I have never been long out of trouble with the Scots. In a review of one of the dullest films I have seen I said, 'Rarely, if ever, have I been so passionately bored,' and got a long letter from Glasgow pointing out, among other things, that this was a non sequitur, because if I were feeling bored I could not be feeling passion- ate, and vice versa.

I have come to take for granted now that any mild verbal flight of fancy of mine, even when it doesn't deal with an aspect of nationalism, is likely to produce an unfavourable reaction in the north. A description of a female intellectual 'crouching down fiercely behind her horizontal front teeth' drew from a dentist in Invergordon a sort of ground-plan of the human upper jaw, proving that I was wrong once more : the teeth couldn't have been horizontal; the appropriate word, he said, would have been 'prominent.'

Does this sort of thing happen to other writers, I wonder? Or is it only renegade Scots, back-sliders into the more tolerant climate of England, over whom a literary watch is kept? This may have been what Robert Louis Stevenson meant—he didn't amplify the passage—when he put on record, 'I have endeav- oured all my life to like Scotsmen, but have been forced to desist from the experiment in despair.' Myself, I haven't finally desisted yet, but my efforts are getting somewhat intermittent. They will be interrupted for quite a while by the correction which has just come south to me from another stickler for accuracy, complaining of my complaint that a certain young star, much publicised in the picture papers, has a mouth like a sausage split while cooking. Sausages, I am now assured, are only red inside before cooking. By the time the heat has generated enough pressure to split the outer covering and let the two edges curl back, they're brown, my correspondent insists. So they are. But I shall continue to think—here in the genial and blessedly less literal south—that quite a lot of currently popular young women have mouths that do look like sausages split while cooking. It's a fashion, and a nasty one, and if they like it in Scotland, I don't down here.

I have had enough of being pushed about by my regrettable kinsmen and am going to fight back as best I can. In these days, when personal liberties are being lost on all sides, I reserve the right to dislike anyone, 'no matter of what creed, colour, religion or race,' as we are always being asked to say. 1 am going to start a smear-by-reticence campaign, in the hope that it will be effective, if only by a little, in reducing the unco' sense of rightness up north. Anyone can join in who has also been persecuted by the Scots, or objects to their groundless and intolerable self-esteem. All that is necessary is to go about introducing as often as possible into conversation, without any explanation—the lack of this is essential—the phrase, 'Mind you, some of my best friends are Scots.' Judging by the rage this simple formula can rouse in other contexts, it ought to work, if repeated often enough, in a smug tone, suggesting that the speaker feels it is rather decent of him or her to own it.

Mind you, some of my best friends are. But not many. And getting fewer.