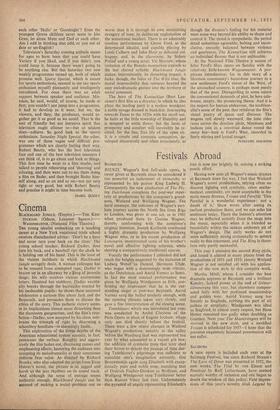 BLACKBOARD JUNGLE. (Empire.)--THE. KEN- TUCKIAN. (Odeon, Leicester Square.)— WAGONMASTER. (National Film Theatre.) THE young idealist embarking on a teaching career at a New York vocational trade school receives disenchanted advice: 'Don't be a hero and never turn your back on the class.' The young school teacher, Richard Dadier, does turn his back, and a baseball rips the chalk he is holding out of his hand. This is the least of the violent incidents in which Blackboard Jungle savagely deals. A woman colleague has to be rescued from attempted rape; Dadier is beaten up in an alleyway by a 'gang of juvenile thugs; his wife receives vicious anonymous letters. Daunted but stubborn, Dadier eventu- ally breaks through the barricades erected by his ineducable pupils: he shows these untamed adolescents a cartoon film about Jack and the Beanstalk, and persuades them to discuss the ethics of the story. This pathetic victory seems in its implications almost more disturbing than the classroom gangsterism; and the film's reso- lution—Dadier, now accepted by his class, cele- brates the triumph of right by disarming a schoolboy hoodlum—is alarmingly facile.

This exploration of the lower depths of the American educational system scarcely, in fact, penetrates the surface. Roughly and aggres- sively the film lashes out, dismissing causes and emphasising effects, hectoring the audience into accepting its melodramatics at their sometimes dubious face value. As directed by Richard Brooks, who also adapted the script from Evan Hunter's novel, the picture is as jagged and harsh as the jazz rhythms on its sound track. And although the sense of outrage seems authentic enough, Blackboard Jungle can be accused of making a social problem out as

worse than it is through its own unremitting savagery of tone, its deliberate exploitation of the sensational incident. There is an admirably resolute performance by Glenn Ford, as the determined idealist, and capable playing by Louis Calhern and John Hoyt as defeated col- leagues, and, in the classroom, by Sidney Poitier and a young actor, Vic Morrow, whose imitation of the Brando mannerism extends to the last slurred syllable. Blackboard Jungle makes, intermittently, its disturbing impact; it lacks, though, the foice of The Wild One, the moral responsibility that ventures beyond the easy melodramatic gesture into the territory of social comment.

The hero of The Kentuckian (Burt Lan- caster's first film as a director, in which he also plays the leading part) is a restless wanderer. a noble savage dressed in buckskin. Journeying towards Texas in the 1820s with his small son, he halts at the little township of Humility and is tempted to settle down; but the lures of prosperity and comfort will inevitably be re- sisted, for the fine, free life of the open air. It is a simple and romantic conception, de- veloped discursively and often irresolutely, as though the director's feeling for his material went some way beyond.his ability to shape and control it. The mood is sympathetic, the period detail sometimes agreeable; halting and incon- clusive, uneasily balanced between violence and gentleness, The Kentuckian still achieves an individual flavour that is not unlikeable.

At the National Film Theatre a season of John Ford's films opens on Sunday with the relatively little-known Wagonmaster. A pro- pitious introduction; for in this story of a Mormon community's hazardous journey to a new settlement Ford's vision of the West, of the untouched country, is perhaps most purely that of the poet. Disregarding to some extent the conventional demands of plot, he here cele- brates, simply, the pioneering theme. And it is the respect for human endeavour, the tradition- alist's sense of the past, that reinforce the film's visual poetry of space and distance. The wagons roll slowly westward, the lone rider races across the desolate plain, Mormons and Indians join in a convivial dance round the camp fire—here is Ford's West, recorded in finely stirring and lyrical images.