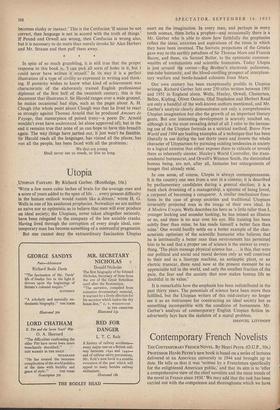 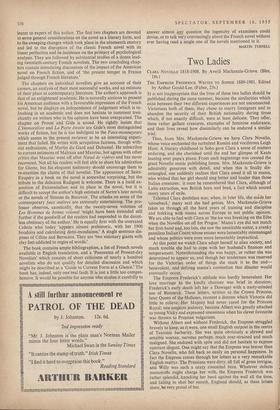 THE CONTEMPORARY FRENCH NOVEL. By Henri Peyre. (O.U.P., 30s.) PROFESSOR HENRI PEYRE'S new book is based on a series of lectures delivered at an American university in 1944 and brought up to date. He tells us that it was 'written by a Frenchman specifically for the enlightened American public,' and that its aim is to 'offer a comprehensive view of the chief novelists and the main trends of the novel in France since 1930.' We may add that the task has been carried out with the competence and thoroughness which we have learnt to expect of this author. The first two chapters are devoted to some general considerations on the novel as a literary form, and to the sweeping changes which took place in the nineteenth century and led to the disruption of the classic French novel with its linear perfection and its insistence on the primacy of psychological analysis. They are followed by substantial studies of a dozen lead- ing twentieth-century French novelists. The two concluding chap- ters contain stimulating discussions of the impact of the American novel on French fiction, and of 'the present temper in France judged through French literature.' The chapters on individual novelists give an account of their careers, an analysis of their most successful works, and an estimate of their place in contemporary literature. The author's approach is that of an enlightened academic. He is naturally anxious to present his American audience with a favourable impression of the French novel, but he displays an independence of judgement which is re- freshing in an academic and does not hesitate to comment tren- chantly on writers who in his opinion have been overpraised. The chapter on Proust and Gide is sound. He rightly insists that L'lmmoraliste and La Porte etroite are Gide's most distinguished works of fiction, but he is too indulgent to the Faux-monnayeurs which seems to the present reviewer to be an interesting experi- ment that failed. He writes with scrupulous fairness, though with- out enthusiasm, of Martin du Gard and Duhamel. He subscribes to current estimates of Malraux and Mauriac, but agrees with other critics that Mauriac went off after Nwud de viperes and has never recovered. Not all his readers will feel able to share his admiration for Giono, but his eloquent testimony should encourage them to re-examine the claims of that novelist. The appearance of Saint- Exupery in a book on the novel is somewhat surprising, but the tribute to the delicious Radiguet is welcome. There is a lucid ex- position of Existentialism and its place in the novel, but it is difficult to accept the author's high estimate of Sartre's later novels or the novels of Simone de Beauvoir. The attacks on some of the contemporary faux maitres are extremely entertaining. The pro- fessor observes, caustically, that the twenty-seven volumes of Les Hotnmes de bonne volontd 'might have been extended still further if the goodwill of the readers had responded to the daunt- less obstinacy of the author.' He is equally firm with the overrated Colette who today 'appears almost prehistoric, with her 1900 boudoirs and calculating demi-mondaines.' A single sentence dis- poses of C6line and Bernanos. They are 'two visionary giants with clay feet addicted to orgies of words.' The bookcontains ample bibliographies, a list of French novels available in English translation, and a 'Panorama of Present-day Novelists' which consists of short criticisms of nearly a hundred novelists who do not qualify for detailed discussion and which might be described as a 'Guide to Current Form at a Glance.' The book has, indeed, only one real fault. It is just a little too compre- hensive. It would be possible for anyone who studies it carefully to answer almost any question the ingenuity of examiners could devise, or to talk very convincingly about the French novel without ever having read a single one of the novels mentioned in it.