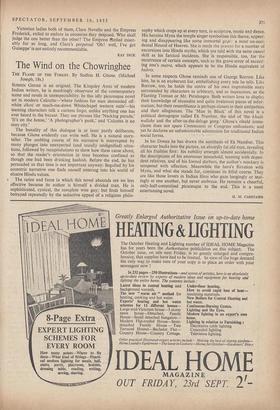 The Wind on the Chowringhee

THE FLAME OF THE FOREST. By Sudhin H. Chose. (Michael Joseph, 18s.) SUDHIN GHOSE is an original. The Kingsley Amis of modern Indian writers, he is mockingly observant of the contemporary scene and revels in unrespectability. In this idly picaresque novel set in modern Calcutta—'where fashion for men demanded off- white dhoti or reach-me-down Whitechapel western suits'—his teeming characters talk a curious lingo, unlike anything one has ever heard in the bazaar. They use phrases like 'Necking parade,' 'It's on the house,' 'A photographer's punk,' and 'Calcutta is no sissy city.'

The banality of this dialogue is at least partly deliberate, because Chose evidently can write well. He is a natural story- teller. The ambling course of his narrative is interrupted by many plunges into unexpected (and usually undignified) situa- tions, followed by recapitulations to show how these came about, so that the reader's orientation in time becomes confused as though one had been drinking hashish. Before the end, he has persuaded us that time is not important anyway. Beguiled by his eccentric narrative one finds oneself entering into his world of elusive Hindu values.

• The satire and farce in which this novel abounds are no less effective because its author is himself a divided man. He is sophisticated, cynical, the complete wise guy; but finds himself betrayed repeatedly by the seductive appeal of a religious philo-

sophy which crops up at every turn, in sculpture, music and dance. His heroine Myna the temple singer symbolises this theme, appear. ing and disappearing like some immortal gopi: a most un-occi- dental Hound of Heaven. She is made the pretext for a number of excursions into Hindu myths, which are told with the same casual skill as his farcical incidents. She is responsible, too, for the recurrence of certain concepts, such as the grave error of exceed- ing one's tnatra, which appears to be the Hindu equivalent of hubris.

In some respects Ghose reminds one of George Borrow. Like him, he is an exuberant liar, embellishing every tale he tells. Like Borrow, too, he holds the centre of his own improbable story surrounded by characters as arbitrary, and as loquacious, as the Flaming Tinman or Mr. Petulengro. Both writers love to display their knowledge of recondite and quite irrelevant pieces of infor- mation; but their resemblance is perhaps closest in their antipathies and their allegiances. The 'Man in Black' of this novel is a political demagogue called Ek Nambur, the idol of 'the khadi- wallahs and the after-us-the-deluge gang.' Ghose's ribald icono- clasm does not spare Communist or Congress enthusiasts; and yet he declares an unfashionable admiration for traditional Indian social forms.

In his Diwan he has drawn the antithesis of Ek Nambur. This character backs into the picture, an absurdly fat old man, revealing all his frailties first: his nobility emerges almost accidentally. In the descriptions of his enormous household, teeming with depen- dent relatives, and of his formal darbars, the author's mockery is tempered with affection. Meanwhile the hero's flirtation with Myna, and what she stands for, continues 'its fitful course. They are like those lovers in Indian films who gaze longingly or teas- ingly at one another, but never embrace. He remains a cheerful, only-half-committed picaresque to the end. This is a most entertaining novel.