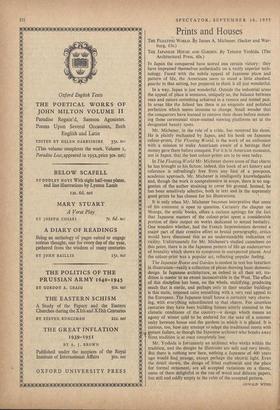 THE JAPANESE HOUSE AND GARDEN. By Tetsuro Yoshida. (The Architectural Press, 60s.) IN Japan the conquered have scored one certain victory: they have impressed themselves [esthetically on a vastly superior tech- nology. Faced with the subtle appeal of Japanese place and pattern of life, the Americans seem to stand a little abashed, gauche in that setting, but prepared to think it all just wonderful.

In a way, Japan is just wonderful. Outside the industrial areas the appeal.of place is sensuous, uniquely so, the balance between man and nature something achieved in a remote and misted past. In areas like the Inland Sea there is an exquisite and polished perfection which seems immune to change. Small wonder that the conquerors have learned to remove their shoes before mount- ing those ceremonial straw-matted viewing platforms set at the designated beauty spots.

Mr. Michener, in the role of a critic, has removed his shoes. He is plainly enchanted by Japan, and his book on Japanese colour-prints, The Floating World, is the work of an enthusiast with a mission to make Americans aware of a heritage their money gave them before conquest. For it is in American museums, not in Japan, that the best colour-prints are to be seen today.

In The Floating World Mr. Michener shows some of that charm he has brought to his fiction; indeed, this book of art history and reference is refreshingly free from any hint of a pompous, academic approach. Mr. Michener is intelligently knowledgeable and, though the work is comprehensive in scope, there is no sug- gestion of the author straining to cover his ground. Instead, he has been sensitively selective, both in text and in the supremely good prints he has chosen for his illustrations.

It is only when Mr. Michener becomes interpretive that some of his comment is open to question. Certainly the chapter on Shunga, the erotic books, offers a curious apology for the fact that Japanese masters of the colour-print spent a considerable portion of their output on works dedicated to sexual bestiality. One wonders whether, had the French Impressionists devoted a major part of their creative effort to brutal pornography, critics would have dismissed this as an understandable indication of virility. Unfortunately for Mr. Michener's studied casualness on this point, there is in the Japanese pattern of life an undercurrent of brutality which shows its symptoms in unexpected places. And the colour-print was a popular art, reflecting popular feeling.

The Japanese House and Garden is modest in text but luxuriant in illustration—really a collection of plates showing basic domestic design. In Japanese architecture, as indeed in all their art, tra- dition is master to an extent inconceivable in the West. The effect of this discipline has been, on the whole, stultifying, producing much that is sterile, and perhaps only in their smaller buildings is this static, imposed calm something with a very real appeal to the European. The Japanese small house is certainly very charm- ing, with everything subordinated to that charm. For countless centuries they have been building houses utterly unsuited to the climatic conditions of the country—a design which means an agony of winter cold to be endured for the sake of a summer unity between house and the gardens in which it is placed. It is curious, too, how any attempt to adapt the traditional meets with -stant failure, as though the Japanese architect who breaks away from tradition is at once completely lost.

Mr. Yoshida is fortunately an architect who works within the tradition, and the designs he illustrates are safe and very lovely. But there is nothing new here, nothing a Japanese of 400 years ago would find strange, except perhaps the electric light. Even the detail shown, the design of fitted cupboards and the place for formal ornament, are all accepted variations on a theme, some of them delightful in the use of wood and delicate papers, but still and oddly empty in the calm of the accepted pattern.