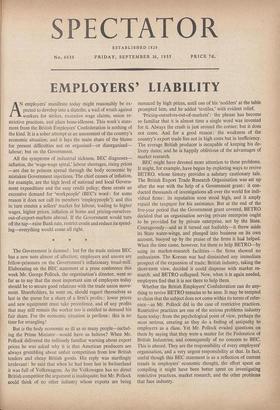 N N employers' manifesto today might reasonably be ex- pected to develop into a diatribe, a wail of wrath against workers for strikes, excessive wage claims, union re- strictive practices, and plain bone-idleness. This week's state- ment from the British Employers' Confederation is nothing of the kind. It is a sober attempt at an assessment of the country's economic situation; and it lays the main share of the-blame for present difficulties not on organised—or disorganised— labour; but on the Government.

All the symptoms of industrial sickness, BEC diagnoses— inflation, the 'wage-wage spiral,' labour shortages, rising prices —are due to poisons spread through the body economic by mistaken Government injections. The chief causes of inflation, for example, are the high level of national and local Govern- ment expenditure and the easy credit policy; these create an excessive demand for 'workpeople' (BEC's word : for some reason it does not call its members 'employpeople'); and this in turn creates a sellers' market for labour, leading to higher wages, higher prices, inflation at home and pricing-ourselves- out-of-export-markets abroad. If the Government would turn off the tap—raise Bank rate, restrict credit and reduce its spend- ing—everything would come all right.

The Government is damned : but for the trade unions BEC has a new note almost of affection; employers and unions are fellow-prisoners on the Government's inflationary tread-mill. Elaborating on the BEC statement at a press conference this week Mr. George Pollock, the organisation's director, went so - far as to say that the most important aim of employers today should be to secure good relations with the trade union move- ment. Shareholders, he went on, should regard themselves as last in the queue for a share of a firm's profits : lower prices and new equipment must take precedence, and of any profits that may still remain the worker too is entitled to demand his fair share. For the economic situation is perilous : this is no time for wrangling!

But is the body economic so ill as so many people—includ- ing the Prime Minister—would have us believe? When Mr.

Pollock delivered the tediously familiar warning about export prices he was asked why it is that American producers are always grumbling about unfair competition from low British tenders and cheap British goods. His reply was startlingly irrelevant : he said that when he had been last in Switzerland it was full of Volkswagens. As the Volkswagen has no direct British competitor the argument is inadequate; but Mr. Pollock could think of no other industry whose exports are being menaced by high prices, until one of his `nodders' at the table prompted him, and he added 'textiles,' with evident relief.

'Pricing-ourselves-out-of-markets' : the phrase has become so familiar that it is almost time a single word was invented for it. Always the crash is just around the corner; but it does not come. And for a good reason : the weakness of the country's export trade lies not in high costs but in inefficiency. The average British producer is incapable of keeping his de- livery dates; and he is happily oblivious of the advantages of market research.

BEC might have devoted more attention to these problems. It might, for example, have begun by exploring ways to revive BETRO, whose history provides a salutary cautionary tale. The British Export Trade Research Organisation was set up after the war with the help of a Government grant : it con- ducted thousands of investigations all over the world for indi- vidual firms : its reputation soon stood high, and it amply repaid the taxpayer for his assistance. But at the end of the five-year period that the Government grant covered, BETRO decided that an organisation serving private enterprise ought to be provided for by private enterprise, not by the State. Courageously—and as it turned out foolishly—it threw aside its State water-wings, and plunged into business on its own account, buoyed up by the praise of the firms it had helped. When the time came, however, for them to help BETRO—by using its market-research facilities — the firms showed no enthusiasm. The Korean war had diminished any immediate prospect of the expansion of trade; British industry, taking the short-term view, decided it could dispense with market re- search; and BETRO collapsed. Now, when it is again needed, employers find that it is not there to help them.

Whether the British Employers' Confederation can do any- thing to revive BETRO remains to be seen. It may be tempted to claim that the subject does not come within its terms of refer- ence—as Mr. Pollock did in the case of restrictive practices. Restrictive practices are one of the serious problems industry faces today; from the psychological point of view, perhaps the most serious, creating as they do a feeling of antipathy to employers as a class. Yet Mr. Pollock evaded questions on them by saying that they were a matter for the Federation of British Industries, and consequently of no concern to BEC. This is absurd. They are the responsibility of every employers' organisation, and a very urgent responsibility at that. In fact, useful though this BEC statement is as a reflection of current trends in employers' economic .thought, the effort spent on compiling it might have been better spent on investigating restrictive practices, market research, and the other problems that face industry.