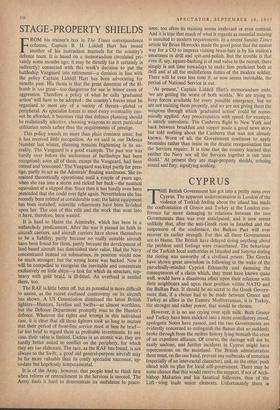 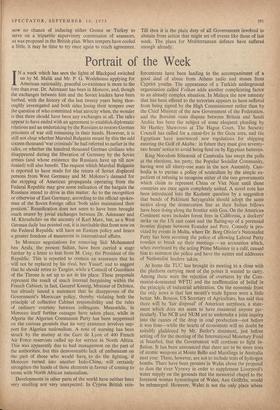 THE British Government has got into a pretty mess over Cyprus. The apparent underestimation in London of the violence of Turkish feeling about the island has made the confrontation of Greece and Turkey at the London con- ference far more damaging to relations between the two Governments than was ever anticipated; and it now seems unlikely that, after the anti-Greek riots in Istanbul and the suspension of the conference, the Balkan Pact will ever recover its earlier strength. For this all three Governments are to blame. The British have delayed doing anything about the problem until feelings were exacerbated. The behaviour of the Turkish local authorities in Istanbul and Smyrna during the rioting was unworthy of a civilised power. The Greeks have shown great unwisdom in following in the wake of the parochially-minded Cypriot Ethnarchy and damning the consequences of a claim which, they must have known quite well, would have a disastrous effect upon their relations with their neighbours and upon their position within NATO and the Balkan Pact. It should be no secret to the Greek Govern- ment that, if a choice had to be made between Greece and Turkey as allies in the Eastern Mediterranean, it is Turkey, the stronger and richer power, that would be chosen.

However, it is no use crying over spilt milk. Both Greece and Turkey have been shOcked into a more conciliatory mood, apologetic Notes have passed, and the two Governments are evidently concerned to extinguish the flames that so suddenly broke through from the molten history lying beneath the crust of an expedient alliance. Of course, the damage will not be easily undone, and further incidents in Cyprus might have repercussions on the mainland. The British administration there must, on the one hand, prevent any outbreaks of terrorism (especially of an inter-racial character), and, on the other, push ahead with its plan for local self-government. There may be some chance that this would receive the support, if not of Arch- bishop Makarios and his fanatical followers, then of the Left - wing trade union elements. Unfortunately there is now no chance of inducing either Greece or Tuikey to serve on a tripartite supervisory commission of assessors, as was proposed in the British plan. When tempers have cooled a little, it may be time to try once again to reach agreement. Till then it is the plain duty of all Governments involved to abstain from action that might set off events like those of last week. The plans for Mediterranean defence have suffered enough already.