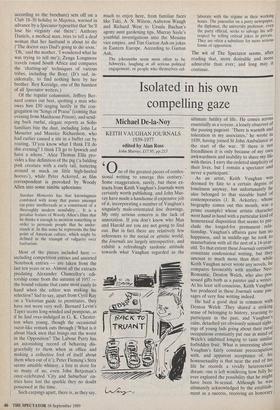 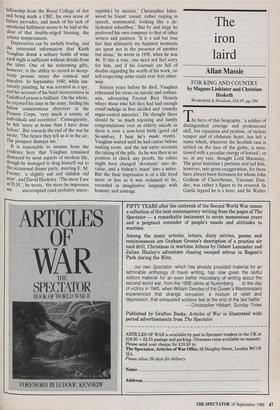 Isolated in his own compelling gaze

0 ne of the greatest pieces of confes- sional writing to emerge this century.' Some exaggeration, surely, but these ex- tracts from Keith Vaughan's Journals were certainly worth publishing, and John Mur- ray have made a handsome if expensive job of it, incorporating a number of Vaughan's singularly male-orientated line drawings. My only serious concern is the lack of annotation. If you don't know who Max and Harold are you are not going to find out. But in fact there are relatively few references to the social or artistic world; the Journals are largely introspective, and exhibit a refreshingly sardonic attitude towards what Vaughan regarded as the ultimate futility of life. He comes across essentially as a voyeur, a lonely observer of the passing pageant. 'There is warmth and toleration in my associates,' he wrote in 1939, having joined St John Ambulance at the start of the war. 'If there is not friendliness it is only because of my own awkwardness and inability to share my life with theirs. I envy the ordered simplicity of their lives, but I remain a spectator and never a participant.' As an artist, Keith Vaughan was doomed by fate to a certain degree of loneliness anyway, but unfortunately he also belonged to that sizeable band of contemporaries (J. R. Ackerley, whose biography comes out this month, was a prime example) whose artistic character went hand in hand with a particular kind of homosexual disposition that seems to pre- clude the longed-for permanent rela- tionship. Vaughan's affaires gave him no happiness, and in middle-age he took to masturbation with all the zest of a 14-year- old. To that extent these Journals certainly constitute confessional writing, but they amount to much more than that; while Keith Vaughan never wrote any novels, he compares favourably with another Neo- Romantic, Denton Welch, who also pos- sessed gifts both as a painter and a writer. At his least self-conscious, Keith Vaughan has produced in these Journals some pas- sages of very fine writing indeed.

He had a good deal in common

with Denton Welch. They shared a striking sense of belonging to history, yearning to participate in the past, and Vaughan s calm, detached yet obviously sensual sight- ings of young lads going about their rural occupations constantly put one in mind of Welch's inhibited longing to taste similar forbidden fruit. What is interesting about Vaughan's fairly constant preoccupation with, and apparent acceptance of. 1.1?.5 homosexuality is that near the end of his life he records a vividly heterosexual dream: one is left wondering how fully he ever explored the possibility that he might have been bi-sexual. Although he was ultimately acknowledged by the establish- ment as a success, receiving an honorary, fellowship from the Royal College of Art and being made a CBE, his own sense of failure pervades, and much of his lack of emotional fulfilment seems to be laid at the door of that double-edged blessing, the artistic temperament.

Depressives can be awfully boring, and the reiterated information that Keith Vaughan drank a solitary bottle of wine each night is sufficient without details from the label. One of his redeeming gifts, however, is the ability to record in decep- tively prosaic terms the comical and macabre. In September 1940, while inn- ocently painting, he was arrested as a spy, and his account of his brief incarceration in Guildford prison is brilliant. On the whole, he enjoyed his time in the army, finding his fellow conscientious objectors in the Pioneer Corps, 'very much a society of individuals and eccentrics'. Consequently, he felt 'more at home than I have done before'. But towards the end of the war he Wrote, 'The future they tell us is in the air. The prospect dismays me.' It is reasonable to assume from the evidence here that Vaughan remained dismayed by most aspects of modern life, though he managed to drag himself out to the occasional dinner party, meeting E. M. Forster, 'a slightly sad and childish old Man', and David Hockney. 'The more I see of D.H.', he wrote, 'the more he impresses Me • . . uncorrupted (and probably uncor- ruptible) by success.' Christopher Isher- wood he found 'casual, rather rasping in speech, sentimental, looking like a de- hydrated schoolboy.' But by and large he preferred his own company to that of other writers and painters. 'It is a sad but true fact that ultimately my happiest moments are spent not in the presence of another but alone,' he wrote in 1958, when he was 46. If this is true, one need not feel sorry for him, and if his Journals are full of doubts regarding the worth of his work, no self-respecting artist could ever feel other- wise.

Sixteen years before he died, Vaughan rehearsed his views on suicide and euthan- asia, advocating Eternal Rest Hostels where those who felt they had had enough could indulge in free alcohol and 'crunchy sugar-coated narcotics'. He thought there should be 'as much rejoicing and family congratulations over an elderly suicide as there is over a new-born birth (good old So-and-so, I hear he's made room): Vaughan waited until he had cancer before making room, and the last entry recounts the taking of the pills. As he was then in no position to check any proofs, his editor might have changed 'devaluate' into de- value, and a bishop's 'mace' into a mitre. But the final impression is of a life lived more or less as it was ordained to be, recorded in imaginative language with honesty and courage.