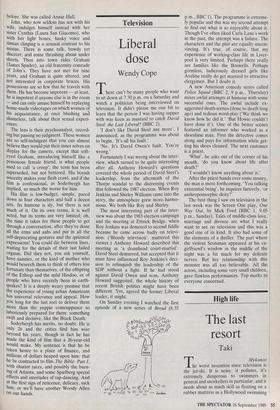 There can't be many people who want to sit down at 7.50 p.m. on a Saturday and watch a politician being interviewed on television. It didn't please me one bit to learn that the person I was having supper with was keen as mustard to catch David Steel: the Last Liberal? (BBC 2). 'I don't like David Steel any more', I announced, as the programme was about to begin. 'It's all his fault.' 'No. It's David Owen's fault. You're wrong.' Fortunately I was wrong about the inter- view, which turned to be quite interesting after all. Anthony Howard's questions covered the whole period of David Steel's leadership, from the aftermath of the Thorpe scandal to the distressing events that followed the 1987 election. When Roy Jenkins and Shirley Williams came into the story, the atmosphere grew more, harmo- nious. We both like Roy and Shirley. • The most interesting part of the inter- view was about the 1983 election campaign and the meeting at Ettrick Bridge, when Roy Jenkins was demoted to second fiddle because he came across badly on televi- sion. ('Bloody television', muttered this viewer.) Anthony Howard described this meeting as 'a drumhead court-martial'. David Steel demurred, but accepted that it must have influenced Roy Jenkins's deci- sion to relinquish the leadership of the SDP without a fight. If he had stood against David Owen and won, Anthony Howard suggested, the whole history of recent British politics might have been different. Yes, agreed the former Liberal leader, it might.

On Sunday evening I watched the first episode of a new series of Bread (8.35 p.m., BBC 1). The programme is extreme- ly popular and this was my second attempt to find out what is so enjoyable about it. Though I've often liked Carla Lane's work in the past, the attempt was a failure. The characters and the plot are equally uncon- vincing. It's true, of course, that my experience of working-class life in Liver- pool is very limited. Perhaps there really are families like the Boswells. Perhaps gormless, ludicrously dressed girls like Aveline really do get married to attractive clergymen. But I doubt it.

A new American comedy series called Police Squad (BBC 2, 9 p.m., Thursday) mixes awful attempts at humour with some successful ones. The awful include ex- aggerated death scenes (done to death long ago) and tedious word-play ('We think we know how he did it.' But Howie couldn't have done it'). One of the better scenes featured an informer who worked as a shoeshine man. First the detective comes along and pays for information while get- ting his shoes cleaned. The next customer is a priest.

'What', he asks out of the corner of his mouth, `do you know about life after death?'

wouldn't know anything about it.'

After the priest hands over some money, the man is more forthcoming. 'You talking existential being', he inquires furtively, 'or anthropomorphic deity?'

The best thing I saw on television in the last week was the Screen One play, One Way Out, by Mick Ford (BBC 1, 9.05 p.m., Sunday). Tales of middle-class love, marriage and divorce are what I really want to see on television and this was a good one of its kind. It also had some of the elements of a thriller. The part where the violent Scotsman appeared at his ex- girlfriend's window in the middle of the night was a bit much for my delicate nerves. But her relationship with this monster was all too believable. All the actors, including some very small children, gave flawless performances. Top marks to everyone concerned.