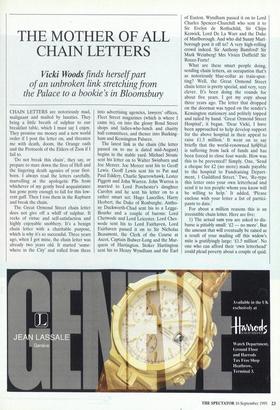 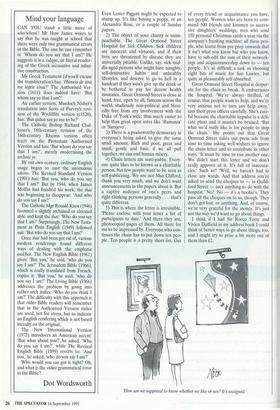 THE MOTHER OF ALL CHAIN LETTERS

CHAIN LETTERS are notoriously mad, malignant and mailed by lunatics. They bring a little breath of sulphur to our breakfast table, which I must say I enjoy. They promise me money and a new world order if I post the letter on, and threaten me with death, doom, the Orange oath and the Protocols of the Elders of Zion if I fail to.

`Do not break this chain', they say, or prepare to stare down the fires of Hell and the lingering death agonies of your first- born. I always read the letters carefully, marvelling at the apologetic PSs from whichever of my gently bred acquaintance has gone potty enough to fall for this low- rent guff. Then I toss them in the Rayburn and break the chain.

The Great Ormond Street chain letter does not give off a whiff of sulphur. It reeks of virtue and self-satisfaction and highly enjoyable snobbery. It's a benign chain letter with a charitable purpose, which is why it's so successful. Three years ago, when I got mine, the chain letter was already two years old. It started 'some- where in the City' and rolled from there into advertising agencies, lawyers' offices, Fleet Street magazines (which is where I came in), on into the glossy Bond Street shops and ladies-who-lunch and charity ball committees, and thence into Bucking- ham and Kensington Palaces.

The latest link in the chain (the letter passed on to me is dated mid-August) begins in the stable yard. Michael Stoute sent his letter on to Walter Swinburn and Joe Mercer. Joe Mercer sent his to Geoff Lewis. Geoff Lewis sent his to Pat and Paul Eddery, Charlie Sparrowhawk, Lester Piggott and John Warren. John Warren is married to Lord Porchester's daughter Carolyn and he sent his letter on to a rather smart set: Hugo Lascelles, Harry Herbert, the Duke of Roxburghe. Antho- ny Duckworth-Chad sent his to a Legge- Bourke and a couple of barons: Lord Chetwode and Lord Leicester. Lord Chet- wode sent his to Lord Fairhaven, Lord Fairhaven passed it on to Sir Nicholas Beaumont, the Clerk of the Course at Ascot, Captain Bulwer-Long and the Mar- quess of Hartington. Stoker Hartington sent his to Henry Wyndham and the Earl of Euston. Wyndham passed it on to Lord Charles Spencer-Churchill who sent it to Sir Evelyn de Rothschild, Sir Chips Keswick, Lord De La Warr and the Duke of Marlborough. And who did Sunny Marl- borough post it off to? A very high-rolling crowd indeed. Sir Anthony Bamford! Sir Mark Weinberg! Mrs Vivien Duffield! Sir Rocco Forte!

What are these smart people doing, sending chain letters, an occupation that's as notoriously blue-collar as train-spot- ting? Well, the Great Ormond Street chain letter is pretty special, and very, very clever. It's been doing the rounds for about five years. I got my copy about three years ago. The letter that dropped on the doormat was typed on the sender's Kensington stationery and politely topped and tailed by hand. 'Great Ormond Street Hospital', it began. 'Dear Vicki, I have been approached to help develop support for the above hospital in their appeal to raise £1.5 million.' It went on to say briefly that the world-renowned hospital is suffering from lack of funds and has been forced to close four wards. How was this to be prevented? Simply. One, 'Send a cheque for £2 (no more) made payable to the hospital to Fundraising Depart- ment, 1 Guildford Street.' Two, 'Re-type this letter onto your own letterhead and send it to ten people whom you know will be willing to help.' It added, 'Please enclose with your letter a list of partici- pants to date.'

For about a million reasons this is an irresistible chain letter. Here are five: 1) The actual sum you are asked to dis- burse is pitiably small: 12 — no more'. But the amount that will eventually be raised as a result of your mailing off this widow's mite is gratifyingly large: '£1.5 million'. No one who can afford their 'own letterhead' could plead poverty about a couple of quid. Even Lester Piggott might be expected to stump up. It's like buying a poppy, or an Alexandra Rose, or a couple of Sunday papers.

2) The object of your charity is unim- peachable. The Great Ormond Street Hospital for Sick Children. Sick children are innocent and virtuous, and if their lives are threatened by disease they are universally pitiable. Unlike, say, sick mid- dle-aged persons who might have naughty, self-destructive habits and unhealthy lifestyles, and deserve to go to hell in a handcart if they won't give up the drink or be bothered to pay for decent health insurance. Great Ormond Street is close at hand, free, open to all, famous across the world, studiously non-political and bless- edly free from any involvement with the Duke of York's wife; thus much easier to help than great open sores like 'Rumania' or 'Sarajevo'.

3) There is a praiseworthy democracy in everyone's being asked to give the same small amount. Rich and poor, great and small, gentle and base, if we all pull together, we can end human misery.

4) Chain letters are semi-public. Every- one quite likes to be known as a charitable person, but few people want to be seen as self-publicising. We are not Max Clifford, thank you very much, and we don't want announcements in the papers about it. But a captive audience of one's peers and right-thinking persons generally . . . that's quite different.

5) This is where the letter is irresistible. 'Please enclose with your letter a list of participants to date.' And there they are, photocopied pages of them. All there for me to be impressed by. Everyone who con- tinues the chain has to put down ten peo- ple. Ten people is a pretty short list. Out of every friend or acquaintance you have, ten people. Women who are born to com- mand 500 friends and kinsmen to succes- sive daughters' weddings; men who send 150 personal Christmas cards a year via the company's franking machine; all these peo- ple, who learnt from pre-prep onwards that it isn't what you know but who you know, have to sub-edit the sum of their network- ings and acquaintanceship down to — ten people. It's as difficult a task as choosing eight bits of music for Sue Lawley, but quite as pleasurably self-absorbed.

Great Ormond Street Hospital is desper- ate for the chain to break. It embarrasses the hospital. 'We're always thrilled, of course, that people want to help, and we're very anxious not to turn any help away,' says their press officer carefully. She's care- ful because the charitable impulse is a deli- cate plant and it mustn't be bruised. 'But what we'd really like is for people to stop the chain.' She points out that Great Ormond Street takes out press ads from time to time asking well-wishers to ignore the chain letter and to contribute in other ways. 'It must be time to run another one. We didn't start this letter and we don't really approve of it. It's full of inaccura- cies.' Such as? 'Well, we haven't had to close any wards. And that address you're asked to send the cheques to — in Guild- ford Street — isn't anything to do with the hospital.' No? 'No — it's a bookie's. They pass all the cheques on to us, though. They don't get lost, or anything. And, of course, we're very grateful for the money. It's just not the way we'd want to go about things.'

I think if I had Sir Rocco Forte and Vivien Duffield in my address book I could think of better ways to go about things, too, and I might try to prise a bit more out of them than £2.

'How are we supposed to know whether we like or not? It's unsigned.'