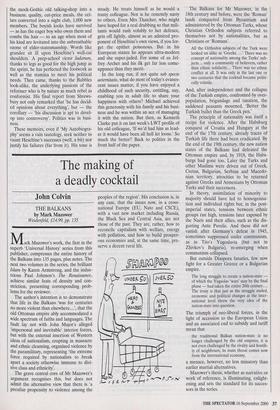 The making of a deadly cocktail

THE BALKANS by Mark Mazower Weidenfeld, £14.99, pp. 135 Mark Mazower's work, the first in the superb 'Universal History' series from this publisher, compresses the entire history of the Balkans into 135 pages, plus notes. The next two volumes in the series, the brilliant Islam by Karen Armstrong, and the indus- trious Paul Johnson's The Renaissance, achieve similar feats of density and con- striction, presenting corresponding prob- lems for the reviewer.

The author's intention is to demonstrate that life in the Balkans 'was for centuries no more violent than elsewhere...', that the old Ottoman empire ably accommodated a wide spectrum of faiths and languages. The fault lay not with John Major's alleged `impersonal and inevitable' interior forces, but with the external insertion of Western ideas of nationalism, erupting in massacre and ethnic cleansing, organised violence by the ,paramilitary, representing 'the extreme force required by nationalists to break apart a society otherwise immune to divi- sive class and ethnicity'.

The grave central core of Mr Mazower's argument recognises this, but does not admit the alternative view that there is 'a peculiar propensity to violence among the peoples of the region'. His conclusion is, in any case, that the issues now, in a cross- national Europe (EU, Nato and CSCE), with a vast new market including Russia, the Black Sea and Central Asia, are not those of the past. They are, rather, how to reconcile capitalism with welfare, energy with pollution, and how to build prosper- ous economies and, at the same time, pre- serve a decent rural life. The Balkans for Mr Mazower, in the 18th century and before, were the 'Roman' lands conquered from Byzantium and administered by the Ottoman Turks, whose Christian Orthodox subjects referred to themselves not by nationalities, but as Christians or 'Romans'.

All the Orthodox subjects of the Turk were looked on alike as `Greeks....' There was no concept of nationality among the Turks' sub- jects... only a community of believers, rather than ethnic solidarity.... There was no ethnic conflict at all. It was only in the last one or two centuries that the cocktail became politi- cally volatile.

And, after independence and the collapse of the Turkish empire, confronted by over- population, brigandage and taxation, the saddened peasants mourned, 'Better the Turkish bullet than the Greek pen.'

The principle of nationality was itself a recipe for violence, After the Habsburg conquest of Croatia and Hungary at the end of the 17th century, already traces of Turkish life there had been eradicated. By the end of the 19th century, the new nation states of the Balkans had defeated the Ottoman empire and, by 1918, the Habs- burgs had gone too. Later the Turks and other Muslims were driven out of Greek, Cretan, Bulgarian, Serbian and Macedo- nian territory, atrocities to be returned against Greeks and Armenians by Ottoman Turks and their successors.

In theory, assimilation of minority to majority should have led to homogenisa- tion and individual rights but, in the post- imperial states, tensions between ethnic groups ran high, tensions later exposed by the Nazis and their allies, such as the dis- gusting Ante Pavelic. And these did not vanish after Germany's defeat in 1945, sometimes suppressed under communism, as in Tito's Yugoslavia (but not in Zhivkov's Bulgaria), re-emerging when communism collapsed.

But outside Diaspora fanatics, few now fight for a Greater Greece or a Bulgarian empire.

The long struggle to create a nation-state of which the Yugsolav 'wars' may be the final phase — had taken the entire 20th century.... The irony is that just as the struggle ended, economic and political changes at the inter- national level threw the very idea of the nation-state into question.

The triumph of neo-liberal forces, in the light of accession to the European Union and an associated end to subsidy and tariff mean that

the traditional Balkan nation-state is no longer challenged by the old empires; it is not even challenged by the rivalry and hostili- ty of neighbours; its main threat comes now from the international economy,

a menace, however, no less minatory than earlier martial alternatives.

Mazower's thesis, whether as narrative or work of reference, is illuminating, enlight- ening and sets the standard for its succes- sors in the series.