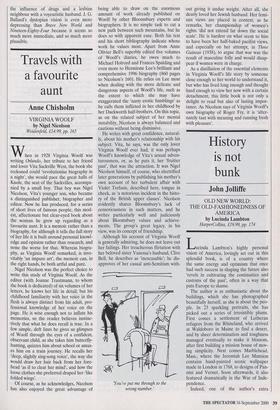 Travels with a favourite aunt

VIRGINIA WOOLF by Nigel Nicolson Weidenfeld, £14.99, pp. 165 hen in 1928 Virginia Woolf was writing Orlando, her tribute to her friend and lover Vita Sackville West, the book she reckoned could 'revolutionise biography in a night', she would pace the great halls of Knole, the seat of the Sackvilles, accompa- nied by a small boy. That boy was Nigel Nicolson, Vita's younger son, who became a distinguished publisher, biographer and editor. Now he has produced, for a series of short lives of famous people, this mod- est, affectionate but clear-eyed book about the woman he grew up regarding as a favourite aunt. It is a memoir rather than a biography, for although it tells the full story of her life it is built around personal knowl- edge and opinion rather than research, and none the worse for that. Whereas biogra- phy, as Virginia Woolf remarked, is ine- vitably 'an impure art', the memoir can, in the right hands, be both artful and pure.

Nigel Nicolson was the perfect choice to write this study of Virginia Woolf. As the editor (with Joanne Trautmann, to whom the book is dedicated) of six volumes of her letters, he knows her life in detail; but his childhood familiarity with her voice in the flesh is always distinct from his adult, pro- fessional knowledge of her voice on the page. He is wise enough not to inflate his memories, so the reader believes instinc- tively that what he does recall is true. In a few simple, deft lines he gives us glimpses of Woolf through the eyes of a confident, observant child, as she takes him butterfly- hunting, quizzes him about school or amus- es him on a train journey. He recalls her `deep, slightly sing-song voice', the way she would draw her hair back from her fore- head 'as if to clear her mind', and how the loose clothes she preferred draped her 'like folded wings'.

Of course, as he acknowledges, Nicolson has also enjoyed the great advantage of being able to draw on the enormous amount of work already published on Woolf by other Bloomsbury experts and biographers. It is no simple task to cut a new path between such mountains, but he does so with • apparent ease. Both his text and his short bibliography indicate whose work he values most. Apart from Anne Olivier Bell's superbly edited five volumes of Woolf's diaries, he owes much to Michael Holroyd and Frances Spalding and even more to Hermione Lee's brilliant and comprehensive 1996 biography (860 pages to Nicolson's 160). He relies on Lee most when dealing with the more delicate and dangerous aspects of Woolf's life, such as the extent to which she may have exaggerated the 'nasty erotic fumblings' as he calls them inflicted in her childhood by her Duckworth half-brothers. On this topic, as on the related subject of her mental instability, .Nicolson is always balanced and cautious without being dismissive.

He writes with great confidence, natural- ly, about his mother's relationship with his subject. Vita, he says, was the only lover Virginia Woolf ever had; it was perhaps Woolf's knowledge of Vita's sexual adven- turousness, or, as he puts it, her 'fruitier past', that was the attraction. It was Nigel Nicolson himself, of course, who electrified later generations by publishing his mother's own account of her turbulent affair with Violet Trefusis, described here, tongue in cheek, as 'a notorious incident in the histo- ry of the British upper classes'. Nicolson evidently shares Bloomsbury's lack of censoriousness in such matters, and he writes particularly well and judiciously about Bloomsbury values and achieve- ments. The group's great legacy, in his view, was its concept of friendship.

Although his account of Virginia Woolf is generally admiring, he does not leave out her failings. Her treacherous flirtation with her beloved sister Vanessa's husband, Clive Bell, he describes as 'inexcusable'; he dis- approves of her casual anti-Semitism with- `You've put me through to the wrong number.' out giving it undue weight. After all, she dearly loved her Jewish husband. Her femi- nist views are placed in context; as he remarks, her championship of women's rights 'did not extend far down the social scale'. He is hardest on what seem to him to have been her half-baked pacifist views, and especially on her attempt, in Three Guineas (1938), to argue that war was the result of masculine folly and would disap- pear if women were in charge.

As a distillation of the essential elements in Virginia Woolf's life story by someone close enough to her world to understand it, but who has lived long enough and thought hard enough to view her now with a certain detachment, this little book is not only a delight to read but also of lasting impor- tance. As Nicolson says of Virginia Woolf's own biography of Roger Fry, it is 'alter- nately taut with meaning and running fresh with pleasure'.