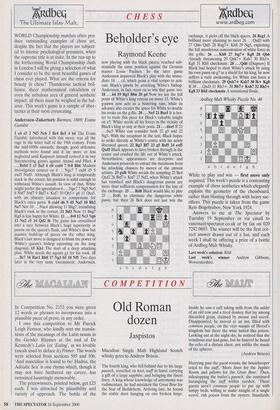 WORLD Championship matches often pro- duce outstanding examples of chess art, despite the fact that the players are subject- ed to intense psychological pressures, when the supreme title is at stake. In the run-up to the forthcoming World Championship clash in London I will be giving a selection of what I consider to be the most beautiful games of chess ever played. What are the criteria for beauty in chess? Thunderous tactical bril- liance, sheer mathematical calculation or even the nebulous area of general aesthetic impact: all these must be weighed in the bal- ance. This week's game is a sample of fiber- tactics at their most coruscating.

Anderssen–Zukertort: Barmen, 1869; Evans Gambit 1 e4 e5 2 Nf3 Nc6 3 Bc4 Bc5 4 b4 The Evans Gambit, introduced with this move, was all the rage in the latter half of the 19th century. From the mid-1890s onwards, though, good defensive methods were found and it lay more or less neglected until Kasparov himself revived it in two buccaneering games against Anand and Piket. 4

diate 18 c4, which gains a vital tempo to acti- vate Black's pawns by attacking White's bishop. Anderssen, in fact, went on to win that game too. 18 ...b4 19 Rgl Bb6 20 g4 Now we see the full point of White's king retreat on move 15. White's g-pawn now acts as a battering ram, while its advance also creates the space for White to double his rooks on the g-file. 20 ... Ne5 21 BxeS It is bet- ter to trade this piece for Black's valuable knight on e5. White needs all his forces in the vicinity of Black's king to stay at their posts. 21 ...d,xe5 If 21

fxe5 White can consider both 22 g5 and 22 Ng5. With the recapture in the text, Black hopes to strike directly at White's centre with his newly liberated queen. 22 Rg3 Rf7 23 g5 Bxf5 24 exf5 Qxd5 Black appears to have broken through in the centre and crushed the life out of White's attack. Nevertheless, appearances are deceptive and Anderssen proceeds to extract the maximum from his attacking chances by moves of the utmost artistry. 25 gxf6 White avoids the tempting 25 Bc4 Qxd2 26 Bxf7+ Kxf7 27 Nd2, when White's attack has vanished and Black's dangerous pawns are more than sufficient compensation for the loss of the exchange. 25 ...RdS Black would like to play 25 ... Rxf6, to eliminate the dangerous white pawn, but then 26 Bc4 does not just win the exchange, it picks off the black queen, 26 Regl A

Ardbeg Malt Whisky Puzzle No. 46 White to play and win — first move only required. This week's puzzle is a contrasting example of chess aesthetics which elegantly exploits the geometry of the chessboard, rather than blasting through with heavy sac- rifices. This puzzle is taken from the game Reti–Bogolyubov, New York 1924.

Answers to me at The Spectator by Tuesday 19 September or via email to vanessa@spectator.co.uk or by fax on 020 7242 0603. The winner will be the first cor- rect answer drawn out of a hat, and each week I shall be offering a prize of a bottle of Ardbeg Malt Whisky.