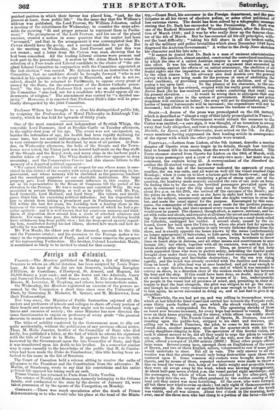 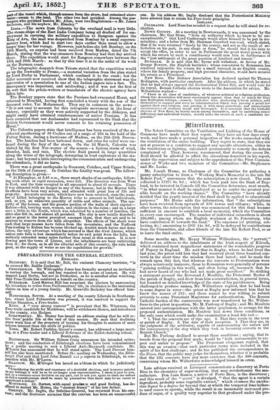 FRANCE.—The Ifoniteur published on Monday a list of thirty-nine Senators to whom an official dotation has been assigned by Louis Napo- leon. At the head of the list are ten Generals, including Baraguay d'Hilliers, de Castellane, d'Hautpoul, St. Arnaud, and Magnan, for 30,000 franca a year each ; and at the lower end two Admirals, Casey and Parseval-Deschenes, 15,000 francs each. M. Elie de Beaumont, M. Bineau, M. Leverrier, M. Troplong, and others, have intermediate sums.

On Wednesday, the Moniteur registered an exercise of the powers as- sumed by the Usurpation a short time since over the University of Paris, by dismissing M. Michelet, M. Quinet, and M. Mickiewicz, from their Professorships.

Not long since, the Minister of Public Instruction enjoined all the rectors and professors of schools and colleges to shave off every portion of their beards and moustaches, that they might not be confused with agi- tators and enemies of society ; the same Minister has now directed the same functionaries to enjoin on professors of every grade "the greatest elecorum in manor and decency in dress."

The titles of nobility conferred by the Government seem to slip out quite accidentally, without the publication of any previous official notice. Thus, M. Helie Janvier, brother of the Councillor of State who died lately, has published a letter, at the foot of which he adorns his signature with the title of Count de la Motte. It appears that this was the title bestowed by the Government upon the late Councillor of State, and that it was transferred upon his death to his brother. In a somewhat similar way it came casually to the knowledge of the public that M. de Camba- ceres had been made the Duke de Cambaceres ; this title having been at- tached to his name in the list of Senators.

The Court of Cessation held a solemn sitting to receive the oaths of allegiance to the President and the Constitution from the advocates : M. Martin, of Strasbourg, wrote to say that his convictions and his entire political life opposed his taking such an oath. Prince Canino has returned to Paris from Civita Vecchia.

The estates of Neuilly and Monceaux, formerly belonging to the Orleans family, and confiscated to the state by the decree of January 22, were taken possession of by the agents of the Usurpation, on Monday. Gailmasse.—There was much speculation after the death of Prince Schwarzenberg as to who 'would take his place at the head of the Minis- try,—Count Bnol, his successor in the Foreign department, and the par- ticipator is all his views of absolute policy, or some other politician of less extreme views. The doubt has been solved by a telegraphic message stating that Dr. Bach has succeeded to the Premiership. Dr. Bach was one of the Radical Ministers of the Wesenberg Cabinet, after the Revolu- tion of March 1848; and it was he who really drew up the famous char. ter of the 41.1. of March. But he has recanted all his old principles, with. out the least difficulty; "taking his full share in all the broken oaths, in all the military and police brutalities which since December 1848 have disgraced the Austrian Government" A writer in the Daily News aketehea his character and his late acts—

"It cannot be denied that Dr. Bach is a man of eminent administrative ability. His intellect, almost unaided, constructed the centralized machinery by which the idea of a united Austrian empire is now sought to be carried into effect. It was his wisdom and force of argument that succeeded in maintaining, against the efforts of an united aristocracy, the abolition of an feudal rights and the imposition on the aristocracy of all the burdens borne by the other classes. To his advocacy also does Austria owe the general survey which is now being made for the purpose at onoe of abolishing the robot (serfdom), of providing compensation for its abolition, and of im-

posing a tax upon land To the pliancy of his character, to the un- failing servility he has evinced, coupled with his really great abilities, does Baron Bach (for he has received several orders conferring that rank) owe his present elevation.. . . . It would be wrong then to anticipate that any change will take place in the system of government. Military and police despotism will continue as before; the army will not be diminished, and the hordes of hungry bureaucrats will be iacreased; the expenditure will not be decreased; but efforts will be made to increase the burdens of taxation."

SPAIN.—A decree of the press was promulgated on the 5th instant, which is described as "almost a copy of that lately promulgated in France," The usual clause that the Government would submit the measure to the Cortes was omitted,—a sure sign, it was thought, of an intention to sweep away that body altogether, and rear a despotism. El Clamor, La Nacion, El Herald°, La Epoca, and El Observadar, were seized on the 7th. La Esp. ranza mentions having suppressed its first leading article in consequence of the rigour with which the other journals were treated.

INDI1.—The news from Calcutta by the overland mail is very little. The steam-ships of the East India Company being all drafted off for em- ployment in carrying the military expedition to Rangoon against the Xing of Ave, the mail was despatched from Bombay by a small supernu- merary boat, which had to start two days earlier than usual to allow a longer time for her voyage. However, just before she left Bombay, on the 15th March, an express had been received from Madras, dated the 7th march, stating that the war-steamers from Bombay had that day arrived there. The expedition would start for Rangoon somewhere between the 1.5th and 20th March so that by this time it is in the midst of its work en the Burman coast.

The telegraphic despatch from Trieste stated that the expedition would go up the Irawaddy to Prome,—a material variation from the plan stated by Lord Derby in Parliament, which confined it to the coast; but the fuller accounts now received show that the telegraphic statement was the conversion of a speculation in one of the Indian papers into a fact. The discrepancy was important, and misleading ; and it was not the first of its sort that the precis-writers or translators of the electric agency have fallen into.

The Bombay papers state that the Persians had evacuated Herat, and returned to Meschid, having first concluded a treaty with the son of the deceased ruler, Yar Mohammed. They nay in comment on the news- '' It is not easy to account for this retrograde movement in the hour of victory, especially as they were actively supported by the Alikzyea, and might easily have obtained reinforcements of native Persians. It has been surmised that our Ambassador had represented to the Shah that the British Government would never consent to his retaining possession of Herat," The Calcutta papers state that intelligence has been received of the ac- cidental smothering of 50 Coolies out of a cargo of 234 in the hold of the Futtay Salem, during a hurricane off Madras, on the 22d-25th Decem- ber. The hatches had been battened down, and cries for relief were un- heard during the fury of the storm. On the 2d March, Calcutta was visited by the first Nor-wester of the season—a furious storm of wind, thunder, hail, and rain. The electric fluid passed in large quantities along the wires of the telegraph, detonating in loud explosions at the sta-

tions; beyond a little interrupting the communication and endangering the attendants, it did no harm.

There was a great earthquake in Goozerat, Cutchee, and Upper Seinde, on the 24th of Jannary. In Cutchee the fatality was great. The follow- ing description is given-

" At Xhanghur, at 3.45 a.m., three smart shocks of an earthquake, follow- ing each other in rapid succession, were felt. The direction was from West to East, and the time occupied in all amounted to about 45 seconds. There it was attended with no danger to any of the houses; but in the Murree hills its effects have been very severe, and attended with great loss of life and property. Accurate accounts, which have now been received, state the num- ber of killed belonging to the Murree tribe to amount to 340 individuals, and, as yet, an unknown quantity of cattle and other animals. The ma- jority of the houses, and the greater portion of the walls of their capital- Kahun—fell, burying men, women, and children in the ruins ; and in a large cave a little to the North, which was inhabited by a number of families, the sides also fell in, and almost all perished. The city is now totally deserted ; and so great is the terror prevalent amongst them, that they are said to be anxious to remove from the hills altogether. The effects of the shock were such that large masses have fallen from the mountains, and the Nuffoosk Pass leading to Kahun has become blocked up. Amidst much havoc and deso- lation, the only advantage which has accrued is that the river Lheree, which unless rain falls is lost immediately before its exit point from the hills, has suddenly extended many miles further than usual at this season. It is now flowing past the town of Lheree, and the inhabitants are busy cultivating from it ; for there, as in all the alluvial soils of this country, the rule holds good, as the supply of water so are the capabilities for growth."