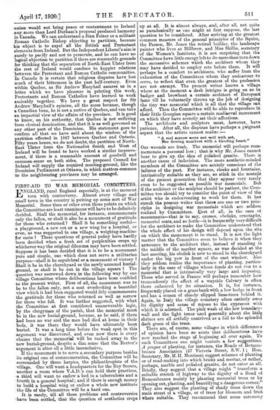 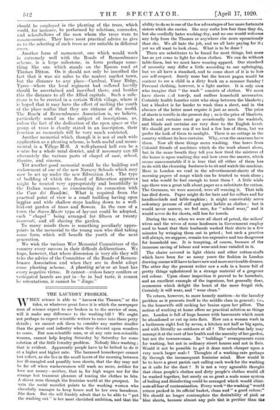 ENGLAND, rural England especially, is at the moment torn with controversy. Almost every village and small town in the country is putting up some sort of War Memorial. Some time or other even those points on which the Committee are least unanimous will have to be definitely decided. Shall the memorial, for instance, commemorate only the fallen, or shall it also be a monument of gratitude for those who returned I Shall it be something useful— a playground, a new cot or a new wing for a hospital, or even, as was suggested in one village, -a weighing-machine for carts ? These questions of general policy have hardly been decided when a fresh set of perplexities crops up whichever way the original dilemma may have been settled. Suppose it has been decided that it is to be a monument pure and simple, one which does not serve a utilitarian purpose—shall it be sepulchral or a monument of victory ? Shall it be in the churchyard or the newlyannexed burial- ground, or shall it -be out in the village square ? The question was narrowed down in the following way by one village Committee whose deliberations have been confided to the present writer. First -of .all, the monument was to be to the fallen only, not a seat overlooking a beautiful view which it had been suggested would fitly commemorate the gratitude _for. those who returned as well as sorrow for those who fell. It was further suggested, with what the Committee at first considered unanswerable logic, by .the clergyman of the parish, that the memorial must be in the new burial-ground, because, as he said, if there had been no war and the men had died at home in their beds, . it was there .they would have ultimately been buried. It was a long time before the weak spot in this argument was discovered, and. even now there, is every chance that the .memorial will be tucked away in the new burial-ground, despite a dim sense that the Rector's argument is after all a little inconclusive.

If the monument is to serve a secondary purpose besides its original one of commemoration, the Committee will be surrounded by those harpies, the philanthropists of the village. One will want a headquarters for the Boy Scouts, -another a room where Val.D.'s can hold their practices, -a third will want to endow a bed in a tuberculosis and a fourth in a general hospital; and if there is enough money to build a hospital wing or endow a whole new institute the life of the Committee will 'be a hard one.

It is rarely, till all these problems and controversies have been settled, that the question of aesthetics crops up at. all. It is almost always, .and, after all, not quite as paradoxically as one might at first suppose, the last question to be considered. After arriving .at the greatest common measure of the general principles of the Squire, the Parson, Mr. Jones the retired builder, the landscape painter who lives at Hillbrow, and Miss Skillie, secretary of the Women's Institute, it is not surprising that the Committee -have little energy left to do'more than turn down the successive schemes which the architect whom they may have decided to employ sets before them. It will perhaps be a comfort to architects, who. suffer from the exhaustion of the Committees whom they endeavour 'to serve, to reflect that even the greatest of the profession are not exempt. The present writer knows a village where st the moment a _dark intrigue is going on so to badger and browbeat a • certain architect of European fame till he voluntarily throws up the job of designing the tiny war memorial which is Pall that the village can afford. Then the Committee will 'be able to reproduce in their -little Georgian square &certain mediaeval monument on which they have secretly set their affections.

The architects .and sculptors must, however, have patience. After all, the disputes have perhaps a. poignant aspect that the artists cannot realize :—

A real 801TONV aorta not well with art, Nor flowing numbers with a bleeding heart."

Our wounds are fresh. The memorial will perhaps cons.. memorate personal loss ' • that is why Mr. Jones cannot bear to give up the idea of polished, granite. There is another cause of indecision. The more aesthetic-minded members of the Committee -are acutely conscious of the failures of the- past. For -instance, clocks and fountains, intrinsically suitable as they -are, so stink in the nostrila of the present generation that they appear very rarely even to be suggested as possible war memorials. But if the architect or the sculptor should be patient, the Com- mittee too should try to consider the point of view of the artist who is endeavouring to work for them. -It has struck the present writer that there are one or two prin- ciples in designing war 'memorials which are seldom realized by Committees. First of all, in the case of monuments—that is to say, crosses, obelisks, cenotaphs,' memorial seats, and so forth—it is frequently verydifficUlt for .the architect to make the Committee understand that the whole effect of his design will depend upon the site on which the monument •is to -stand. It is not the light matter that the Committee seem to believe it when they announce to the architect -that, instead of standing in the middle of the market square, as was decided at the last meeting, his obelisk is now-to stand in the churchyard under the 'big -yew in front of the east window. Also they seldom realize the importance of 'planting, particu- larly in the case of villages whose funds do not run to a memorial that is intrinsically very large and imposing. Those who served in France will- perhaps remember how tremendously the effect of a wayside Calvary is often there enhanced by its situation. It is, for instance, frequently placed on a grass bank with a low hedge in front and has a screen of closely clipped lime-trees behind it. Again, in Italy the village cemetery .often 'entirely owes its dignity and -sense of repose to the cypresses with which it is adorned. The pink wash of the low boundary- wall and the light tones used generally about the little shrines are all artfully contrived, as a foil to the splendid dark green of the trees. There are, of course, some villages in which differenocs of opinion have been so acute that deliberations have now reached the stage of beginning all over again. To such Committees one might venture a few suggestions. A propos of planting, for instance, the Roads -of Remem- brance Association (47 Victoria Street, S.W. 1 ; Hon.

Secretary, Mr. M. H. Morrison) suggest schemes of planting or of road-making into which bricks and mortar, or rather, perhaps, marble and polished granite, do not enter at all. Briefly, they suggest that a village might " transform a suitable stretch of highway to the dignity of a Road of Remembrance mainly by planting memorial trees or by opening out, planting, and beautifying a dangerous corner." They also suggest the planting of shady trees down the main street of a village, or of trees for blossom and fruit where suitable. They recommend that some ceremony should be employed in the planting of the trees, which could, for instance, be performed by relations, comrades, and schoolfellows of the men whom the trees were to commemorate. They have most practical advice to give as to the selecting of such trees as are suitable in difierent f: rep, s Another form of monument, one which would work in extremely well with the Roads of Remembrance scheme, is a large milestone, in form perhaps some- thing like one which stands on the Epsom road at Thames Ditton. On it should not only be inscribed the fact that it was six miles to the nearest market town, but the distance to any place—Cambrai, Vimy Ridge, Ypres—where the local regiment had suffered heavily should be ascertained and inscribed there, and besides this the distance to all the Allied capitals. Such a mile- stone is to be erected in a certain Welsh village, where it is hoped that it may have the effect of making the youth of the place realize that they are citizens of the world. The Roads of Remembrance Association is, we believe, particularly sound on the subject of inscriptions, as, unless the fact of the dedication of the open space or the group of trees is clearly stated in an inscription, their function as memorials will be very much restricted. Another memorial which, though it is not of such wide application as a planting scheme, is both useful and monu- mental, is a Village F1,111. A well-planned hall can be a c .ntre for a whole rural district, and if necessary can fill alternately the various parts of chapel of ease, school, theatre, and cinema.

Yet another good memorial would be the building and endowment of one of the new Nursery Schools which may now be set up under the new Education Act. The type of building of which the Board of Education approves might be treated very appropriately and beautifully in the Italian manner, so announcing its connexion with the Case dei Bambini. What is required from the practical point of view is a small building having open loggias and wide shallow steps leading down to a well- laid-out garden of trees and flowers. In the case of a town the Sacro-Monte type of lay-out could be adopted, each " chapel " being arranged for fifteen or twenty innocents, and all sharing the garden.

To many minds there is something peculiarly appro- priate in the memorial to the young men who died taking some form which will benefit the youth of the next generation.

We wish the various War Memorial Committees of the country every success in their difficult deliberations. We hope, however, that where dissension is very rife they will take the advice of the Committee of the Roads of Remem- brance Association and when they are in doubt adopt some planting scheme. A planting ache ne at least has every negative virtue. It cannot—unless fancy conifers or variegated laurels are put in—be in bad taste, it cannot be ostentatious, it cannot be " Jingo."