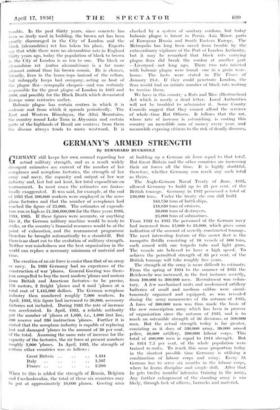 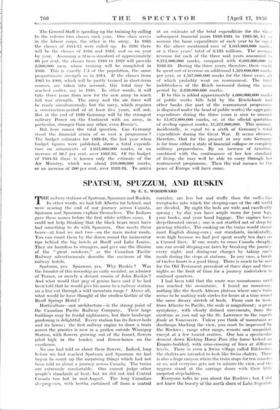 GERMANY still keeps her own counsel regarding her actual military strength, and as a result widely divergent estimates are current of the number of her aeroplanes and aeroplane factories, the strength of her army and navy, the capacity and output of her war industry and, last but not least, her total expenditure on rearmament. In most cases the estimates are fantas- tically exaggerated. It was said, for example, at the end of 1935 that 200,000 workers were employed in the aero- plane factories and that the number of aeroplanes had reached the figure of 25,000. The estimates of expendi- ture run as high as 11,500,000,000 for the three years 1933, 1934, 1935. If these figures were accurate, or anything like it, the German military machine would be ready to strike, or the country's financial resources would be at the point of exhaustion, and the rearmament programme therefore be brought automatically .to a standstill. But there is no short cut to the evolution of military strength. Neither war-mindedness nor the best organisation in the world can replace a necessary minimum of material and time.

The creation of an air force is easier than that of an army or navy. In 1933 Germany had no experience of the construction of war 'planes. General Goering was there- fore compelled to buy the most modern 'planes and motors from British and American factories—to be precise, 176 motors, 2 freight 'planes and 6 mail 'planes at a total cost of 1,445,000 dollars. The German aeroplane industry then numbered roughly 7,000 workers. In April, 1935, this figure had increased to 20,000, accessory factories not included. During 1935 the rate of increase was accelerated. In April, 1935, a reliable authority put the number of 'planes at 1,630, i.e., 1,000 first line, 300 reserve and 330 instruction 'planes. Further it is stated that the aeroplane industry is capable of replacing lost and damaged 'planes to the amount of 50 per cent. of the total. Assuming the same rate of increase for the capacity of the factories, the air force at present numbers roughly 2,000 'planes. In April, 1935, the strength of certain other countries was as follows : Great Britain 1,43t Italy .. 1,507 France .. 2,286

When to this is added the strength of Russia, Belgium and Czechoslovakia, the total of these six countries may be put at approximately 10,000 planes. Goering aims

at building up a German air force equal to that total. But Great Britain and the other countries are increasing their air forces all the time. It is highly doubtful, therefore, whether Germany can reach any such total as theirs.

From 1932 to 1935 the personnel of the German navy had increased from 15,000 to 34,000, which gives sonic indication of the amount of secretly constructed tonnage. The most interesting feature of this secret fleet is the mosquito flotilla consisting of 10 vessels of 600 tons, each armed with one torpedo tube and light guns. The vessels are believed to have a high speed. To achieve the permitted strength of 35 per cent. of the British tonnage will take roughly five years.

The strength of the army is more difficult to estimate. From the spring of 1934 to the summer of 1935 the Reichswchr was increased, in the first instance secretly, from 100,000 to 300,000 men. Recruitment was volun- tary. A few mechanised units and modernised artillery batteries of small and medium calibre were simul- taneously organised and equipped, as was revealed during the army manoeuvres of the autumn of 1935. A force of 300,000 men was thus made the basis of the new conscription army which has been in process of organisation since the autumn of 1935, and is to reach an ostensible strength of 36 divisions, or 560,000 men. But the actual strength today is far greater, consisting as it does of 530,000 army, 30,000 armed police, 40,000 artillery, 200,000 labour corps. This total of 800,000 men is equal to 1914 strength. But in 1914 7.5 per cent. of the whole population were trained ren.uits. To reach this same proportion today in the shortest possible time Germany is utilising a combination of labour corps and army. Every fit German has to serve six months in the labour corps, where lie learns discipline and simple drill. After that he gets twelve months' intensive training in the army. Any further enlargement of the standing army is tins likely, through lack of officers, barracks and material. ' The General Staff is speeding up the training by calling to the colours two classes each year. One class serves in the labour corps, the other in the army. In 1935 the classes of 1914-15 were called up. In 1936 there will be the classes of 1916 and 1913, and so on year by year. Assuming a fitness-standard of approximately 80 per cent. the classes from 1910 to 1919 will provide 5,000,000 men, whose training will be completed in 1940. This is exactly 7.5 of the population, the same proportionate strength as in 1914. If the classes from 1905 to 1909, which will be partly trained in short-term courses, arc taken into account, this total may be reached earlier, say in 1939. In other words, it will -take three years from now for the new army to reach full war strength. The army and the air force will he ready simultaneously, but the navy, which requires a construction-period of at least five years, will not. 13iit at the end of 1939 Germany will be the- strongest military Power on the Continent with an army, in particular, stronger than any other, even Russia's. • • But here comes the vital question. Can Germany stand the financial strain of so vast a programme ? The budget estimates for 1933-34, the last year when budget figures were published, show a total expendi- ture on armaments of 1,045,000,000 marks, or an increase of 30.7 per cent. over 1932-3:3. Of the budget of 1934-35 there is known only the estimate of the Air Ministry, which was about 210,000,000 marks, or an increase of 200 per cent. over 1933-34. To arrive at an estimate Of the total exPenditrire for the three subsequent financial years 1933-1934 to' 1935-36; let IN assume the basic expenditure of each year to be equ:d to the above mentioned sum of 1,045,000,000 mark., or a three years' total of 3,135 millions. The average' revenue for each of the three said years amounted to 8,212,000,000 marks, compared with 6,683,000,000 in 1932-33. During the three years, therefore, there could be spent out of revenue an additional 1,529,000,000 marks per year, or 4,587,000,000 marks for the three years. all of which probably went on rearmament. The total indebtedness of the Reich increased during the Same period by 3,350,000,000 marks.

- If to this- is added approximately 4,000,000,000 'marks of public works bills held by the Reichsbank and other banks (for part of the rearmament programme is disguised under the head of-public works) the aggregate expenditure during the three years is seen to amount to 15,072,000,000 marks, or, at the official 'quotation of sterling against marks, £1,222,000,000. This amount, incidentally, is equal to a sixth of Germany's -total expenditure during the Great War. It seems obvious, therefore, that for the present at any rate' Germany is far from either a state of financial collapse or complete military preparedness. By an increase of taxation, combined with the continuance of her low standard of living, she may well be able to carry through her rearmament -programme. Then the real menace to the peace of Europe will have- come.