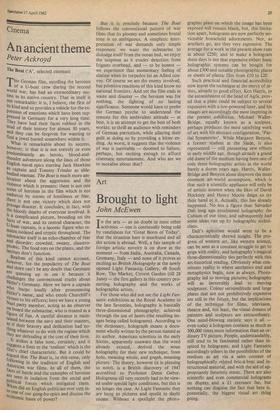 Ithe arts — as no doubt in most other 'activities — one is continually being told by candidates for 'Great Bores of Today', that the situation here is moribund and all the action is abroad. Well, a fair sample of foreign artistic novelty is on show at the moment — from India, Australia, Canada, Germany, Italy — and none of it proves as exciting as British Holography at the newly opened Light Fantastic Gallery, 48 South Row, The Market, Covent Garden (till 28 June) — the first gallery in this country pro- moting holography and the works of holographic artists.

For those who did not see the Light Fan- tastic exhibitions at the Royal Academy in the late Seventies, holography is basically three-dimensional photography, achieved through the use of lasers (the resulting im- ages being called holograms). According to the dictionary, holograph means a docu- ment wholly written by the person named as its author. American scientists in the early Sixties, apparently unaware that the word already existed, derived the noun holography for their new technique, from hold, meaning whole, and graph, meaning picture. The theory, however (it is pleasing to note), is a British discovery of 1947 accredited to Professor Denis Gabor. Holograms till very recently had to be view- ed under special light conditions, but this is no longer the case. At Light Fantastic they are hung as pictures and spotlit in daylit rooms. Without a spotlight the photo-

graphic plate on which the image has been exposed will remain blank, but, this limita- tion apart, holograms are now perfectly ser- viceable household adornments. Nor, as artefacts go, are they very expensive. The average for a work in the present show runs at about £250; and to make a hologram these days is not that expensive either: basic holographic systems can be bought for about £300 and suitable photographic plates or sheets of plastic film from £10 to £20.

Such practical and financial accessibility now leaves the technique at the mercy of ar- tists, already to good effect. Ken Harris, to the astonishment of the head of Agfa, prov- ed that a plate could be subject to several exposures with a low-powered laser, and his images are accordingly the most inspiring in the present exhibition. Michael Waller- Bridge, equally known as a sculptor, perhaps produces the most satisfying work of art with his abstract configuration, 'Par- tial Symmetries'. While Margaret Benyon, a former student at the Slade, is also represented — still pioneering new effects in early middle age, though already a grand old dameof the medium having been one of only three holographic artists in the world barely a dozen years ago. Harris, Wailer- Bridge and Benyon alone disprove the most common art-world assumption, which is that such a scientific appliance will only be of artistic interest when the likes of David Hockney and Henry Moore deign , to try their hand at it. Actually, this has already happened. No less a figure than Salvador Dali long ago proclaimed holography the Cubism of our time, and subsequently had some ideas run up by holographic techni- cians.

Dali's aphorism would seem to be a characteristically shrewd insight. The pro- gress of western art, like western science, can be seen as a constant struggle to get to grips with reality, and holography's magical three-dimensionality ties perfectly with this art-historical reading. Obviously what con- stitutes reality is where aesthetics end and metaphysics begin, now as always. Photo- graphy led to moving pictures; holography will as inexorably lead to moving sculptures. Colour verisimilitude and large plates that are not prohibitively expensive are still in the future, but the implications of the technique for films, television, theatre and, not least, the visual dreams of painters and sculptors are extraordinary. One mind-blowing statistic says it all even today a hologram contains as much as 300,000 times more information than an or- dinary TV picture. People, understandably, still tend to be fascinated rather than in- spired by holograms, and Light Fantastic accordingly ushers in the possibilities of the medium as art via a sales counter of holographically related brie-A-brae and in- structional material, and with the aid of ap- propriately futuristic music. There are also scientific and even commercial holograms on display, and a £1 entrance fee, but nothing can disguise the fact that here is, potentially, the biggest visual art thing going.