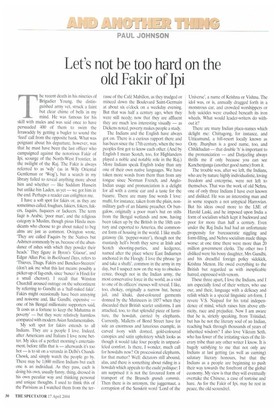 Let's not be too hard on the old Fakir of Ipi

The recent death in his nineties of Brigadier Young, the distinguished army vet, struck a faint but clear chime of bells in my mind. He was famous for his skill with mules and was said once to have persuaded 400 of them to swim the Irrawaddy by getting a bugler to sound the 'feed' call from the opposite bank. What was poignant about his departure, however, was that he must have been the last officer who campaigned against the notorious Fakir of Ipi, scourge of the North-West Frontier, in the twilight of the Raj. The Fakir is always referred to as 'wily' (as in Wily Oriental Gentleman or 'Wog), but a search in my library failed to reveal anything more about him and whether — like Saddam Hussein but unlike bin Laden, as yet — we got him in the end. Perhaps a reader can enlighten me.

I have a soft spot for fakirs or, as they are sometimes called, foughars, fakiers, fokers, fukers, faquirs, fuqueers or fackeers. The term faqir is Arabic, 'poor man'. and the religious category is Muslim, though pious Hindu mendicants who choose to go about naked to beg alms are just as common. Ovington wrote. 'They are called Faquirs by the Natives but Ashrnen commonly by us, because of the abundance of ashes with which they powder their heads.' They figure in Byron's 'Giaour', and Edgar Allan Poe, in Buckboard Days, refers to 'Thieves, Thugs, Fakirs and Bunckco-Steerers' (don't ask me what this last means: possibly a picker-up of fag-ends, since 'bunco' is Hindi for a small cheroot). I recall that Winston Churchill aroused outrage on the subcontinent by referring to Gandhi as a 'half-naked fakir'. Fakirs might occasionally have been annoying and noisome and. like Gandhi, expensive — one of his Bengal millionaire supporters said, 'It costs us a fortune to keep the Mahatma in poverty' — but they were relatively harmless compared with modern Asian fundamentalists.

My soft spot for fakirs extends to all Indians. They are a people I love. Indeed, after Americans and Italians I love none better. My idea of a perfect morning's entertainment, before tiffm that is — afterwards it's too hot — is to sit on a veranda in Delhi's ChandiChowk, and simply watch the people go by. There may be 1.000 million Indians but each one is an individual. As they pass, each is doing his own, usually funny, thing, dressed in his own peculiar way and thinking personal and unique thoughts. I used to think this of the Parisians as I watched them from the ter

rasse of the Cafe Mabillon, as they trudged or minced down the Boulevard Saint-Germain at about six o'clock on a weekday evening. But that was half a century ago, when they were still needy; now that they are affluent they are much less interesting visually — as Dickens noted, poverty makes people a study.

The Indians and the English have always got on. There is a curious rapport there and has been since the 17th century, when the two peoples first got to know each other. (And by English I mean Scotch, too, for Highlanders played a noble and notable role in the Raj.) More Indians speak English today than any one of their own native languages. We have taken more words from them than from any tongue since Norman French, and AngloIndian usage and pronunciation is a delight for all with a comic ear and a taste for the bizarre. There are many fine words I love: mufti, for instance, taken from the plain, nonmilitary garb of an Islamic preacher. Or bungalow, originally a poor man's hut on stilts from the Bengal wetlands and now, having been taken up by the British in the 18th century and exported to America, the commonest form of housing in the world. I like mulligatawny (lit. 'pepper-water), though not the mustardy hell's broth they serve at Irish and Scotch shooting-parties, and kedgeree, named after the place where East Indiamen anchored in the Hoogly. I love the phrase 'go and take a shufti', common in the army in my day, but I suspect now on the way to obsolescence, though not in the Indian army, the most conservative force in the world, as a visit to one of its officers' messes will reveal. I like, too, chokey, originally a narrow hut, hence jail, and khaki, dust-coloured garments donned by the Mutineers in 1857 when they discarded their British scarlet uniforms. I am attached, too, to that splendid piece of furniture, the howdah, carried by elephants. Currently, Malletts of Bond Street have for sale an enormous and luxurious example, in carved ivory with domed, gold-coloured canopies and satin upholstery which looks as though it would take four people in unparalleled comfort. Is there, I wonder, much call for howdahs now? Or processional elephants, for that matter? Well: dictators still abound, alas, and there is something about riding in a howdah which appeals to the exalte politique: I am surprised it is not the favoured form of transport of the Brussels grands commis. Then there is its antonym, the juggernaut, a corruption of the Sanskrit word 'Lord of the

Universe', a name of Krishna or Vishnu, The idol was, or is, annually dragged forth in a monstrous car, and crowded worshippers or holy suicides were crushed beneath its iron wheels. What would leader-writers do without it?

There are many Indian place-names which delight me: Chittagong, for instance. and Utticamund, a hill-resort locally known as °city. Jhunjhun is a good name, too, and Chhildiadan — that double 'If is important to the pronunciation — and Darjeeling always thrills me if only because you can see Kanchenjunga (another good name) from it.

The trouble was, after we left, the Indians, who are by nature highly individualistic, loving freedom and enterprise, were not left to themselves. That was the work of old Nehru, one of only three Indians I have ever known and disliked. He was an interesting man and in some respects a not untypical Harrovian. But his ideas owed more to the LSE of Harold Laski, and he imposed upon India a form of socialism which kept it backward and poor for more than half a century. Even under the Raj India had had an unfortunate propensity for bureaucratic niggling and form-filling, and Nehru socialism made things worse: at one time there were more than 20 million government clerks. The other two I disliked were his bossy daughter, Mrs Gandhi, and his dreadful foreign policy sidekick, Krishna Menon. He owed everything to the British but regarded us with inexplicable hatred, expressed with venom.

These three apart, I love the Indians, and I am especially fond of their writers, who use our, and their, language with a delicacy and relish which is a special linguistic art-form. I revere V.S. Naipaul for his total independence of mind, which raises him above ethnicity, race and prejudice. Now I am aware that he is, strictly speaking, from Trinidad; but has he not the literary soul of an Indian, reaching back through thousands of years of inherited wisdom? I also love Vikram Seth, who has fewer of the irritating vices of the literary tribe than any other writer I know. It is hugely satisfying to me that not only are Indians at last getting (as well as earning) salutary literary honours. but that the Indians as a people are beginning to push their way towards the forefront of the global economy. My view is that they will eventually overtake the Chinese, a case of tortoise and hare. As for the Fakir of Ipi, may he rest in peace, the old scoundrel.