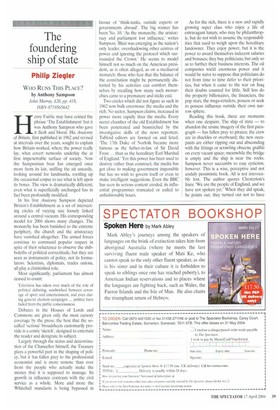 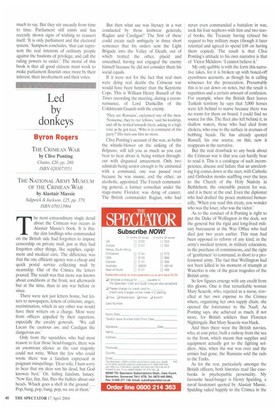 The foundering ship of state

WHO RUNS THIS PLACE? by Anthony Sampson John Murray, £20, pp. 418, ISBN 0719565642 Henry Fairlie may have coined the phrase 'The Establishment' but it was Anthony Sampson who gave it flesh and blood. His Anatomy of Britain. first published in 1962 and revised at intervals over the years, sought to explain how Britain worked, where the power really lay, what covert networks underlay the at first impenetrable surface of society. Now the Sampsonian bear has emerged once more from its lair, sniffing the air uneasily, looking around for landmarks, rootling up the occasional corpse to see what is left upon its bones, The view is dramatically different; even what is superficially unchanged has in fact been profoundly modified.

In his first Anatomy Sampson depicted Britain's Establishment as a set of intersecting circles of varying size loosely linked around a central vacuum. His corresponding model for 2004 shows many changes. The monarchy has been banished to the extreme periphery, the church and the aristocracy have vanished altogether. The armed forces continue to command popular respect in spite of their reluctance to observe the shibboleths of political correctitucie, but they are seen as instruments of policy, not its formulators. Scientists, diplomats, trades unions, all play a diminished role.

Most significantly, parliament has almost ceased to count:

Television has taken over much of the role of political debating, sandwiched between coverage of sport and entertainment; and even during general election campaigns .., politics have

faded from the public consciousness.

Debates in the Houses of Lords and Commons are given only the most cursory coverage by the press; the best that the socalled 'serious' broadsheets customarily provide is a comic 'sketch', designed to entertain the reader and denigrate its subject.

Largely through the status and determination of the Chancellor himself, the Treasury plays a powerful part in the shaping of policy, but it has fallen prey to the professional economist and is more remote than ever from the people who actually make the money that it is supposed to manage. Its growth in influence contrasts with the civil service as a whole. More and more the Whitehall mandarin is being bypassed in favour of 'think-tanks, outside experts or governments abroad'. The big winner has been No. 10. 'As the monarchy, the aristocracy and parliament lost influence,' writes Sampson, 'Blair was emerging as the nation's only leader, overshadowing other centres of power and ignoring the protocol which surrounded the Crown.' He seems to model himself not so much on the American president, as is often alleged, as on a mediaeval monarch: those who fear that the balance of the constitution might be permanently distorted by his activities can comfort themselves by recalling how many such monarchies came to a premature and sticky end.

Two circles which did not figure as such in 1962 now bulk enormous: the media and the rich. No sector, Sampson claims, increased in power more rapidly than the media. Every secret chamber of the old Establishment has been penetrated and besmirched by the investigative skills of the news reporters. Tabloid editors are fawned on and feted. 'The 17th Duke of Norfolk became more famous as the father-in-law of Sir David Frost than as the hereditary Earl Marshal of England.' Yet this power has been used to destroy rather than construct; the media has got close to making government impossible but has no wish to govern itself or even to make intelligent suggestions. Even the BBC has seen its serious content eroded, its influential programmes truncated or exiled to unfashionable hours. As for the rich, there is a new and rapidly growing super class who enjoy a life of extravagant luxury, who may be philanthropic, but do not wish to assume the responsibilities that used to weigh upon the hereditary landowner. They enjoy power, but it is the power to award themselves indecent salaries and bonuses; they buy politicians, but only so as to further their business interests. The oil companies wield enormous power and it would be naive to suppose that politicians do not from time to time defer to their priorities, but when it came to the war on Iraq their doubts counted for little. Still less do the property billionaires, the financiers, the pop stars, the mega-retailers, possess or seek to possess influence outside their own narrow sphere.

Reading this book, there are moments when one despairs. The ship of state — to abandon the ursine imagery of the first paragraph — has fallen prey to pirates; the crew are in shackles or overboard; the new occupants are either ripping out and absconding with the fittings or scrawling obscene graffiti on every vacant space; meanwhile the bridge is empty and the ship is near the rocks. Sampson never succumbs to easy cynicism, however. This is a wise, perceptive and not unduly pessimistic book. All is not irrevocably lost. The author quotes Chesterton's lines: 'We are the people of England, and we have not spoken yet.' When they did speak, he points out, they turned out not to have much to say. But they stir uneasily from time to time. Parliament still exists and has recently shown signs of wishing to reassert itself. 'It is only parliament and the electoral system,' Sampson concludes. that can represent the real interests of ordinary people against the bastions of privilege, and call the ruling powers to order.' The moral of this book is that all good citizens must work to make parliament flourish once more by their interest, their involvement and their votes.