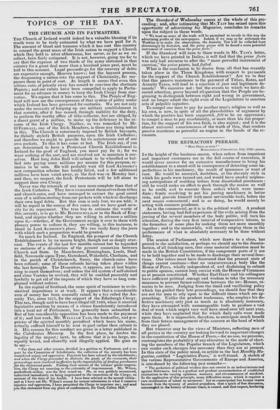 THE CHURCH AND ITS PAYMASTERS.

THE Church of Ireland would indeed be a valuable blessing if its worth were to be truly estimated by what we have paid for it. The amount of blood and treasure which it has cost this country to compel the great mass of the Irish nation to support a Church which they hold in utter abhorrence, has never, as far as we re- collect, been fairly estimated. It is not, however, going too far to say that the expense of two thirds of the army stationed in that country for a great deal more titan a hundred years past, must be laid to this account. Legal proceedings for the recovery of debts are expensive enough, Heaven knows; but the bayonet process, the dragooning a nation into the support of Christianity, far sur- passes them in point of cost. At length it seems that even this ultima ratio of priestly sway has ceased to convince the obstinate Papists ; and our rulers have been compelled to apply to Parlia- ment for an advance in money to keep the Irish Clergy from star- vation. We rejoice that it has come to this. The People of Eng- land will now see the consequences of that system of policy under which Ireland has been governed for centuries. We are not only under the necessity of keeping up our military establishment in that country, after it has ceased, through inability for the duty, to perform the worthy office of tithe-collector, but are obliged, by a direct grant of a million, to make up the deficiency in the in- come of the Irish Clergy. Neither, as was remarked by Mr. O'FERRALL, one of the Irish Members, is there any thing unfair in this. The Church is notoriously imposed by British bayonets, for (falsely styled) British purposes, upon the Irish Catholics ; and therefore we ought to provide for its maintenance out of our own pockets. To this it has come at last. The Irish say, if you are determined to have a Protestant Church Establishment in Ireland for the good of England, you must pay for it ; for we want nothing of the sort, and are resolved not to maintain it our- selves. How long John Bull will submit to be wheedled or bul- lied into paying some millions per annum for this purpose, re- mains to be seen. He will probably wait till Lord ALTHORP'S new composition scheme has totally failed, and a few additional millions have been voted away, as the first was on Monday last ; and then, we suspect, the Irish Protestants will be left alone to support their own Clergy. Never was the triumph of any men more complete than that of the Irish Catholics. They have exonerated themselves from tithes and church-rates, and have managed to extract the good round sum of a million sterling from our pockets with which to discharge their own legal debts. But this sum is only lent, we are told; it will be repaid in the course of five years, and we have good secu- rity for its repayment. The true way to estimate the worth of this security, is to go to Mr. ROTHSCHI Ln, or to the Bank of Eng- land, and inquire whether they are willing to advance a million upon it,—whether, if the Government assign it over to them with plenary power to enforce it, they are willing, in this instance, to stand in Lord ALTHORP'S place. We can easily fancy the jeers with which such a proposition would be greeted.

So much for Ireland. In England, the prospect of the Church Establishment is by no means bright, though not so deeply over- - cast. The events of the last few months cannot but be regarded as ominous of a dissolution of the present connexion between Church and State. In Manchester, Birmingham, Leeds, Shef- field, Newcastle-upon-Tyne, Gateshead, Wakefield, Chatham, and in the parish of Christchurch, Surry, the church-rates have been refused; some of these refusals having taken place within the last fortnight. The Dissenters, it appears, are at last begin- ning to exert themselves; and unless the old system of self-elected and close Vestries be revived, they will be enabled peaceably and lawfully to get rid of the imposts of which they have so long com- plained without redress.

In the capital of Scotland, the same spirit of resistance to eccle-

siastical impositions is at work. It appears that a considerable sum of money has been annually raised, by a tax called the An-

nuity Tax, since 1651, for the support of the Edinburgh Clergy.

This tax, though said to have been illegal till 1809, when it received legislative sanction by means of a clause fraudulently introduced into a local act of Parliament, has generally been submitted to.

But of late considerable opposition has been made to the payment of it; and last week, Mr. WILLIAM TAIT, the bookseller, and pro-

prietor of the spirited monthly periodical which bears his name, actually suffered himself to be sent to gaol rather than submit to it. His reasons for this conduct are given in a letter published in

the Caledonian Mercury. In the first place, he doubts the legality of the impost ; next, he affirms that it is too large, un- equally levied, and absurdly and illegally applied. He goes on to say- " For these and other reasons, detailed in a petition to Parliament, and a re- port by the Committee of Inhabitants, the collection of the annuity has been

considercd unjust and oppressive. Payment has been refused by the inhabitants ; and when the clergy proceeded to distrain the goods of the recusants,_ their proceedings were rendered ineffective by the impossibility offinding purchasers

for the distrained goods. Finding their seizure of the citizens' goods inopera- tive, the Clergy are resorting to the extremity of imprisonment. Mr. Wilson, pocketbook-maker, was the first seized on. He, as was publicly announced, submitted immediately on being imprisoned to the imposition of the Clergy, on account of the state of his health. I have been selected as the second victim and as I have not Mr. Wilson's reason for instant submission to what I conceive injustice and oppression, I have permitted the Clergy to imprison me • and send you this statement from my place of confinement, the Gaol, Calton Hill." IThe Standard of Wednesday sneers at the whole of this pro- ceeding; and, after intimating that Mr.TAIT has seized upon this opportunity of advertising his Magazine, concludes its remarks upon the subject in these words. " We trust no more of the trade will be permitted to invade in this way the advertising profits of the newspapers. Indeed, if we may so far anticipate the Weeklies as to make the observation, the Annuity Tax will be collected least distressingly by distraint, and the peine piano will be found-a more powerful instrument of coercion than the peine forte."

If the Standard will turn to those words in Mr. TAIT'S letter, which we have printed in Italics, it will find that the peine forte was only had recourse to after the " more powerful instrument of coercion," the peine piano, had failed.

What is the conclusion to be drawn from all that has recently taken place in the Three Kingdoms with respect to payments for the support of the Church Establishment ? Are we to feat: that this passive resistance to the payment of Tithes, Rates, and Annuity Taxes, will lead to a rejection of just and legitimate de- mands? We conceive not : but the events to which we have di- rected attention, prove beyond all question that the People are be- ginning to distinguish between right and wrong in government, and no longer admit the right even of the Legislature to sanction acts of palpable injustice.

To compel one man to pay for another man's religion as well as his own, is now, in spite of all the plausibilities of argument by which the practice has been supported, felt to be an oppression; to compel a man to pay exorbitantly, or more than his fair propor- tion, for the support of his own faith, is also unjust; and it is the almost universal consciousness of the truth of this, that renders passive resistance so powerful an engine in the hands of the re- cusants.