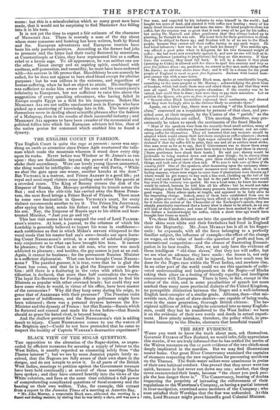 THE ENGLISH COURT IN FASHION.

THE English Court is quite the rage at present : never was any- thing on earth so attractive since Prince Agib overturned the talis- man which made the mountain whereon it stood draw every ship upon its rocks. Never before was Windsor or St. James's so run upon : they are fashionable beyond the power of a BEUMMELL to .shake their ascendancy. Were our lovely young Queen unmarried, the thing would be intelligible : she might say with Portia, " While we shut the gate upon one wooer, another knocks at the door." But VICTORIA is a matron, and Prince ALBERT is a good life ; yet royal and semi-royal visiters come jostling each other like guests at a crowded route. The King of Saxony crosses the disk of the Emperor of Russia, like Mercury performing its transit across the Sun ; and when the ebb-tide has carried away the Saxon Poten- tate, the next flood brings a Prince Royal of Prussia. There must be some rare fascination in Queen VICTORIA'S court, for every visitant recommends another to try it. The Prince DE JOINVILLE, after spying the land, sends his father ; and the King of Prussia his son. Nay, the Emperor of Russia says to his oldest and best- trusted Minister, " Just you go and trY." This last visit seems to have snapped the cord of Lord PALMER.. sroses reserve. At least, a journal, to the columns of which his Lordship is generally believed to impart his woes in confidence— such confidence as that in which Midas's servant whispered to the vocal reeds that his master had ass's ears—breaks out upon learn- ing Count NESSELRODE'S arrival, in a strain of subdued objurga- tory conjecture as to what can have brought him here. It cannot be pleasure ; for the Count is an old man, who never was much addicted to pleasure ; and besides, the gay season is just at an end. Again, it cannot be business ; for the permanent Russian Minister is a sufficient diplomatist. What can have brought Count NESSEL- RODE ? The puzzled guesser, it is true, vows that he is glad the Count has come, and that he is glad the Emperor came before him : still there is a faultering in the voice with which his gra- tification is declared, that more than half contradicts the words. The loyal Ex-Secretary for Foreign Affairs is rejoiced to find his Mistress so popular with other crowned heads ; but could they not have come when he would, in virtue of his office, have been master of the ceremonies ? Why did they keep away during his reign, to grace that of ABERDEEN with their presence ? The Prussian visits are matter of indifference, and the Saxon politeness might have been tolerated ; there was a personal dryness between the Ex- Minister and the dynasty of France ; but that Russia—Russia which he flattered and coaxed and made his ko-tou before—that Russia should so grace his hated rival, is beyond bearing. And the shallow pretext for Count NESSELRODE'S visit is adding insult to injury. Count NESSELRODE comes to use the waters of the Brighton spa !—Could he not have pretended that he came to inspect the locality of Captain WARNER'S destructive experiment ?