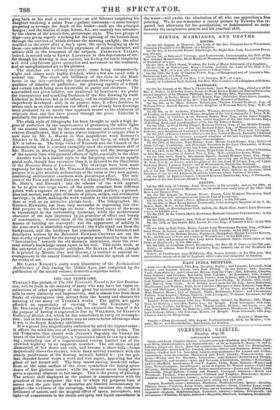 TURNER'S fine picture of The Old Tendraire Towed to her last Destina- tion, will be fresh in the memory of many who may have but vague re- collections of other paintings of this great but eccentric artist ; for it tells its story distinctly and impressively, and is almost free from those freaks of extravagance that detract from the beauty and obscure the meaning of too many of TURNER'S works. The public are again afforded an opportunity of viewing " the Old Temeraire," by Mr. HOGARTH of Portland Street, who has obtained the loan of it for the purpose of having it engraved in line by Wimaiimas, for FINDER'S Gallery of British Art, which he has undertaken to carry on to comple- tion ; and in his rooms the picture may be seen to better advantage than it was in the Royal Academy exhibition. It is a grand idea magnificently embodied by art of the highest order - it affects the mind like one of CAMPBELL'S spirit-stirring lyrics. The old Temeraire,•that shared with NELSON'S flag-ship the Victory the brunt of the battle of Trafalgar, is represented taken in tow by a steam- tug ; reminding one of a superannuated veteran hurried out of the crowded highway by an impatient younker. The old ship-not yet dismantled of her masts and sails, and become a sheer-hulk-looms majestically above the steamer, whose fussy activity contrasts with the stately passiveness of the floating bulwark behind it : yet the gal- lant thunder-bearer wears a worn and wan aspect, appearing but the ghost of her former self. The fiery sunset casting blood-red reflec- tions on the calm surface of the river, symbolizes the fading splen- dours of her glorious career; while the crescent moon rising above gives a spectral dimness to her image. This is the poetry of painting. The artistic skill displayed in the picture is commensurate with the grandeur of the conception : the way in which the gorgeous hues of sunset and the pale tints of moonrise are blended harmoniously to- gether-the vividness of the colouring, which emulates the luminous brilliancy of nature, and the magical effect of space, atmosphere, and light-of evanescence in the clouds and spray and liquid smoothness in the water-will excite the admiration of all who can appreciate a fine painting. We do not remember a recent picture by TURNER that re- quired less allowance for his peculiarities, or demonstrated so satis- factorily his imaginative powers and his practical skill.