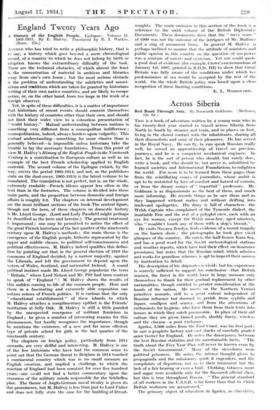 A History of the English People. Epilogue : Volume II. 1905-1915. By E. Halevy. Translated by E. I. Watkin. (Berm. 258.) ANYONE who has tried to write a philosophic history, that is to say, a history which goes beyond a mere chronological record, of a country to which he does not belong by birth or adoption knows the extraordinary difficulty of the task. There are the technical obstacles, of which almost the least is the concentration of material in archives and libraries away from one's own home ; but the most serious obstacle is the problem of understanding the subtleties and associ- ations and traditions which are taken for granted by historians writing of their own native countries, and are likely to escape notice, or, on the other hand, loom too large in the work of a

Yet, in spite of these difficulties, it is a matter of importance that historians of recent events should concern themselves with the history of countries other than their own, and should not limit their wider view to a colourless presentation of "world history." Mutual understanding between nations is something very different from a cosmopolitan indifference ; cosmopolitanism, indeed, always borders upon vulgarity. This mutual understanding—something far more elusive than is generally believed—is impossible unless historians take the trouble to lay the necessary foundations. From this point of view M. Halevy's History of the English People in the Nineteenth Century is a contribution to European culture as well as an example of the best French scholarship applied to English material. The second volume of the Epilogue (which, by the way, covers the period 1905-1914, and not, as the publishers state on the dust-cover, 1905-1915) is the latest volume to be translated. The translation is not perfect, but is, on the whole, extremely readable—French idioms appear less often in the text than in the footnotes. The volume is divided into three main parts, and the proportion between domestic and foreign affairs is roughly 3:2. The chapters on internal development are the most brilliant sections of the book. The central figure, though not the hero, of these chapters on domestic history is Mr. Lloyd George. (Lord and Lady Passfield might perhaps be described as the hero and heroine.) The general treatment i ; impersonal ; one may be permitted to notice the effect of the great French historians of the last quarter of the nineteenth century upon M. Halevy's methods ; the main theme is the emergence of the English people, hitherto represented by the upper and middle classes, to political self-consciousness and political effectiveness. M. Halevy indeed qualifies this defini- tion by pointing out that in the general election of 1910 the commons of England decided, by a narrow majority, against the Liberals, and left the government to depend upon the voters of Wales, Scotland, and nationalist Ireland. A sound political instinct made Mr. Lloyd George popularize the term "Britain," where Lord Nelson and Mr. Pitt had been content to speak of " England " ! M. Halevy shows the results of this sudden coming to life of the common people. Here and there in a fascinating and extremely able exposition one notices echoes of French politics. It is curious that the only "educational establishment" of these • islands to which M. Halevy attaches a complimentary epithet is the Friends' institution at Selly Oak; M. Halevy is still a little puzzled by the unexpected emergence of militant feminism in England ; he gives a number of interesting reasons for this phenomenon, but hardly recognizes the importance, though he mentions the existence, of a new and far more efficient type of private school for girls in the last quarter of the nineteenth* century.

The chapters on foreign policy, particularly from 1911 onwards, are very skilful and interesting. IC Halevy is one of the few historians who have had the common sense to point out that the German threat to Belgium in 1914 touched a continental country which was in no small measure an English creation, and implied a challenge to which the reaction of England had been constant for over five hundred years—one could not find a better commentary upon the crassness of the military minds responsible for the Schlieffen Plan. The theme of Anglo-German naval rivalry is given its due prominence, but M. Halevy is less than just to Lord. Fisher and does not fully state the case for the building of Dread-

noughts. The main omission in this section of the book is a reference to the sixth volume of the British Diplomatic Documents. These documents show that the " navy scare" of 1909 was not the outcome of the intrigues of Mr. Mulliner and a ring of armament firms. In general M. Halevy is perhaps inclined to assume that the attitude of ministers and public opinion in this country on the question of sea-power was a mixture of naivete and cynicism. Yet one could quote a good deal qf evidence (for example, Crowe's memorandum of January 1st, 1907, printed in B.D.D. HI) to show that Great Britain was fully aware of the conditions under which her predominance at sea would be accepted by the rest of the world. On the whole British policy was based upon a clear recognition of these limiting conditions.