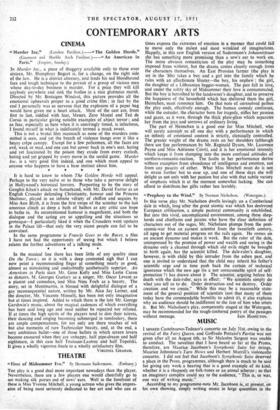 a Murder Inc." (London Pavilion.)-4, The Golden. Horde." (Gaumont and Marble Arch Pavilion.)----A, An American in Paris." (Empire, Sunday.) IN Murder Inc., a piece of thuggery available only to those over

sixteen, Mr. Humphrey Bogart is, for a- change, on the right side of the law. He is a district attorney, and lends his sad bloodhound face and tough technique to the pursuit of a group of vicious men whose day-to-day business is murder. For a price they will kill anybody anywhere and sink the bodies in a nice glutinous marsh. Directed by Mr. Bretaigne Windust, this picture provides all the emotional upheavals proper to a gdod crime film ; in fact by the end I personally was so nervous that the explosion of a paper bag would have given me a heart attack. Most of the cast are, from first to last, riddled with fear, Messrs. Zero Mostel and Ted de Corsia in particular giving notable examples' of abject terror ; and as fear, especially as here when it is unerringly timed, is infectious, I found, myself in what is indelicately termed a muck sweat.

This is not a brutal film inasmuch as none of the murders com- mitted is seen, and yet the breath of violence hangs over it like a heavy crepe canopy. Except for a few policemen, all the faces'are evil, weak or mad, and one can but cower back in one's seat, hating and yet fascinated by the poison they exude from every eyelash, hating and yet gripped by every move in the sordid game. Murder Inc. is a very good film indeed, and one- which must- appeal to anyone who happens to have a base instinct about him.

* It is hard to know to whom The Golden Horde will appeal. Perhaps to the very naive or to those who take -a perverse' delight in Hollywood's historical horrors. Purporting to be the story of Genghis Khan's attack on Samarkand, with Mr. David Farrar as an . English Crusader defending Christianity, honour and the Princess' Shalimar, played in an infinite vliiety of chiffon and sequins by Miss Ann Blyth, it is from the first swipe of the scimitar to the last amorous clinch as deep a bath of bathos as any critic can hope to bathe in. Its unintentioned humour is magnificent, and both the dialogue and the acting are so appalling and the situations so grotesque—I particularly liked it when the Crusaders went upstairs in the Palace lift—that only the very nicest people can fail to be convulsed.

In the same programme is Franeis Goes to the Races, a film I have not had the opportunity of seeing but which I believe relates the further adventures of a talking mule.

On the Town; so it is with a deep contented sigh that I can now point a recommending finger at something nearly as good, almost as stimulating and undoubtedly aesthetically superior. An American in Paris stars Mr. Gene Kelly and Miss Leslie Caron as dancers, M. Georges Guetary as a singer, Mr. Oscar Levant as a pianist and comedian, -and Miss Nina Foch as a beauty. The story, set in Montmartre, is blessed with delightful dialogue of a gay inconsequential nature, written by Mr. Alan Jay Lerner, and the director, Mr. Vincente Minnelli, has been not only imaginative but at times inspired. Added to which there is the late Mr. George Gershwin's music, about the magical cadences of which everything has been said long ago and need neither be repeated nor refuted. If at times the high spirits of the players tend to dim their talents, their dancing and singing becoming submerged in tomfoolery, there are ample compensations, for not only are there touches of wit but also moments of rare Technicolor beauty, and, at the end, a very ambitious ballet—one of those ballets in which screen lovers become ensnared when they are unhappy, half pipe-dream and half nightmare, in this case half Toulouse-Lautrec and half Topolski. It gives a wholly vigorous finale to a wholly .satisfactory film.