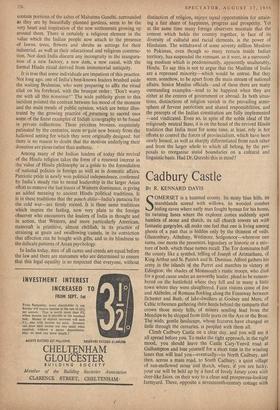 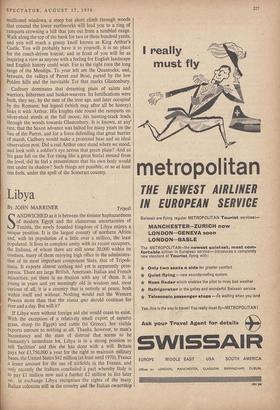 BY R. KENNARD DAVIS SOMERSET is a haunted county. Its misty blue hills, its marshlands scored with willows, its wooded combes hiding caves where early man fought hyenas for his home, its twisting lanes where the explorer comes suddenly upon hamlets of stone and thatch, its tall church towers set with fantastic gargoyles, all make one feel that one is living among ghosts of a past that is hidden only by the thinnest of veils. Glastonbury, Athelney, Wedmore, Sedgemoor—wherever one turns, one meets the presences, legendary or historic or a mix- ture of both, which these names recall. The Tor dominates half the county like a symbol, telling of Joseph of Arimathaea, of King Arthur and St. Patrick and St. Dunstan. Alfred gathers his army in the islands of the Parret and marches to victory at Edington; the shades of Monmouth's rustic troops, who died for a good cause under an unworthy leader, plead to be remem- bered on the battlefield where they fell and in many a little town where they were slaughtered. Faint visions come of Inc and Aldhelm. of Romans flocking along the Fosseway between Ilchester and Bath, of lake-dwellers at Godney and Mere, of Celtic tribesmen gathering their herds behind the ramparts that crown those misty hills, of miners sending lead from the Mendips to be shipped from little ports on the Axe or the Brue. The wide, gentle landscape, whose features have changed so little through the centuries, is peopled with them all..

Climb Cadbury Castle on a clear day, and you will see, it all spread before you. To make the right approach, in the right mood, you should leave the Castle Cary-Yeovil road at Galhampton and lose yourself for a short time in the winding lanes that will lead you—eventually—to North Cadbury, and then, across a main road, to South Cadbury; a quiet village of sun-mellowed stone and thatch, where, if you are lucky, your car will be held up by a herd of lovely Jersey cows with deer-like faces. on their way to a clean and prosperous-looking farmyard. There, opposite a seventeenth-century cottage with mullioned windows, a steep but short climb through woods that conceal the lower earthworks will lead you to a ring of ramparts crowning a hill that juts out from a tumbled range. Walk along the top of the bank for two or three hundred yards, and you will reach a grassy knoll known as King Arthur's Castle. You will probably have it to yourself; it is no place for the coach-driven tourist; and in front of you will lie as Inspiring a view as anyone with a feeling for English landscape and English history could wish. Far to the right runs the long range of the Mendips. To your left are the Quantocks; and, between, the valleys of Parret and Brue, parted by the low Polden hills and the inevitable Tor that marks Glastonbury.

Cadbury dominates that dreaming plain of saints and warriors, fishermen and basket-weavers. Its fortifications were built, they say, by the men of the iron age. and later occupied by the Romans; but legend (which may after all be history) links it with Arthur. His knights ride round the ramparts on silver-shod steeds at the full moon; his hunting-track leads through the woods towards Glastonbury. It is known, at any rate, that the Saxon advance was halted for many years on the line of the Parret, and for a force defending that great barrier of marsh, Cadbury would make a protected base and an ideal observation post. Did a real Arthur once stand where we stood, and look with a soldier's eye across that grFen plain? And as his gaze fell on the Tor rising like a great burial mound from the level, did he feel a presentiment that his own body would rest under its shadow? Such things are possible; or so at least one feels, under the spell of the Somerset country.