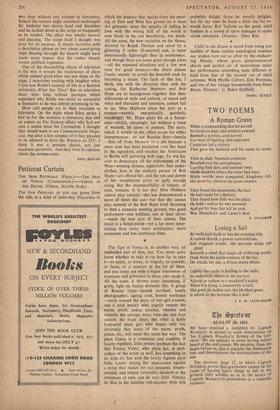 The Iron Petticoat, as you can guess from the title, is a kind of latter-day Ninotchka in which the humour that sparks from the meet- ing of East and West has grown (as it must do) grimmer, since the penalty of falling in love with the wrong half of the world is now likely to be, not heartbreak, but death. All the same, the new variation on the theme, directed by Ralph Thomas and acted by a glittering if rather ill-assorted cast, is more determinedly lightweight than its predecessor, and though there are some good enough jokes —all the expected situations and a few new ones for good measure—the film's almost frantic anxiety to avoid the heartfelt ends by becoming a strain. The fault of this lies, 1 think, less with the direction than with the casting, for Katherine Hepburn and Bob Hope are so incongruous together that their differences of style and outlook, of mood and voice and character and intention, cannot fail to jar. Miss Hepburn plays her part as a woman—warmly, energetically, gauchely, touchingly; Mr. Hope plays his as a funny- man—slickly, amusingly, but without a trace of warmth, let alone of passion. The story, which is simple as pie, offers scope for either interpretation : an ace Russian flyer—female —flies off from Moscow in a pet because a mere man has been promoted over her head in the squadron, and reaches the Americans in Berlin still quivering with rage. To win her over to democracy all the enticements of the West—evening dresses, nightclubs, lace under- clothes, love in the unlikely person of Bob Hope—are offered her, and the ups and downs of her temptations carry us gaily enough along. But the incompatibility of temper, of tone, remains. It is not that Miss Hepburn cannot play comedy—she has demonstrated a score of times she can—but that she cannot play comedy of the Bob Hope kind. Straining to find a common meeting ground, two good performers—one brilliant, one at least clever —waste the best part of their talents. The result is a hotch-potch—yet a lot more enter- taining than many more satisfactory, more consistent and less ambitious films.

The Sign of Venus is, in another way, an undecided sort of film, too, You never quite know whether to take it—or how far to take it—as satire, or irony, or tragedy, or comedy, or farce, or a mixture of the lot of them, and you come out with a vague impression of crossness and grievance in those who made it. All the same, it throws some interesting, if grisly, light on Italian domestic life. A group of Roman types—loutish car-thief, lonely photographer, ageing roué, honest workman —circle around the story of two girl cousins, one a cool beauty who angrily resents the stares, prods, pokes, pinches, whistles and remarks she attracts every time she sets foot outside the front door; the other a hotly frustrated plain girl who hopes only too obviously that some of the stares, prods, pokes, etc., will some day come her way. The plain Cesira is a consistent and credible, if faintly repellent, little person (perhaps the fact that Franca Valeri, who plays her, is part- author of the script as well, has something to do with it); but with the lovely Agnese poor Sofia Loren, pitting her appearance against a script that makes her out innocent, simple- minded, and almost invariably shocked at the attentions of men, can do very little. Vittorio de Sica in his familiar old-charmer style will Child in the House is saved from being just another of those routine sociological treatises our studios turn out so often by the enchant- ing Mandy, whose grave good-mannered charm and perfect air of naturalness make her performance something quite different in kind from that of the normal run of child actresses. With Phyllis Calvert, Eric Portman, and one of her vintage housemaids from Dora Bryan. Director : C. Baker Endfield.