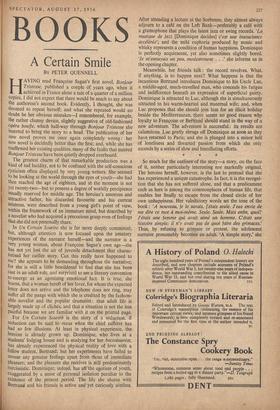 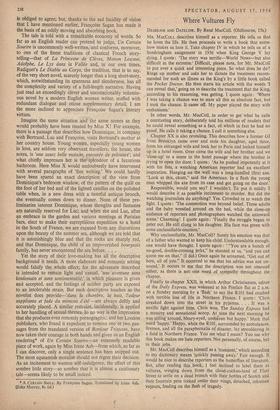 BY PETER QUENNELL I AVING read Frangoisc Sagan's first novel, Bonjour Tristesse, published a couple of years ago, when it achieved in France alone a sale of a quarter of a million copies, I did not expect that there would be much to say about the authoress's second book. Evidently, I thought, she was doomed to repeat herself; and what she repeated would no doubt be her obvious mistakes—I remembered, for example, the rather clumsy device, slightly suggestive of old-fashioned opera boulle, which half-way through Bonjour Tristesse she inserted to bring the story to a head. The publication of her new novel proves me once again completely wrong : her new novel is decidedly better than the first; and, while she has reaffirmed her existing qualities, many of the faults that marred Bonjour Tristesse have been quietly dropped overboard.

The greatest charm of that remarkable production was a kind of sad lucidity, not to be confused with the self-conscious Cynicism often displayed by very young writers. She seemed to be looking at the world through the eyes of youth—she had then reached the age of eighteen, and at the moment is not Yet twenty-two--but to possess a degree of worldly percipience usually reserved for middle age. The heroine's amorous and attractive father, his discarded favourite and his current mistress, were described from a young girl's point of view, within the framework of an immature mind, but described by a novelist who had acquired a precocious grasp even of feelings that she did not personally share.

In Un Certain Sourire she is far more deeply committed; but, although attention is now focused upon the amatory experiences of the narrator herself—and the narrator is a very young woman, about Frangoise Sagan's own age—she has not yet lost the air of juvenile detachment that charac- terised her earlier story. Can this really have happened to me? she appears to be demanding throughout the narrative; for she is still a little bewildered to find that she has been east in an adult role, and surprised to see a literary convention re-emerge as an agonising emotional fact. It is true, she learns, that a woman bereft of her lover, for whom the expected letter does not arrive and the telephone does not ring, may suffer all the pangs with which she is credited by the fashion- able novelist and the popular dramatist : that adult life is largely made up of clichés, and that a situation is not the less Painful because we are familiar with it on the printed page.

For Un Certain Sourire is the story of a seduction, if seduction can be said to occur when the chief sufferer has had so few illusions. At least in physical experience, the heroine is already grown up. Dominique, who lives at a students' lodging house and is studying for her baccalaureat, has already experienced the physical reality of love with a fellow student, Bertrand; but her experiments have failed to arouse any genuine feelings apart from those of immediate Pleasure; and the pleasure she receives is still predominantly narcissistic. Dominique, indeed, has all the egotism of youth, exaggerated by a sense of personal isolation peculiar to the existence of the present period. The life she shares with Bertrand and his friends is active and yet curiously aimless. After attending a lecture at the Sorbonne, they almost always adjourn to a café on the Left Bank—preferably a café with a gramophone that plays the latest jazz or swing records. 'La inusique de jazz [Dominique decides] c'est une insouciance acceleree'; and the mild euphoria produced by music and whisky represents a condition of human happiness. Dominique is perfectly acquiescent, yet also sometimes slightly bored. 'Je m'enttyais un peu, modestement . . .' she informs us in the opening chapter.

Meanwhile, her friends talk : the record revolves. What, if anything, is to happen next'? What happens is that the incautious Bertrand introduces Dominique to his Uncle Luc. a middle-aged, much-travelled man, who conceals his fatigue and indifference beneath an expression of superficial gaiety. Dominique is attracted to Luc, although she is simultaneously attracted to his warm-hearted and maternal wife; and, when Luc proposes that she should join him for an illicit holiday beside the Mediterranean, there seems no good reason why loyalty to Frangoise or Bertrand should stand in the way of a new adventure. The adventure is successful : its results are calamitous. Luc gently shrugs off Dominique as soon as they have returned to Paris; and she is plunged into a minor hell of loneliness and thwarted passion from which she only ascends by a series of slow and humiliating efforts.

So much for the outlines of the story—a story, on the face of it, neither particularly interesting nor markedly original. The heroine herself, however, is the last to pretend that she has experienced a unique catastrophe. In fact, it is the recogni- tion that she has not suffered alone, and that a predicament such as hers is among the commonplaces of human life, that enables her finally to escape from the closed circle of her own unhappiness. Her valedictory words set the tone of the book : 'A nouveau, je le savais, Totals seule. J'eus envie de nze dire ce mot a moi-meme. Seule. Seule. Mais en fin, quoi? letais une femme qui avail aime un homme. C'etait une histoire simple; it n'y avail pas de quoi faire des grimaces.' Thus, by refusing to grimace or protest, the adolescent narrator presumably becomes an adult. `A simple story,' she is obliged to agree; but, thanks to the sad lucidity of vision that I have mentioned earlier, Francoise Sagan has made it the basis of an oddly moving and absorbing book.

The tale is told with a remarkable economy of words. So far as an English reader can pretend to judge. Un Certain Sourire is uncommonly well-written, and conforms, moreover, to one of the finest traditions of classical French story- telling—that of La Princesse de Cleves, Manon Lescaut, Adotphe, Le Lys dans la ValMe and, in our own times, Radiguet's Le Diable au Corps, the tradition, that is to say, of the very short novel, scarcely longer than a long short-story, which, notwithstanding its spareness and slenderness, has all the complexity and variety of a full-length narrative. Having just read an exceedingly clever and unconscionably volumin- ous novel by a modern English woman writer, stuffed with redundant dialogue and otiose supplementary detail, I am the more inclined to appreciate Frangoise Sagan's literary virtues.

Imagine the same situation and the same scenes as they would probably have been treated by Miss X! For example, there is a passage that describes how Dominique, in company with Bertrand, Luc and Frangoise, visits Bertrand's mother at her country house. Young women, especially young women in love, are seldom very observant travellers; the house, she notes, is 'une asset belle maison, entouree de pelouses'; and what chiefly impresses her is the splendour of a luxurious bathroom. Here Miss X would undoubtedly have intervened with several paragraphs of 'fine writing.' We could hardly have been spared an exact description of the view from Dominique's bedroom window, of the pattern of the quilt on the foot of her bed and of the lighted candles on the polished table when, in a new dress with a tasteful antique brooch, she eventually comes down to dinner. None of these pre- liminaries interest Dominique, whose thoughts and fantasies are naturally reserved for Luc; and when she and Luc, after an embrace in the garden and various meetings at Parisian bars, elect to make their surreptitious expedition to a hotel in the South of France, we are excused from any discursions upon the beauty of the summer sea, although we are told that it is astonishingly blue and that the rocks are sharply red, and that Dominique, the child of an impoverished bourgeois family, has never encountered the sea before. . . .

Yet the story of their love-making has all the descriptive background it needs. A more elaborate and romantic setting would falsify the whole effect; for the adventure described is intended to remain light and casual, 'une aventure sans lendemain et sans sentimentalite,' in which pleasure is given and accepted, and the feelings of neither party are exposed to an intolerable strain. But such descriptive touches as the novelist does provide—Vans la chambre, la nuit, l'odeur suppliante et fade du mimosa d'ete'—are always deftly and accurately placed. A similar restraint, incidentally, is applied to her handling of sexual themes. In no way is the impression that she produces even remotely pornographic; and her London publishers, who found it expedient to remove one or two pas- sages from the translated version of Bonjour Tristesse, have now taken their courage in both hands and given us an English rendering* of Un Certain Sourire—an extremely readable piece of work, again by Miss Irene Ash—from which, so far as I can discover, only a single sentence has been snipped out. The most squeamish moralist should not regret their decision. As an incitement to wanton self-indulgence, the effect of this sombre little story—so sombre that it is almost a cautionary tale—seems likely to be small indeed.