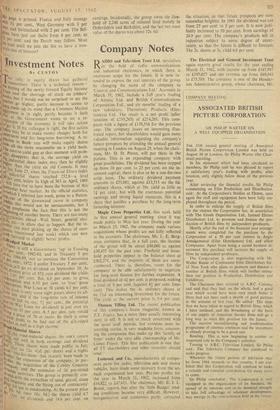 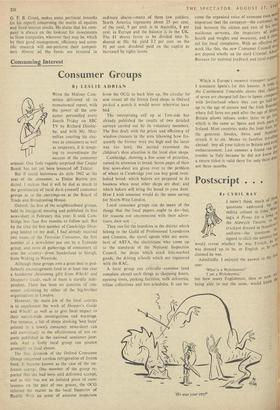 SIR PHILIP WARTER ON A WELL EQUIPPED OR

In his statement which had been circulated .to members, Sir Philip said he Was pleased to report a satisfactory year's trading with profits, after' taxation, only slightly below those of the previous year After reviewing the financial results, Sir Philip commenting on Film Production and Distribution, said: At the Corporation's Studios at Elstree, once again the staff and equipment have been fully em- ployed throughout the period.

In order to enlarge the supply of British films. for the cinema the Corporation has, in association with The Grade Organisation Ltd., formed Elstree Distributors Ltd. to promote and finance the pro- duction of British films by independent producers.

Shortly after the end of the financial year arrange- ments were completed for the purchase by the Corporation of a 50 per cent interest in Anglo Amalgamated (Film Distributors) Ltd. and allied Companies. Apart from being a sound business in- vestment this purchase will increase the supply of- films by independent producers.

The Corporation is also negotiating with Mr. Walter Reade of Continental Film Distributors Inc. of New York who plans to promote and finance a number of British films which will further streng- then our position in Production, Distribution and Exhibition.

The Chairman then referred to A.B.C. Cinemas and said that they had, on the whole, had a good year which would have been very much better if there had not been such a dearth of good pictures in the autumn of last year. He added: The steps that we have taken in regard to British films, which I have outlined, and the broadening of the basis of our supply of American feature films will go a long way to meet this position for the future.

The massive reconditioning and modernisation programme of cinemas continues and the investment is already proving to be a good one.

Bowling: This is now beginning to assume an important role in the Company's activities.

Whatever the future pattern of television may be from 1964 onwards in this country, I am con- fident that this CorpOration will continue to make a notable and essential contribution for many years to come.

Sir Philip concluded: The Corporation is well equipped in the organisation of its business, the spread of its interests and- in-its financial strength to take full advantage of whatever developments may emerge in the entertainment field in the future.

G. F. B. Grant, makes some pertinent remarks On his report) concerning the merits of equities and fixed-interest stocks. He states that his com- pany is always on the lookout for investments in those companies, wherever they may be, which by their good management, efficiency and scien- tific research will out-perform their competi- tors. Almost all the funds are invested in ordinary shares—many of them low yielders. North America represents about 25 per cent. of the total, 9 per cent. is in Australia, 8 per cent. in Europe and the balance is in the UK. The £1 shares (soon to be divided into 5s. shares) at 58s. 9d. yield 3.2 per cent. on the 9+ per cent. dividend paid on the capital as increased by rights issues.