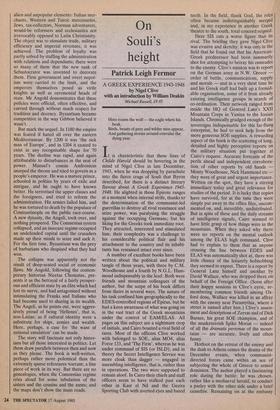 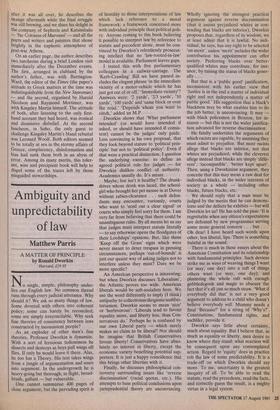 It is characteristic that these lines of Childe Harold should be hovering in the mind of Nigel Clive in late December, 1943, when he was dropping by parachute into the fierce crags of Souli that Byron described, for there is a distinct literary flavour about A Greek Experience 1943- 1948. He alighted in those Epirote ranges at a moment when internal strife, thanks to the determination of the communist-led guerrillas to destroy all rival resistance and seize power, was paralysing the struggle against the occupying Germans; but his liking for the Greeks took immediate root. They attracted, interested and stimulated him; their complexity was a challenge to his considerable political flair and his attachment to the country and its inhabi- tants has remained intact ever since.

A number of excellent books have been written about the political and military tangle of those years, with three by C.M. Woodhouse and a fourth by N.G.L. Ham- mond indispensably in the lead. Both were friends and mountain colleagues of the author, but the scope of his book differs from theirs in several ways. The nature of his task confined him geographically to the EDES-controlled regions of Epirus, but he had a keen awareness of what was going on in the vast tract of the Greek mountains under the control of EAM/ELAS. All pages on this subject are a nightmare crop of initials, and Cairo boasted a rival field of tares. Most of the officers Clive worked with belonged to SOE, alias M04, alias Force 133, and 'The Firm', whereas he was under command of SIS (or ISLD); and in theory the Secret Intelligence Service was more cloak than dagger — engaged in assembling intelligence, that is, rather than in operations. The two were supposed to remain aloof. In Cairo their chiefs and staff officers seem to have stalked past each other in Kasr el Nil and the Gezira Sporting Club with averted eyes and bared teeth. In the field, thank God, the roles often became indistinguishably merged and, in my experience in another Greek theatre to the south, total concord reigned.

Here SIS cuts a worse figure than its rival. The briefing they gave Nigel Clive was evasive and sketchy: it was only in the field that he found out that his American- Greek predecessor had been summarily shot for attempting to betray his comrades to the enemy. Clive's mission was to report on the German army in N.W. Greece order of battle, communications, supply and morale — and in a very short time he and his Greek staff had built up a formid- able organisation, some of it from already existing intelligence groups in search of co-ordination. Their network ranged from inside the HO of General Lanz's XXII Mountain Corps in Yanina to the Ionian Islands. Chronically grudged enough of the sovereigns indispensable for this far-flung enterprise, he had to seek help from the more generous SOE supplies. A rewarding aspect of the book is the scattering of long, detailed and highly perceptive reports on the military situation put together at Cairo's request. Accurate forecasts of the perils ahead and independent corrobora- tion of other reports by old hands Monty Woodhouse, Nick Hammond etc they were of great and urgent importance. Written on the spot, they have a stirring immediacy today and great relevance for studies of the period. It is lucky that copies have survived, for at the time they were simply put away in the office files, uncom- mented on, and, incredibly, undistributed. But in spite of these and the daily streams of intelligence signals, Cairo seemed to have little grasp of how things were in the mountains. When they asked why there were no reports on the mental outlook among the ELAS high command, Clive had to explain to them that as anyone crossing the line between EDES and ELAS was automatically shot at, there was little chance of the leisurely hobnobbing they seemed to expect. There is a report by General Lanz himself and another by David Wallace, who was dropped there on behalf of the Foreign Office. (Soon after their happy sessions in Clive's eyrie, re- membering common friends among Ox- ford dons, Wallace was killed in an affray with the enemy near Paramythia, where a street is named after him.) Clive's assess- ment and descriptions of Zervas and of Dick Barnes, his great SOE champion, and of the musketeerish Spike Moran — indeed of all the dramatis personae of the moun- tains — are accurate, lively and often funny.

Hotfoot on the retreat of the enemy and the dash to Athens comes the drama of the December events, when communist- directed forces came within an ace of subjecting the whole of Greece to armed dominion. The author played a fascinating role during the battle: he was chosen, rather like a mediaeval herald, to conduct a parley with the other side under a brief ceasefire. Remaining on at the embassy after it was all over, he describes the strange aftermath while the final struggle was still brewing, and we share his delight in the company of Sepheris and Katsimbalis — 'the Colossus of Maroussi' — and all the poets and writers and painters that shone brightly in the euphoric atmosphere of post-war Athens.

On an earlier page, the author describes two luncheons during a brief London visit immediately after the December events. The first, arranged in clubland by the author's father, was with Barrington- Ward, the editor of the Times (the paper's attitude to Greek matters at the time was indistinguishable from the New Statesman) — and the second, organised by Harold Nicolson and Raymond Mortimer, was with Kingsley Martin himself. The attitude of both, after listening to the only first- hand account they had heard, was ironical and dismissive disbelief. At the second luncheon, in Soho, the only guest to challenge Kingsley Martin's bland rebuttal was Leonard Woolf. Both editors seemed to be totally at sea in the stormy affairs of Greece; complacency, disinformation and bias had sunk them both in an abyss of error. Among its many merits, this toler- ant, wise and percipient book will help to dispel some of the traces left by those misguided stewardships.