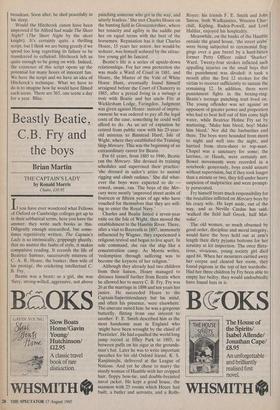 THE CAPTAIN'S LADY by Ronald Morris

If you have ever wondered what Fellows of Oxford or Cambridge colleges get up to in their sabbatical terms, here you have the answer: they write such books as this. Diligently enough researched, but some- times repetitively written, The Captain's Lady is so intrinsically, grippingly ghastly, that no matter the faults of style, it makes compulsive reading. It records the life of Beatrice Sumner, successively mistress of C. A. R. Hoare, the hanker, then wife of his protégé, the cricketing intellectual C. B. Fry.

Beatie was a beast: as a girl, she was 'fiery, strong-willed, aggressive, not above punching someone who got in the way, and utterly fearless.' She met Charles Hoare on the hunting field in Gloucestershire, where her tenacity and agility in the saddle put her on equal terms with the best of the horsemen. Reputation has it that Charles Hoare, 15 years her senior, her would-be seducer, was himself seduced by the attrac- tive young girl he fancied.

Beatie's life is a series of upside-down relationships. For her own protection she was made a Ward of Court in 1881, and Hoare, the Master of the Vale of White Horse Hunt, eventually found himself arraigned before the Court of Chancery in 1885, after a period living in a ménage troth with Beatie and her uncle Fitz at Wicklesham Lodge, Faringdon. Judgment was given against Hoare: instead of impris- onment he was ordered to pay all the legal costs of the case, something he could well afford to do. As an act of expiation he retired from public view with his 23-year- old mistress to Binstead Hard, Isle of Wight, where they established the Training Ship Mercury. This was the beginning of an extraordinary career for Beatie.

For 61 years, from 1885 to 1946, Beatie ran the Mercury. She devised its training schedules and supervised their practice: `she dressed in sailor's attire to ascend rigging and climb ratlines.' She did what- ever the boys were expected to do rowed, swam, ran. The boys of the Mer- cury were mostly 'improved street arabs of fourteen or fifteen years of age who have vouched for themselves that they are will- ing to enter the Royal Navy.'

Charles and Beatie lasted a seven-year exile on the Isle of Wight, then moved the establishment to the Hamble River. There, after a visit to Bayreuth in 1897, immensely influenced by Wagner, they experienced a religious revival and began to live apart. In sole command, she ran the ship like a concentration camp. As Morris writes, `redemption through suffering was to become the keynote of her religion.'

Although they already had two children from their liaison, Hoare managed to distance himself further from Beatie when he allowed her to marry C. B. Fry. Fry was 26 at the marriage in 1898 and ten years her junior. He succeeded Hoare to the Captain-Superintendancy but his mind, and often his presence, were elsewhere. The sinecure suited him: he was a gorgeous butterfly, flitting from one interest to another. F. E. Smith described him as the most handsome man in England who `might have been wrought by the chisel of Praxiteles'. He had equalled the world long jump record at Iffley Park in 1893, in between puffs on his cigar in the grounds- man's hut. Later he was to write important speeches for his old Oxford friend, K. S. Ranjitsinjhi, delivered at the League of Nations. And yet he chose to marry the sturdy woman of Hamble with her cropped hair, floppy bow-tie, and double-breasted naval jacket. He kept a good house, the mansion with 25 rooms which Hoare had built, a butler and servants, and a Rolls- Royce: his friends F. E. Smith and John Simon, both Wadhamites, Winston Chur- chill, Kipling, Baden-Powell, and Lord Halifax, enjoyed his hospitality.

Meanwhile, on the banks of the Hamble outside the grand house, 'the street arabs' were being subjected to ceremonial flog- gings over a gun barrel by a hard-bitten former Petty Officer called 'Sharkey' Ward. Twenty-four strokes inflicted such appalling injuries on the small boys that the punishment was divided: it took a month after the first 12 strokes for the victim to recover sufficiently to sustain the remaining 12. In addition, there were punishment fights in the boxing-ring: Beatie's teenage punching trait lived on. The young offender was set against an opponent of greater power and proportion who had to beat hell out of him come high water, while Beatrice Holme Fry sat by muttering, 'Make• him bleed, boy! Make him bleed.' Nor did the barbarities end there. The boys were hounded from morn to night and well into the night, and harried from stern-sheet to top-mast. Chapel was a sanctuary for some; the latrines, or Heads, were certainly not.

Bowel movements were recorded in a notebook: generously, boys could urinate without supervision, but if they took longer than a minute or two, they fell under heavy suspicion of malpractice and were prompt- ly persecuted.

Fry himself bears much responsibility for

• the brutalities inflicted on Mercury boys by his crazy wife. He kept aside, out of the

way, and as Neville Cardus has said, `walked the field half Greek, half Mal- volio'.

The old woman, so much obsessed by good order, discipline and moral integrity, would have the boys hold out at arm's

length their dirty. pyjama bottoms for her scrutiny at kit inspection. The once flirta-

tious, vivacious, young society girl died aged 84. When her mourners carried away her corpse and cleared her room, they found pigeons in the top of her wardrobe. Had her three children by Fry been able to empty her belfry, they would undoubtedly have found bats in it.