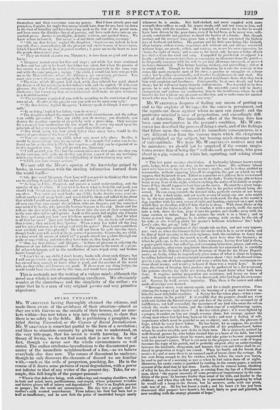 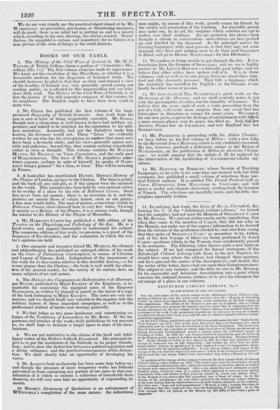 MR. WAKEFIELD having thoroughly alarmed the citizens, and made them aware of the awfulness of their situation—placed as they are with thieves on the outside of their houses, and no mus- kets within—has now taken a trip into the country, to show that there is no safety in the fields. He is publishing a pamphlet, en- titled Swing Unmasked, or the Causes of Rural Incendiarism. Mr. WAKEFIELD is somewhat partial to the form of a revelation; and likes to stimulate curiosity by giving you to understand, on the very title-page, that his secret is worth knowing. In this theory of Swing, we do not find much that is new in the way of fact, though we never saw the whole circumstances so well stated. The author attributes incendiarism to the discontented pea- santry of the immediate neighbourhood of a fire,—as we believe everybody else does now. The causes of discontent he analyses; though he only discovers the elements of discord we are familiar with,—such as the evils of pauperism, poaching, &c. He in the course of it draws some pictures of rural degradation, with a power not inferior to that of any writer of the present day. Take, for ex- ample, this full-length of the pauper-peasant- " Whatis that defective being, with calliess legs and stooping shoulders, weak in body and mind, inert, pusillanimous, and stupid, whose. premature wrinkles and furtive glance tell of misery and degradation? That is an English peasant or pauper; for the words are synonymous. His sire was a pauper, and his mother's milk wanted nourishment. From infancy his food had been bad as Well as insufficient; and he now feels the pains of unsatisfied hunger .nearly whenever he is awake. But half-clothed, and never supplied with more warmth than suffices to cook his scanty meals, cold and wet come to him, and stay by him, with the weather. He is married, of course; for to this he would have been driven by the poor-laws, even if he had been, as he never was, suffi- ciently comfortable and prudent to dread the burden of a family. But, though instinct and the overseer have given him a wife, he has not tasted the highest joys of husband and father. His partner and his little ones being, like lainiself, often hungry, seldom warm, sometimes sick without aid, and always sorrowful without hope, are greedy, selfish, and vexing; so, to use his own expression, he ' hates the sight of them,' and resorts to his hovel only because a hedge affords less shelter from the wind and rain. Compelled by parish-law to support his family—which means to join them in consuming an allowance from the parish- 111! frequently conspires with his wife to get that allowance increased, or previa t its being diminished. This brings begging, trickery, and quarrelling ; and en ill settled craft. Though he have the inclination, le wants the courage to be- come, like more energetic men of his class, a poacher or smuggler on a large stale ; but he pilfers occasionally, and teaches his children to lie and steal. His subdued and slavish manner towards his great neighbours shows that they treat him with suspicion and harshness. Consequently, he at once dreads and hates them; but he will never harm them by violent means. Too degraded to be des- perate, he is only thoroughly depraved. His miserable career will be short : rheumatism and asthma arc conducting- him to the workhouse, where he will breathe his last without one pleasant recollection, and so make room for another wretch who may live and die in the same way."

Mr. WAKEFIELD despairs of finding any means of putting an end to the exploits of Swing,—for the cause is permanent, and the agents are those against whom no man can guard ; and the particular mischief is easy of perpetration, and exceedingly diffi- cult of detection. The immediate effect of the Swing fires has been some amelioration in the peasant's condition. Mr. WAKE- FIELD has described the process of firing a stack, and of the feelings that follow upon the crime, and its immediate consequences, in a -.-ery different tone from the various tracts which the clergymen have published on the subject, but bearing much stronger marks of verisimilitude. We hope Mr. WAKEFIELD'S motives may not be mistaken: we should not be surprised if the county magis- trates accuse him of being the " well-dressed gentleman, who goes about in a gig, wearing a white hat, squinting, and asking about master."