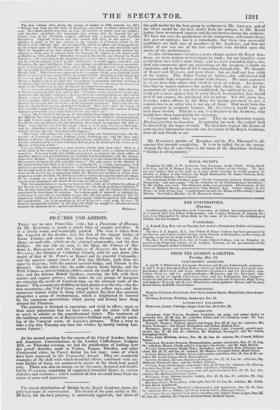 Page 21, 17 December 1831 — The recent distribution of Medals by the Royal Academy, forms
Close

The recent distribution of Medals by the Royal Academy, forms

the principal topic of conversation. The award of the gold medal to Mr. Al`LisE, for the best painting, is universally approved; but those of

the gold medal for the best group in sculpture to Mr. ARNALD, and of the silver medal for the best model from the antique, to Mr. RoSst junior, have occasioned surprise and dissatisfaction among the students. We have not seen the productions of the competitors, and cannot there- fore give an opinion; but it is remarkable, that these two successful candidates are both sons of members of the Academy; and that the father of one was one of the two sculptors who decided upon the merits of the performances.

As this circumstance involves a grave charge against the Royal Aca- demy, we were anxious to investigate its truth ; but our inquiries were everywhere met with a mute shrug ; and awe were reminded, that a stu- dent who comments upon any proceedings of the Academy is liable to expulsion, and to the ban of the Corporation through life. We thought of BARRY and HAvooN, and were silent : but we shall not lose sight of the matter. This Select Vestry of Artists-this self-elected and irresponsible body corporate-teems with abuses. We must anatomize it, as we have clone others that stand in need of reform. An institu- tion that no longer embraces the genius that adorns the arts, for the promotion of which it was first established, has outlived its use. We could put a name against that of every Royal Academician, that should rival if' not surpass the privileged few in talent. Yet this junta has, it seems, taken offence at the King for baying presumed to give a commission to an artist who is not one of them. Had merit been the only passport to academic honours, Mr. STANFIELD would long ago have been elected. That he is not, is a disgrace to the Academy, who would have been honoured by his accession. " Corporate bodies have DO soul." 'They do not therefore require Burkina previous to dissection. In pursuing our task, the scalpel shall be directed by the finger of truth. We therefore request the favour of authenticated information towards our ANATOMY of the Royal Academy, from all real friends to art.