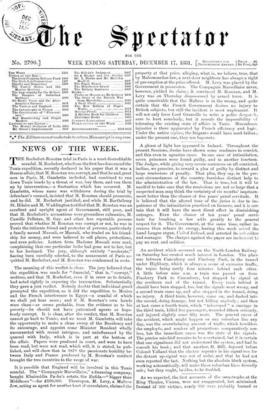 Page 1, 17 December 1881 — A gleam of light has appeared in Ireland. Throughout the
Close

A gleam of light has appeared in Ireland. Throughout the

present Sessions, Juries have shown some readiness to convict, and this even in agrarian cases. In one case of intimidation, seven prisoners were found guilty, and in another fourteen. The Judges, while giving very severe sentences on all convicted, incline, we perceive, to reward a plea of guilty by distinct and large remissions of penalty. That plea, they say, in the pre- sent circumstances of the country, furnishes distinct help to the administration of the law. That is true, but it will be needful to take care that the remissions are not so large that a suspected man may think the certainty of six months' imprison- ment better than the chance of five years' penal servitude. It is believed that the altered tone of the juries is due to im- patience of the intimidation practised on farmers, and it is cer-

tain that it will have the most direct effect in diminishing outrages. Even the chance of ten years' penal servi- tude for breaking a law adds greatly to the general respect for it. The Government, at the same time, rather in- creases than relaxes its energy, having this week seized the Land League organ, United Ireland, and arrested its sub-editor and manager. The charges against the paper are incitement to pay no rent and sedition.