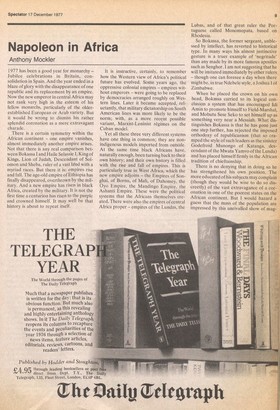 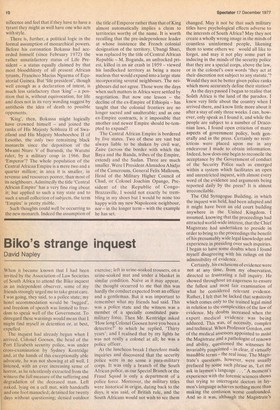 1977 has been a good year for monarchy — Jubilee celebrations in Britain, consolidation in Spain. And the year ended in a blaze of glory with the disappearance of one republic and its replacement by an empire. Now the new emperor in central Africa may not rank very high in the esteem of his fellow monarchs, particularly of the olderestablished European or Arab variety. But it would be wrong to dismiss his rather splendid coronation as a mere extravagant charade.

There is a certain symmetry within the African continent — one empire vanishes, almost immediately another empire arises. Not that there is any real comparison between Bokassa land Haile Selassie I, King of Kings, Lion of Judah, Descendant of Solomon and Sheba, ruler of a vast land with a myriad races. But there it is: empires rise and fall. The age-old empire of Ethiopia has finally disappeared, overthrown by the military. And a new empire has risen in black Africa, created by the military. It is not the first time a centurion has risen to the purple and crowned himself. It may well be that history is about to repeat itself, It is instructive, certainly, to remember how the Western view of Africa's political future has evolved. Some years ago, the oppressive colonial empires — empires without emperors — were going to be replaced by democracies arranged roughly on Western lines. Later it became accepted, reluctantly, that military dictatorship on South American lines was more likely to be the norm; with, as a more recent possible variant, Marxist-Leninist regimes on the Cuban model.

Yet all these three very different systems have one thing in common; they are nonindigenous models imported from outside. At the same time black Africans have, naturally enough, been turning back to their own history; and their own history is filled with the rise and fall of empires. This is particularly true in West Africa, which the new empire adjoins — the Empires of Songhai, of Bornu, of Mali, of Dahomey, the Oyo Empire, the Mandingo Empire, the Ashanti Empire. These were the political systems that the Africans themselves created. There were also the empires of central Africa proper — empires of the Lundas, the Lubas, and of that great ruler the Portuguese called Monomopata, based on Rhodesia.

So Bokassa, the former sergeant, unblessed by intellect, has reverted to historical type. in many ways his almost instinctive gesture is a truer example of 'negritude' than any made by its more famous apostles such as Senghor. I am not suggesting that he will be imitated immediately by other rulers — though one can foresee a day when there might be, in true Ndebele style, a Joshua 1 of Zimbabwe.

When he placed the crown on his own head, Bokassa carried to its logical conclusion a system that has encouraged [di Amin to promote himself to Field-Marshal, and Mobutu Sese Seko to set himself up as something very near a Messiah. What distinguishes Bokassa is that he has gone just one step further, has rejected the imposed orthodoxy of republicanism (that so cramped the style of such leaders as the sinister Godefroid Munongo of Katanga, descendant of the Mwata Yamvo of the Lunda) and has placed himself firmly in the African tradition of chieftainship.

There is no denying that in doing so he has strengthened his own position. The more educated of his subjects may complain (though they would be wise to do so discreetly) of the vast extravagance of a coronation in one of the poorest states on the African continent. But I would hazard a guess that the mass of the population are impressed by this unrivalled show of mag nificence and feel that if they have to have a tyrant they might as well have one who acts with style.

There is, further, a political logic in the formal assumption of monarchical powers. Before his coronation Bokassa had accorded himself (since February 1972) the rather unsatisfactory status of Life President — a status equally claimed by that most bloodthirsty of all present African tyrants, Francisco Macias Nguema of Equatorial Guinea. But 'life president', though well enough as a declaration of intent, is much less satisfactory than 'king' — a position that is, without equivocation, for life and does not in its very wording suggest by antithesis the idea of death to possible opponents.

'King', then, Bokassa might logically have crowned himself — and joined the ranks of His Majesty Sobhuza II of Swaziland and His Majesty Moshoeshoe H of Lesotho, the only two remaining black monarchs since the deposition of the Mwaini N tare V of Burundi, the Watutsi ruler, by a military coup in 1966. But 'Emperor"? The whole population of the Central African Empire is a mere two and a quarter million; in area it is smaller, in revenue and resources poorer, than most of its neighbours. Admittedly the title 'Central African Empire' has a very fine ring about it; but applied to such a tiny state and to such a small collection of subjects, the term 'Empire' is pretty risible.

Such thoughts could well be occurring to the new monarch. Indeed the assumption of the title of Emperor rather than that of King almost automatically implies a claim to territories worthy of the name. It is worth recalling that the pre-independence leader at whose insistence the French colonial designation of the territory, Ubangi Shari, was replaced by the title of Central African Republic — M. Boganda, an unfrocked priest, killed in an air crash in 1959 — viewed his landlocked territory as being a mere nucleus that would expand into a large state incorporating several neighbours. The neighbours did not agree. Those were the days when such matters in Africa were settled by negotiation. But now one lesson — the decline of the ex-Empire of Ethiopia — has taught that the colonial frontiers are no longer sacred and unalterable; and as one ex-Empire contracts, is it impossible that another and newer Empire should be.tempted to expand?

The Central African Empire is bordered by five states. Two of these are vast but always liable to be shaken by civil war, Zaire (across the border with which the Baya and the Banda, tribes of the Empire, extend) and the Sudan. Three are much smaller. Were I President A hmado u Ahidjo of the Camerouns, General Felix Malloum, Head of the Military Higher Council of Chad, or Colonel Joachim Opango, President of the Republic of CongoBrazzaville, I would not exactly be trembling in my shoes but 1 would be none too happy with my new Napoleonic neighbour, nor — in the longer term — with the example he has set.