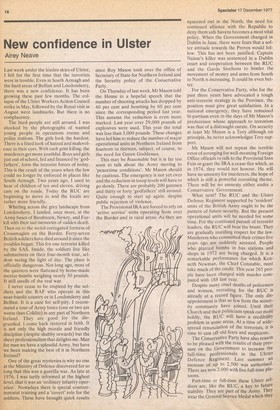 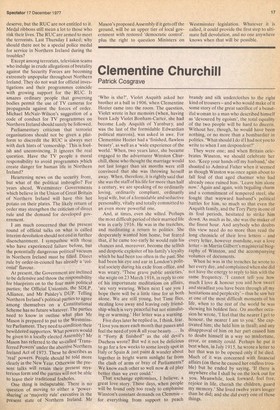 Last week under the leaden skies of Ulster, I felt for the first time that the terrorists were in trouble. Even in South Armagh and the hard areas of Belfast and Londonderry, there was a new confidence. It has been growing these past few months. The collapse of the Ulster Workers Action Council strike in May, followed by the Royal visit in August were landmarks. But there is no complacency.

• The hard people are still around. I was shocked by the photographs of wanted young people in operations rooms and police stations. The girls look the hardest. There is a fixed look of hatred and malevolence in their eyes. With each grim killing, the murderers get more youthful. Boys and girls just out of school, fed and financed by 'godfathers', form the terrorist forces of today. This is the result of the years when the law could no longer be enforced in places like South Armagh. Two years ago, I used to hear of children of ten and eleven, driving cars on the roads. Today the RUC are beginning to move in and the locals arc rather more friendly.

Whirling across the grey landscape from Londonderry, I landed, once more, at the Army bases of Bessbrook, Newry, and Forkill with their sad memories of sudden death. Then on to the weird corrugated fortress of Crossmaglen on the Border. Forty-seven British soldiers have died around it since the troubles began. This for one terrorist killed by the SAS. Inside, the soldiers live like submariners on their four-month tour, seldom seeing the light of day. The place is officially dangerous. Not long ago, most of the quarters were flattened by home-made mortar-bombs weighing nearly 30 pounds. It still smells of the real war.

I never cease to be inspired by the soldiers and the RAF who operate in this near-bandit country or in Londonderry and Belfast. It is a cure for self-pity. I recommend a tour of Army bases (one or two are worse than Colditz) in any part of Northern Ireland. They are good for the disgruntled. I come back restored in faith. It is not only the high morale and friendly discipline (despite shabby rewards) but the sheer professionalism that delights me. Man for man we have a splendid Army, but have we been making the best of it in Northern Ireland?

One of the great mysteries is why no one at the Ministry of Defence discovered for so long that this was a guerilla war. As late at 1976, I was tartly informed at the highest level, that it was an 'ordinary infantry oper ation'. Nowadays there is special counterterrorist training and a 'covert' role for the soldiers. These have brought quick results since Roy Mason took over the office of Secretary of State for Northern Ireland and the Security policy of the Conservative Party, On Thursday of last week, Mr Mason told the House in a hopeful speech that the number of shooting attacks has dropped by 40 per cent and bombing by 60 per cent since the corresponding period last year. This autumn the reduction is even more marked. Last year over 29,000 pounds of explosives were used. This year the total was less than 5,000 pounds. These changes have led him to reduce the number of major operational units in Northern Ireland from fourteen to thirteen, subject, of course, to the need for Green Goddesses.

This may be /leasonable but it is far too soon to talk about the Army, moving to 'peacetime conditions'. Mr Mason should be cautious. The emergency is not yet over and the reduction in troop levels will have to go slowly. There are probably 200 gunmen and thirty or forty 'godfathers' still around. Quite enough to start up again, despite public rejection of violence.

The Provisional IRA are forced to rely on 'active service' units operating from over the Border and in rural areas. As they are squeezed out in the North, the need for continued alliance with the Republic to deny them safe havens becomes a most vital policy. When the Government changed in Dublin in June, there were fears that a softer attitude towards the Provos would follow. This has not been justified. Captain Nairac's killer was sentenced in a Dublin court and cooperation between the RUC and the Garda Siochana to hinder the movement of money and arms from South to North is increasing. It could be even better.

For the Conservative Party, who for the past three years have advocated a tough anti-terrorist strategy in the Province, the position must give great satisfaction. In a national emergency, they have remained bi-partisan even in the days of Mr Mason's predecessor whose approach to terrorism was that of a distraught curate. On security at least Mr Mason is a Tory although on principle, he never acknowledges Tory support.

Mr Mason will not repeat the terrible error of arranging for well-meaning Foreign Office officials to talk to the Provincial Sinn Fein or grant the IRA a cease-fire which, as in 1974, they would not honour. He will have no amnesty for murderers, the hope of which is still a powerful recruiting theme. There will be no amnesty either under a Conservative Government.

What next? The RUC and the Ulster Defence Regiment supported by 'resident' units of the British Army ought to be the pattern of future security. But the present operational units will be needed for some time. For the continued pursuit of terrorist leaders, the RUC will bear the brunt. They are gradually instilling respect for the law. Murderers who committed their crimes five years ago are suddenly arrested. People who planted bombs in bus stations and shops in 1972 are being charged. It is a remarkable performance for which Kenneth Newman, the Chief Constable, must take much Of the credit. This year 265 people have been charged with murder compared with 188 last year.

Despite many cruel deaths of policemen and women, recruiting for the RUC is already at a record figure. The only disappointment is that so few from the minority community have joined. Until their Church and their politicians speak out more boldly, the RUC will have a credibility problem in some areas. At a time of widespread renunciation of the' terrorists, it is time to cast off old fears and suspicions. The Conservative Party have also reason to be pleased with the results of their pressure on the Government to increase the full-time professionals in the Ulster Defence Regiment. Last summer an increase of up to 2,500 was authorised. There are now 2.000 with five full-time platoons.

Part-time or full-time these Ulster soldiers are, like the RUC, a key to future stability. They are part of the Army. They wear the General Service Medal which they deserve, but the RUC are not entitled to it. Medal ribbons still mean a lot to those who risk their lives. The RUC are armed to meet the terrorists. Last Thursday I asked; why should there not be a special police medal for service in Northern Ireland during the troubles?

Except among terrorists, television teams who indulge in crude allegations of brutality against the Security Forces are becoming extremely unpopular throughout Northern Ireland. They do not wait for official investigations and their programmes coincide with growing support for the RUC. It amazes ordinary people that governing bodies permit the use of TV cameras for propaganda against the forces of order. Michael McNair-Wilson's suggestion of a code of conduct for TV programmes on Northern Ireland should surely be followed.

Parliamentary criticism that terrorist organisations should not be given a platform to discredit the RUC is always met with dark hints of 'censorship.' This is foolish and unconvincing. It ignores the real question. Have the TV people a moral responsibility to avoid programmes ;which create danger for human life in Northern Ireland?

Heartening news on the security front, but what of the political imbroglio? For years ahead, Westminster Governments which believe in the Union of Great Britain of Northern Ireland will have this hot potato on their plates. The likely return of order may strengthen the criticism of direct rule and the demand for developed government.

I am much concerned that the present round of official talks on what is called interim devolution should not end in further disenchantment. I sympathise with those who have experienced failure before, but the potentially dangerous political vacuum in Northern Ireland must be filled. Direct rule by order-in-council has already a 'colonial' flavour.

At present, the Government are inclined to be defensive and throw the responsibility for blueprints on to the four main political parties; the Official Unionists, the SDLP, Alliance, and Mr Paisley's DUP. Telling Northern Ireland's political parties to agree among themselves on a Constitutional Scheme has no future whatever. The parties need to know in outline what plan Mr Mason is prepared to put to the Westminster Parliament. They need to condition their bewildered supporters. What powers would be given to a locally elected Assembly? Mr Mason has referred to the so-called 'Transferred Powers' under the abortive Northern Ireland Act of 1973. These he describes as 'rear powers. People should be told more clearly in the New Year. Otherwise the present talks will retain their present mysterious form and the parties will not be able to leave their traditional foxholes.

One thing is indisputable. There is no question of moving to either a 'powersharing' or 'majority rule' executive in the present state of Northern Ireland. Mr Mason's proposed Assembly if it gets off the ground, will be an upper tier of local government with restored 'democratic control'. plus the right to question Ministers on Westminster legislation. Whatever it is called, it could provide the first step to ultimate full devolution, and no one anywhere knows when that will be possible.