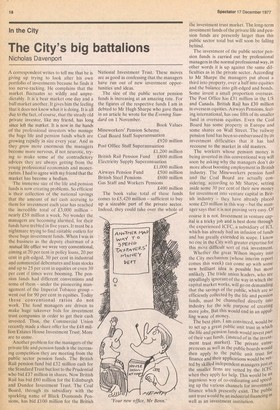 A correspondent writes to tell me that he is giving up trying to look after his own portfolio of investments because he finds it too nerve-racking. He complains that the market fluctuates so wildly and unpredictably. It is'a bear market one day and a bull market another. It gives him the feeling that it does not know what it is doing. It is all due to the fact, of course, that t he steady old private investor, like my friend, has long since left the market. It is now in the hands of the professional investors who manage the huge life and pension funds which are growing rapidly in size every year. And as they grow more enormous the managers become more nervous, if not neurotic, trying to make sense of the contradictory advices they are always getting from the young professional economists and monetrarists. I had to agree with my friend that the market has become a bedlam.

The immense size of the life and pension funds is now creating problems. So efficient is their collection of the national savings that the amount of net cash accruing to them for investment each year has reached the incredible total of £3,000 million — nearly £58 million a week. No wonder the managers are becoming alarmed, for their funds have trebled in five years. It must be a nightmare trying to find suitable outlets for these huge investment funds. When I was in the business as the deputy chairman of a mutual life office we were very conventional, aiming at 20 per cent in policy loans, 20 per cent in gilt-edged, 30 per cent in industrial and commercial debentures and loan stocks and up to 25 per cent in equities or even 30 per cent if times were booming. The pension funds had different conventions and some of them — under the pioneering management of the Imperial Tobacco group — went out for 90 per cent in equities. Today these conventional ratios do not work. The fund .managers are driven to make huge takeover bids for investment trust companies in order to get their cash invested. Thus, the Commercial Union recently made a share offer for the £48 million Estates House Investment Trust. More are to come.

Another problem for the managers of the private life and pension funds is the increasing competition they are meeting from the public sector pension funds. The British Rail pension fund bid £32 million cash for the Standard Trust but lost to the Prudential who hid £37 million in shares. Now British Rail has bid £80 million for the Edinburgh and Dundee Investment Trust. The Coal Board, through its subsidiary with the sparkling name of Black Diamonds Pensions, has bid £100 million for the British National Investment Trust. These moves are as good as confessing that the managers have run out of new investment opportunities and ideas.

The size of the public sector pension funds is increasing at an amazing rate. For the figures of the respective funds I am in debted to Mr Hugh Sharpe who gave them in an article he wrote for the Evening Standard on 1 November.

The investment of the public sector pension funds is carried out by professional managers in the normal professional way, in other words it is up against the same difficulties as in the private sector. According to Mr Sharpe the managers put about a third into property, over a half into equities and the balance into gilt-edged and bonds. Some invest a small proportion overseas. The Post Office has £31 million in the US and Canada. British Rakl has £30 million in overseas equities. Airways Pensions, feeling international, has one fifth of its smaller fund in overseas equities. Even the Coal Board has some property in Europe and some shares on Wall Street. The railway pension fund has been so embarrassed by its investment difficulties that it has had recourse to the market in old masters.

The workers whose pension money is being invested in this conventional way will soon be asking why the managers don't do more about boosting employment in British industry. The Mineworkers pension fund and the Coal Board are actually considering, according to Mr Sharpe, setting aside some 30 per cent of their new money for investment into venture capital in Brit. ish industry — they have already placed some £20 million in this way—hut the manager says that it is not proving very easy. Of course it is not. Investment in venture capital is a tricky job and is best done through the experienced 1CFC, a subsidiary of ICI, which has already had an infusion of funds and has greatly extended its scope. I know no one in the City with greater expertise for this most difficult sort of risk investment.

Whether the great Wilson inquiry into the City mechanism (whose interim report comes this week) can come up with some new brilliant idea is possible but most unlikely. The trade union leaders, who are appallingly ignorant of the way in which the capital market works, will go on demanding that the savings of the public, which are so efficiently collected by the life and pension funds, must be channelled directly into industry for the sole purpose of creating more jobs. But this would end in an appal' I i nTg hwe abs et es topf amno, ni eaym. convinced, would be to set up a great public unit trust in which the life and pension funds would invest part of their vast funds. (instead of in the invest ment trust market). The private entrepreneurs as well as the public boards would then apply to the public unit trust for finance and their applications would be vetted by skilled independent managers just as the smaller firms are vetted by the ICFC when they apply for help. This would be an ingenious way of co-ordinating and speed" ing up the various channels for investmer.a finance which presently exist. The public unit trust would be an industrial financing as well as an investment institution.