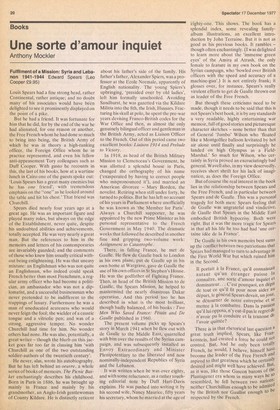 Fulfilment of a Mission: Syria and Lebanon 1941-1944 Edward Spears (Leo Cooper £9.95) Louis Spears had a fine strong head, rather Continental, rather antique; and no doubt many of his associates would have been delighted to see it prominently displayed on the point of a pike.

But he had a friend. It was fortunate for him that he did, for by the end of the war he had alienated, for one reason or another, the Free French whom he had done so much to bring into being, the British Army of which he was in theory a high-ranking officer, the Foreign Office whom he in practice represented, and even his fellow anti-appeasement Tory colleagues such as Duff Cooper. With gusto he recounts in this, the last of his books, how at a wartime lunch in Cairo one of the guests spoke out: 'Louis Spears has a great many enemies but he has one friend', with tremendous emphasis on the "one" as he looked around the table and hit his chest.' That friend was Churchill.

Spears died nearly four years ago at a great age. He was an important figure and played many roles, but always on the edge of the Establishment, never quite, despite his undoubted abilities and achievements, totally accepted. He was very nearly a great man. But the references to him in the memoirs and letters of his contemporaries are invariably guarded; and the comments of those who knew him usually critical without being enlightening. He was that uneasy mixture: an Englishman who was not quite an Englishman, who indeed could speak French better than most Frenchmen, a regular army officer who had become a politician, an ambassador who was not a diplomatist, and a successful businessman who never pretended to be indifferent to the trappings of luxury. Furthermore he was a man of uneducated acuteness who would never feign the fool; the wielder of a caustic tongue and a vitriolic pen; and was of a strong, aggressive temper. No wonder Churchill had time for him. No wonder others had none..He was also, potentially, a great writer — though the blurb on this jacket goes far too far in classing him 'with Churchill as one of the two outstanding soldier-authors of the twentieth century'.

He never, alas, wrote his autobiography. But he has left behind an oeuvre, a whole series of books of memoirs. The Picnic Basket enchantingly describes his childhood. Born in Paris in 1886, he was brought up mainly in France and mainly by his grandmother, an Anglo-Irish gentlewoman of County Kildare. He is distinctly reticent about his father's side of the family. His father's father, Alexander Spiers, was a professor at the Ecole Normale, apparently of English nationality. The young Spiers's upbringing, 'presided over by old ladies', left him formally unschooled. Avoiding Sandhurst, he was gazetted via the Kildare Militia into the 8th, the Irish, Hussars. Fracturing his skull at polo, he spent the pre-war years devising Franco-British codes for the War Office and then, as almost the only genuinely bilingual officer and gentleman in the British Army, acted as Liaison Officer to the French. Out of this period came two excellent books: Liaison 1914 and Prelude to Victory.

In 1918, as head of the British Military Mission to Clemenceau's Government, he was allotted a splendid house in Paris, changed the orthography of his name ('exasperated by having to correct people who mispronounced it'), and married an American divorcee — Mary Borden, the novelist. Retiring when still under forty, he turned to politics. But he has left no account of his years in Parliament where unofficially he was known as 'the Member for Paris'. Always a Churchill supporter, he was appointed by the new Prime Minister as his personal representative to the French Government in May 1940. The dramatic weeks that followed he described in another fine and gripping two-volume work: Assignment to Catastrophe.

There, in falling France, he met de Gaulle. He flew de Gaulle back to London in his own plane, put de Gaulle up in his own home at Wargrave, gave de Gaulle the use of his own offices in St Stephen's House. He was the godfather of Fighting France. Then, as head of the British Mission to de Gaulle, the Spears Mission, he helped to mastermind the nearly disastrous Dakar operation. And this period too he has described in what is the most brilliant, though badly balanced, of his books Two Men Who Saved France: Main and De Gaulle published in 1960.

The present volume picks up Spears's story in March 1941 when he flew out with de Gaulle to the Middle East, quarrelled with him over the results of the Syrian campaign, and was subsequently installed as Envoy Extraordinary and Minister Plenipotentiary to the liberated and now nominally-independent Republics of Syria and the Lebanon.

It was written when he was over eighty, and with some reluctance, as a rather touching editorial note by Duff Hart-Davis explains. He was pushed into writing it by his second wife, Nancy Maurice, fifty years his secretary, whom he married at the age of eighty-one. This shows. The book has a splendid index, some revealing familyalbum illustrations, an excellent introduction by John Terraine. But it is not as good as his previous books. It rambles — though often enchantingly. (I was delighted to learn more about the 'immense green eyes' of the Amira at Atrash, the only female to feature in my own book on the Syrian campaign, who 'bowled over British officers with the speed and accuracy of a machine-gun'.) It is not entirely frank; it glosses over, for instance, Spears's really virulent efforts to get de Gaulle thrown out as leader of the Free French.

But though these criticisms need to be made, though it needs to be said that this is not Spears's best book, it is by any standards a very readable, highly entertaining war memoir, full of good stories and picturesque character sketches — none better than that of General 'Jumbo' Wilson who 'floated like a Montgolfier balloon levitated by hot air alone until finally and surprisingly he landed on high Olympus as a FieldMarshal.' So much for Wilson, who certainly in Syria proved an excruciatingly bad general. \Navel' also, in my view deservedly, receives short shrift for his lack of imagination, as does the Foreign Office.

But of course the real interest in the book lies in the relationship between Spears and the Free French, and in particular between Spears and de Gaulle. This was a personal tragedy for both men: Spears feeling that de Gaulle was ungrateful and vindictive, de Gaulle that Spears in the Middle East embodied British hypocrisy. Both were right. But it was the more tragic for Spears in that all his life he too had had 'une certaine lac de la France'.

De Gaulle in his own memoirs best sums up the conflict between two patriotisms that Spears had managed to turn to advantage in the First World War but which ruined hint in the Second.

II portait a la France, qu'il connaissait autant qu'un etranger puisse la connaftre, une sorte d'amour inquiet et dominateur. C'est pourquoi, en &pit de tout ce qu'il fit pour nous eider au depart, lc general Spears devait, un joUr se detourner de notre entreprise et se mettre la combattre. Dans la passion qu'il lui oppose, n'y eut-il pas le regret de n'avoir pu la conduire et la tristesse de 1,:o There s q n i t ee? rhetorical last question great truth a implied. Spears, like Frail` aevriuthatt 1h kenstein, had created a force he could not control. But, had he only been totally French, he would, I believe, himself have, become the leader of the Free French and aspired to that greatness which he certainlY desired and might well have achieved. 130t, as it was, like those Gascon barons of the Plantagenet era whom in many ways he s° resembled, he fell between two nations:. neither Churchillian enough to be admire° by the British nor Gaullist enough W be respected by the French.