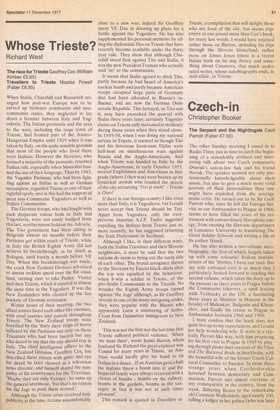 The race for Trieste Geoffrey Cox (William Kimber £5.95) Travellers to Trieste Nicolas Powell (Faber £6.95) When Stalin, Churchill and Roosevelt arranged how post-war Europe was to be carved up between communist and noncommunist states, they neglected to lay down a frontier' between Italy and Yugoslavia. The Istrian peninsula and the area to the west, including the large town of Trieste, had formed part of the AustroHungarian Empire until 1919 when it was taken by Italy, on the quite sensible grounds that most of the people who lived there were Italians, However the Slovenes, who formed a majority of the peasants, resented Italian rule, especially when Mussolini banned the use of their language. Thus by 1945, the Yugoslav Partisans, who had been fightting against an Italian as well as German occupation, regarded Trieste as one of their rightful spoils, and in this had the support of most non-Communist Yugoslays as well as Italian Communists.

The German troops, who had fought with such desperate valour both in Italy and Yugoslavia, were not easily budged from this last, northernmost hold on the Adriatic. The Tito goverment had been sitting in Belgrade almost six months before their Partisans got within reach of Trieste, while in Italy the British Eighth Army did not achieve its breakthrough, as far south as Bologna, until barely a month before VE Day. When this breakthrough was made, the crack New Zealand Division advanced at almost reckless speed over the flat coastland, turning east to take Padua, Venice and then Trieste, which it entered at almost the same time as the Yugoslays. It was the New Zealanders who cleared up the last pockets of German resistance.

Within hours of their meeting, the two allied armies faced each other like enemies, With rival sentries and patrols throughout Trieste. The New Zealand troops were horrified by the 'forty days' reign of terror inflicted by the Partisans not only on those Triestines who had been fascists but any Who dared to say that the city should stay in Italy. The chief intelligence officer to the New Zealand Division, Geoffrey Cox, has described these events with gusto and eye tor detail he later showed as a television news director, and himself shared the sympathy of his countrymen for the Triestines. 'Maybe they are only Eyeties', he sums up the general sentiment, 'but that's no reason tor the Jugs to push them around.'

Although the Trieste crisis received little Publicity at the time, it came uncomfortably close to a new war; indeed Sir Geoffrey spent VE Day in drawing up plans for a battle against the Yugoslays. He has also supplemented his personal memoirs by sifting the diplomatic files on Trieste that have recently become available under the thirty year rule. They show that although Churchill stood firm against Tito and Stalin, it was the new President Truman who actually said 'no' to the communists.

It' seems that Stalin agreed to ditch Tito, partly because he had heard of America's nuclear bomb and partly because American troops occupied large parts of Germany that had been allocated to Russia's influence, and are now the German Democratic Republic. This betrayal, as Tito saw it, may have provoked the quarrel with Stalin three years later; certainly Yugoslav claims on Trieste only increased in stridency during those years when they stood alone. In 1949-50, when I was doing my national service in Trieste, it seemed as though Tito and his ferocious lieutenant Djilas were hell-bent on simultaneous wars against Russia and the Anglo-Americans. And when Trieste was handed to Italy by the Anglo-Americans, in early October 1953, several Englishmen and Americans in Belgrade (where I then was) were beaten up by hysterical crowds who roamed the streets of the city screaming `Trst je 'lash!' —Trieste is Ours!

If there is one foreign country I like even more than Italy, it is Yugoslavia, but I could never accept that Trieste should be Trst. Apart from Yugoslays, only the everperverse historian A.J.P. Taylor suggested expelling the Italians from Trieste just as, more recently, he has suggested returning the Irish,Protestants to Scotland.

Although I like, in their different ways, both the ItalianTriestines and their Slovene neighbours, it must be said that the two nations do seem to bring out the nasty side of each other. The brutal arrogance shown to the Slovenes by Fascist black-shifts after the war was equalled by the behaviour, when I# was a soldier in Trieste, of the pro-Stalin Communists to the Titoists. No wonder the Eighth Army troops turned against 'the Jugs' although, as Sir Geoffrey reveals in one of the many intriguing asides, they were popular with the Maoris who apparently knew a smattering of SerboCroat from Dalmatian immigrants to New Zealand.

This was not the first nor the last time that Trieste suffered political violence. 'When we went there', wrote Isabel Burton, whose husband Sir Richard the great explorer was Consul for many years in Trieste, 'an Austrian would hardly give his hand to an Italian in a dance...lf an Austrian gave a ball the Italians threw a bomb into it: and the Imperial family were always received with a chorus of bombs — bombs on the railway, bombs in the gardens, bombs in the sausages: in fact it was not at such times pleasant'.

This remark is quoted in Travellers to Trieste, a compilation that will delight those who are fond of the city, but seems expensive at one pound more than Cox's book, for many less words. I would have enjoyed rather more on Burton, including his trips through the Slovene hinterland; rather more on James Joyce (there is a recent Italian book on his stay there); and something about Casanova, that much underrated writer, whose autobiography ends, in mid-affair, in Trieste.