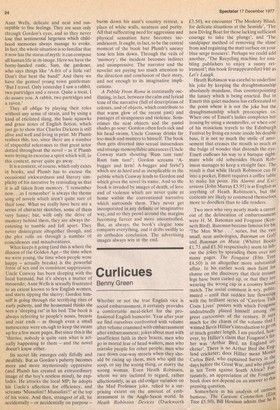 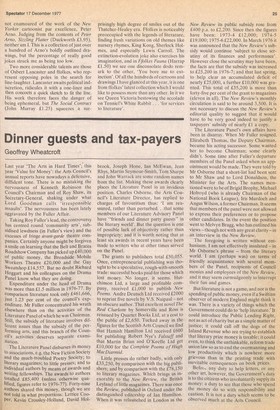 Whether or not the true English vice is social embarrassment, it certainly provides a comfortable meal-ticket for the professional English humorist. Year after year we find ourselves confronted with volume after volume crammed with embarrassment after embarrassment; jokes about men with insufficient faith in their 'braces, men who go in mortal fear of head waiters, men who mistake people for other people, men who race down one-way streets when they should be racing up them, men who spill the soup, or say the wrong thing, or marry the wrong woman. Even Heath Robinson, whom we are inclined to regard, rather affectionately, as an old-codger variation on the Mad Professor joke, relied to a surprising extent on the amount of embarrassment in the Anglo-Saxon world. In Heath Robinson Devices (Duckworth £3.50), we encounter 'The Modesty Blind, for delicate situations at the Seaside', 'The new Diving Boat for those lacking sufficient courage to take the plunge', and 'The sandpaper method of removing the shine from and regaining the matt surface on your blue serge trousers!. Perhaps we could add another, 'The Recycling machine for enabling publishers to enjoy a sunny retirement' this book firseeppearedinl 940 as Let's Laugh.

Heath Robinson was careful to underline his joke by keeping the draughtsmanship absolutely mundane, thus counterpointing the lunacy which is being enacted. But in Emett this quiet madness has exfloreated to the point where it is not the joke but the draughtsmanship which preoccupies us. When one of Emett's ladies completes her ironing by using a steamroller, or when one of his musicians travels to the Edinburgh Festival by living en route inside his double bass, it is not so much the smile of amusement that creases the mouth so much as the bulge of wonder that distends the eye. Emett curlicues his way to a baroque nightmare while old sobersides Heath Robinson manages to keep a straight face. The result is that while Heath Robinson can fit into a pocket, Emett requires a coffee table to make his point. His Alarm's and Excursions (John Murray £3.95) is as English as anything of Heath Robinson's, but the contents are likely to commend themselves more to doodlers than to idle readers.

Two men who very nearly made a career out of the delineation of embarrassment were H. M. Bateman and Fougasse (Kenneth Bird). Bateman became famous for his 'The Man Who . .' series, but the two small, neat anthologies, Bateman on Golf and Bateman on Music (Whittet Books £1.75 and £1.50 respectively) seem to lab' our the jokes by spreading them over too many pages. The Fougasse (Elm Tree £4.50) is an altogether more substantial affair. In his earlier work men faint for shame on the discovery that their trouser legs have been curled up, or that they are wearing the wrong cap in a country house match. The social comment is wry, polite, muted — until that sudden late flowerieg with the brilliant series of 'Careless Talk Costs Lives' posters with which Fougasse undoubtedly placed himself among the great cartoonists of the century. Jt saY5 much for the charm of the volume that I wanted Bevis Hillier's introduction to go °II at much greater length. I am puzzled, how' ever, by Hillier's claim that Fougasse's fat' her was 'Arthur Bird, an England Cricketer'. There is no Arthur Bird the England cricketer; does Hillier mean Moriee Carlos Bird, who captained Surrey in the days before the Great War, and who playa' in ten Tests against South Africa? Fortunately, an appreciation of the FougasSe book does not depend on an answer to this pressing question. Somewhere in his analysis of cartoon humour, The Cartoon Connection (Or, Tree £5.50), Bill Hewison admits that he not enamoured of the work of the New Yorker cartoonist par excellence, Peter Arno. Judging from the contents of Peter Arno, Sizzling Platter (Duckworth £3.95), neither am 1. This is a collection of just over a hundred of Arno's boldly outlined drawings, but the percentage of really good jokes struck me as being too low.

Two more considerable talents are those of Osbert Lancaster and ffolkes, who represent opposing poles in the search for line-laughter. Lancaster awaits political indiscretion, ridicules it with a one-liner and then concocts a quick sketch to fit the line. His work therefore faces the danger of being ephemeral, but The Social Contract (John Murray £1.25) squeezes a sur prisingly high degree of smiles out of the Thatcher-Healey era. Ffolkes is noticeably preoccupied with the legends of literature, finding fresh variations on old themes like nursery rhymes, King Kong, Sherlock Holmes, and especially Lewis Carroll. The extinction-evolution joke also exercises his imagination, and in Ffolkes Fauna (Harrap £1.50) we see one disconsolate dodo remark to the other, 'You bore me to extinction'. Of all the hundreds of cartoons and drawings I have glanced at this year, it is one from ffolkes' latest collection which I would like to possess more than any other. In it we see Queen Victoria bestowing the accolade on Tenniel's White Rabbit . . . 'for services to literature'.