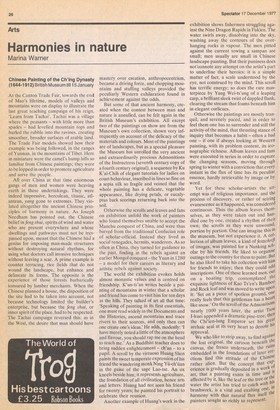 At the Canton Trade Fair, towards the end of Mao's lifetime, models of valleys and mountains were on display to illustrate the last great teaching campaign of his reign, 'Learn from Tachai'. Tachai was a village where the peasants — with little more than spades — had levelled mountain tops and hurled the rubble into the ravines, creating smoother, broader surfaces of arable land. The Trade Fair models showed how their example was being followed, in the ranges of Yunnan, in the mountains of Tibet. Here in miniature were the camel's hump hills so familiar from Chinese paintings; they were to be lopped in order to promote agriculture and serve the people.

All over China at that time enormous gangs of men and women were heaving earth in these undertakings. They were indeed impressive, herculean, titanic, atlantean, yang gone to extremes. They violated altogether the ancient Chinese principles of harmony in nature. As Joseph Needham has pointed out, the Chinese belief in feng shui, spirits of wind and water who are present everywhere and whose dwellings and pathways must not be trespassed upon, meant that the Chinese had a genius for imposing man-made structures without destroying natural rhythms, for using what doctors call invasive techniques without leaving a scar. A prime example is counter terracing, rice fields that do not wound the landscape, but enhance and delineate its forms. The opposite is the experience of those forests barbaric:ally tonsured by lumber merchants. When the Chinese planned a house, the disposition of the site had to be taken into account, not because technology limited the builder's enterprise, but because the feng shui, or inner spirit of the place, had to be respected. The Tachai campaign reversed this: as in the West, the desire that man should have mastery over creation, anthropocentrism, became a driving force, and chopping mountains and stuffing valleys provided the peculiarly Western exhilaration found in achievement against the odds.

But some of that ancient harmony, created when the contest between man and nature is annulled, can be felt again in the British Museum's exhibition. All except two of the paintings on show are from the Museum's own collection, shown very infrequently on account of the delicacy of the materials and colours. Most of the paintings are of landscapes, but as a special pleasure the Museum has unrolled the very ancient and extraordinarily precious Admonitions of the Instructress (seventh century copy of a fourth century original), a sequence by Ku K'ai-Chih of elegant tutorials for ladies on court behaviour, inscribed in lines so fine on a sepia silk so fragile and veined that the whole painting has a delicate, vegetable appearance, like drying petals, or eucalyptus bark scorings returning back into the soil.

Otherwise the scrolls and leaves and fans on exhibition unfold the work of painters who found themselves unable to accept the Manchu conquest of China, and were thus barred from the traditional Confucian role of scholar-official. Instead they lived as social renegades, hermits, wanderers. As so often in China, they turned for guidance to the past, finding in the rebels against an earlier Mongol conquest—the Yuan in 1280 — a model for their careers as literary and artistic rebels against society.

The world the exhibition evokes holds almost monastic values and is centred on friendship. K'un-ts'an writes beside a painting of mountains in winter that a scholar and friend has come to visit him for ten days in the hills. They talked of art all that time: 'Speaking of painting in its first essentials, one must read widely in the Documents and the Histories, ascend mountains and trace rivers to their sources, and only then can one create one's ideas.' He adds, modestly: 'I have merely noted a little of the atmosphere and flavour, you should rap me on the head to teach me.' As a Buddhist teacher does to bring sudden enlightenment — ch'an — to a pupil. A scroll by the virtuoso Huang Shen paints the sweet temperate expression of his friend the wandering monk Ning Yii-ch'ilan in the guise of the sage Lao-tse. An ox kneels beside him; it represents agriculture, the foundation of all civilisation, hence arts and letters. Huang had not seen his friend for twenty years; he painted his portrait to celebrate their reunion.

Another example of Huang's work in the exhibition shows fishermen struggling against the Nine Dragon Rapids in Fukien. The water swirls away, dissolving into the sky, washing away the contours of the overhanging rocks in vapour. The men pitted against the current towing a sampan are small; men usually are small in Chinese landscape painting. But their puniness does not-connote any attempt on the artist's part to underline their heroics: it is a simple matter of fact, a scale understood by the eye, not construed by the mind. This scroll has terrific energy; so does the rare masterpiece by Yang Wei-ts'ung of a leaping carp, a brilliant sleek twist of dappled flank, clearing the stream that foams beneath him in ,elegant curlicues.

Otherwise the paintings are mostly tranquil, and serenely paced, and in order to feel them one has to surrender and still the activity of the mind, that thrusting stance of inquiry that becomes a habit — often a bad one — if one if always looking at Western painting, with its problem content, its iconographic richness. Album leaves and fans were executed in series in order to capture the changing seasons, moving through spring to winter with a conviction that every instant in the flux of time has its peculiar essence, hardly retrievable by image or by word.

Yet for these scholar-artists the attenapt was of religious importance, and the process of discovery, or rather of seizing evanescence as it happened, was considered continuous. Thus the album leaves themselves, as they were taken out and handled one by one, created a rhythm of their own; the scrolls as they were unwound, portion by portion. One can imagine this in the museum, but not experience it. A collection of album leaves, a kind of festschrift of images, was painted for a Nanking scholar by his friends. He liked to organise outings to the country for them to paint. But he also liked to take his collection with him for friends to enjoy; then they could add inscriptions. One of these learned men, nut on a boating trip, contemplated tile exquisite lightness of Kao Ts'en's Bantb°° and Rock leaf and was moved to write 009 it: 'Set on a piece of spotless ground, une really feels that this gentleman has a heart like snow.' On the scroll of the Admonitions nearly 1000 years later, the artist Ts° I-kuei appended a dramatic pine-tree; ther! the ChNen-lung Emperor set his gred:' archaic seal at its very heart to denote his approval. We who like to strip away, to find against the lost original, the cartoon beneath the canvas, the fresco underneath, the ruins embedded in the foundations of later ere" ctions find this attitude of the Chinese rather alien. But the concept that exl); erience is gradually deposited in a work art, that a painting exists in time and I, affected by it, like the leaf or the tree or water the artist has tried to catch with 11,1115 brushwork, is a vital and exalting one, harmony with that natural flux itself Ow painters sought so richly to represent.