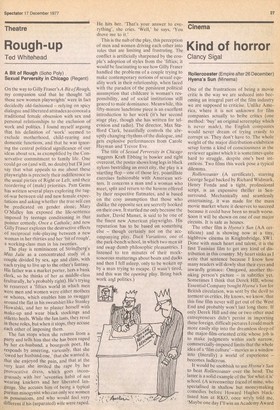 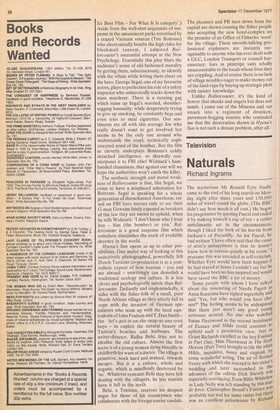 Rollercoaster (Empire after 26 December) Hyena's Sun (Minema) One of the frustrations of being a movie critic is the way we are seduced into becoming an integral part of the film industry we are supposed to criticise. Unlike America, where it is not unknown for film• companies actually to bribe critics (one method: 'buy' an original screenplay which is never made), the English companies would never dream of trying crassly to corrupt us. They don't have to. The whole weight of the major distribution-exhibition setup forms a kind of consciousness in the reviewer against which it is sometimes quite, hard to struggle, despite one's best intentions. Two films this week pose a typical dilemma.

Rollercoaster (A certificate), starring George Segal backed by Richard Widmark, Henry Fonda and a tight, professional script, is an expensive thriller in Sensurround. Mechanically and seamlessly entertaining, it was made for the Mass movie market where it deserves' to succeed because it could have been so much worse. Soon it will be shown on one of our major circuits. It is safe as houses.

The other film is Hyena's Sun (AA certificate) and is showing now at a tiny, highbrow cinema in Knightsbridge, SW I. Done with much heart and talent, it is the first Tunisian film to get any kind of distribution in this country. My heart sinks as I write that sentence because I know how many readers will slowly shut their eyes and inwardly grimace: Omigawd, another thinking person's picture — in subtitles yet. Sometimes I think that Derek Hill, whose Essential Company bought Hyena's Sun for British circulation, was sent by the devil to torment us critics. He knows, we know, that this fine film never will get out of the West End 4iu.1 probably won't last long there. If only Derek Hill and .6ne or two other mad entrepreneurs didn't persist in importing these foreign, difficult pictures I could much more easily slip into the dreamless sleep of the major-film-oriented critic whose job is to make judgments within such narrow, commercially-imposed limits that the whole idea of a 'film culture'— movies as a window into (literally) a world of experience — becomes ludicrous, It would be snobbish to use Hyena's Sun to beat Rollercoaster over the head. The latter is a solid example of the 'for what it is' school. (A screenwriter friend of mint.% who specialised in shallow but moneymaking comedies before Howard Hughes blacklisted him at RKO, once wryly told me, 'Maybe one day I'll win an Academy Award for Best Film For What It Is category'.) Aside from the well-shot sequences of suspense in the amusement parks terrorised by a crazed Vietnam veteran (Tim Bottoms) who electronically bombs the high rides for blackmail ransom, I admired Rollercoaster's successful attempt at the New Psychology. Essentially this ploy blurs the audience's sense of old-fashioned morality by getting them, subconsciously, to identify with the villain while letting them cheer on the hero. George Segal, one of my favourite actors, plays to perfection his role of a safety inspector who unheroically tracks down the mass murderer. There is a running gag which sums up Segal's worried, shouldersagging humanity: while desperately trying to give up smoking, he constantly begs and even tries to steal cigarettes. Our sentiments are all with this average Joe who really doesn't want to get involved but seems to be the only one around who understands the cruel, technically sophisticated mind of the bomber. But the film so cleverly underplays Bottoms's coldly detached intelligence, so shrewdly counterposes it to FBI chief Widmark's hamhanded clumsiness, that against our will we hope the authorities won't catch the killer.

The aesthetic strength and moral weakness of Rollercoaster is that, like Segal, we come to have a misplaced admiration for Bottoms. Segal is speaking for a whole generation of disenchanted Americans, raised on FBI hero movies only to see their G-man Gawains lately exposed as breakers of the law they are sworn to uphold, when he tells Widmark: 'I don't know who I trust less him (the bomber) or you,' Rollercoaster is a good suspense film which somehow diminishes the stock of available decency in the world.

Hyena's Sun opens us up to other possibilities. One useful way of looking at this seductively photographed, powerfully felt Dutch-Tunisian co-production is as a journalistic exposé of how tourism you and me abroad unwittingly can demolish a traditional ecology and culture. It is less clever and psychologically subtle than Rollercoaster. Defiantly and singlemindedly, it sides with the fisher-folk of a small, poor North African village as they utterly fail to cope with the invasion of German speculators who team up with the local equivalents of John Poulson and T. Dan Smith-. the let's-put-it-on-the-map-at-any-cost boys to exploit the natural beauty of Tunisia's beaches and harbours. The writer-director, Ridha Behi, tries not to idealise the old culture. Almost the first scene is of a young woman dying bloodily in childbirth for want of a doctor. The village is primitive, work hard and manual, rewards meagre. But it is a culture, whole and organic, which is mindlessly destroyed by 'us'. Whatever restraint Behi may have felt dealing with the villagers, he lets tourists have it full in the teeth.

Behi, a Tunisian, reserves his deepest anger for those of his countrymen who collaborate with the foreign tourist vandals. The planners and PR men down from the capital are shown conning the fisher people into accepting the new hotel-complex on the promise of an Office of Fisheries 'soon' for the village. These smooth-talking professional explainers are instantly recognisable to anyone who has ever dealt with a GLC, London Transport or council bureaucracy: liars in pinstripe suits wholly unaccountable to the locals whose lives they are crippling. And of course there is no lack of village notables eager to make money out of the land-rape by buying up strategic plots with insider knowledge.

Unlike Rollercoaster, it's the kind of horror that shocks and angers but does not numb. I came out of the Minema and ran smack into a regiment of drunken, pavement-hogging tourists who reminded me that the desecration shown in Hyena's Sun is not such a distant problem, after all.