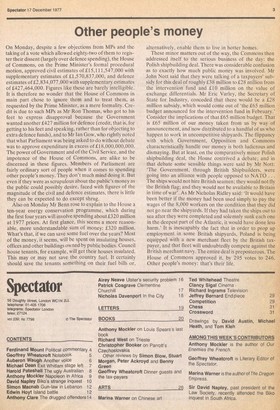 On Monday, despite a few objections from MPs and the taking of a vote which allowed eighty-two of them to register their dissent (largely over defence spending), the House of Commons, on the Prime Minister's formal procedural motion, approved civil estimates of £15,111,547,000 with supplementary estimates of £1,570,837,000, and defence estimates of £2,834,077,000 with supplementary estimates of L427,464,000. Figures like these are barely intelligible. It is therefore no wonder that the House of Commons in main part chose to ignore them and to treat them, as requested by the Prime Minister, as a mere formality. Credit is due to such MPs as Mr Ron Thomas, who got to his feet to express disapproval because the Government wanted another £427 million for defence (credit, that is, for getting to his feet and speaking, rather than for objecting to extra defence funds), and to Mr Ian Gow, who rightly noted that what Parliament was being asked to do without debate was to approve expenditure in excess of £18,000,000,000. The power of Government and of the Civil Service, and the impotence of the House of Commons, are alike to be discerned in these figures. Members of Parliament are fairly ordinary sort of people when it comes to spending other people's money. They don't much mind doing it. But even if they were as scrupulous about the public's money as the public could possibly desire, faced with figures of the magnitude of the civil and defence estimates, there is little they can be expected to do except shrug.

Also on Monday Mr Benn rose to explain to the House a ten-year energy conservation programme, which during the first four years will involve spending about £320 million at 1977 prices. At first glance, this seems a more reasonable, more understandable sum of money: £320 million. What's that, if we can save some fuel over the years? Most of the money, it seems, will be spent on insulating houses, offices and other buildings owned by public bodies. Council house tenants, for example, will get their houses insulated. This may or may not save the country fuel. It certainly should save the tenants something on their fuel bills or, alternatively, enable them to live in hotter homes.

These minor matters out of the way, the Commons then addressed itself to the serious business of the day: the Polish shipbuilding deal. There was considerable confusion as to exactly how much public money was involved. Mr John Nott said that they were talking of a taxpayers' subsidy for this deal of roughly £38 million to £28 million from the intervention fund and £10 million on the value of exchange differentials. Mr Eric Varley, the Secretary of State for Industry, conceded that there would be a £28 million subsidy, which would come out of 'the £65 million budget announced for the intervention fund in February.' Consider the implications of that £65 million budget. That is £65 million of our money taken from us by way of announcement, and'now distributed to a handful of us who happen to work in uncompetitive shipyards. The flippancy with which Government, Opposition and Commons characteristically handle our money is both ludicrous and dismaying. But at least, on the comparatively minor Polish shipbuilding deal, the House contrived a debate; and in that debate some sensible things were said by Mr Nott: The Government, through British Shipbuilders, were going into an alliance with people opposed to NATO . . . The ships would not hire British seamen; they would not fly the British flag; and they would not be available to Britain in time of war'. As Mr Nicholas Ridley said: 'It would have been better if the money had been used simply to pay the wages of the 8,000 workers on the condition that they did not go near the shipyards. If they had taken the ships out to sea after they were completed and solemnly sunk each one in the deepest part of the Atlantic, it would have done less harm.' It is inescapably the fact that in order to prop up employment in some British shipyards, Poland is being equipped with a new merchant fleet by the British taxpayer, and that fleet will undoubtedly compete against the British merchant navy. The entire deal is preposterous. The House of Commons approved it, by 295 votes to 246. Other people's money: that's their life.