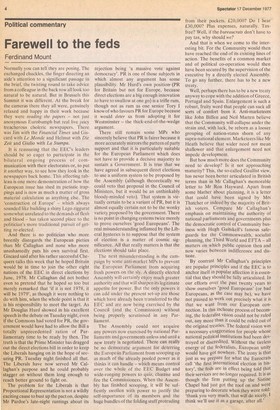 Farewell to the feds

Normally you can tell they are posing. The exchanged chuckles, the finger directing an aide's attention to a significant passage in the brief, the twisting round to take advice from a colleague in the back row all look too natural to be natural. But in Brussels this Summit it was different. At the break for the cameras there they all were, genuinely relaxed and happy in their work because they were reading the papers — not just anonymous :Eurobumph but real live juicy treacherous choleric newspapers. There was Jim with the Financial Times and Giscard with Le Monde and Helmut with Die Zeit and Giulio with La Stampa.

It is reassuring that the EEC's leaders should be so eager to participate in the bilateral ongoing process of communication with their electorates or, to put it another way, to see how they look in the newspapers back home. This affecting tableau is one more demonstration of how the European issue has shed its pietistic trappings and is now as much a matter of gross material calculation as anything else. The 'construction of Europe' — which always sounded like building a shiny Lego ziggurat somewhat unrelated to the demands of flesh and blood — has taken second place to the politician's more traditional pursuit of get.; ting re-elected.

And there is no politician who more breezily disregards the European pieties than Mr Callaghan and none who more unashamedly puts his own survival first. Giscard said after his rather successful Chequers talks this week that he hoped Britain would be in time to join the other eight nations of the EEC in direct elections by June, 1978. Mr Callaghan did not bother even to pretend that he hoped so too but merely remarked that 'if it is not 1978, it will be 1979', as though it were nothing to do with him, when the whole point is that it is his responsibility to meet the target. As Mr Douglas Hurd showed in his excellent speech in the debate on Tuesday night, even if the Commons had voted for PR, the government would have had to allow the Bill a totally unprecedented ration of Parliamentary time to be ready by then. The truth is that the Prime Minister has dragged out the direct elections bill in order to keep the Liberals hanging on in the hope of securing PR. Tuesday night finished all that. The Liberals have now served Mr Callaghan's purpose and he could probably stagger on without them long enough to reach better ground to fight on.

The problem for the Liberals is that Proportional Representation is not a wildly exciting cause to bust up the pact on, despite Mr Pardoe's late-night rantings about its rejection being 'a massive vote against democracy'. PR is one of those subjects in which almost any argument has some plausibility. Mr Hurd's own position(PR for Britain but not for Europe, because direct elections are a big enough innovation to have to swallow at one go) is a trifle rum, though not as rum as one senior Tory knowof who favours PR for Europe because it would deter us from adopting it for Westminster — the thick-end-of-the-wedge argument.

There still remain some MPs who sincerely believe that PR is fairer because it more accurately mirrors the pattern of party support and that it is particularly suitable for the European Parliament which does not have to provide a decisive majority to sustain a Government. It is true that we have agreed in subsequent direct elections to use a uniform system to be proposed by the Assembly (although theoretically we could veto that proposal in the Council of Ministers, but it would be an unthinkably bloody-minded veto). That system is virtually certain to be a variant of PR, but it is almost equally certain not to be the wonky variety proposed by the government. There is no point in changing systems twice merely to prove ourselves 'good Europeans'. The real misunderstanding inflamed by the Liberal hysterics is to suppose that the system of election is a matter of cosmic significance. All that really matters is that the elections should take place.

The next misunderstanding is the campaign by some anti-market MPs to prevent the European Parliament from acquiring fresh powers on the sly. A directly elected Assembly will certainly enjoy much greater authority and that will sharpen its legitimate appetite for power. But the only powers it can add under the present set-up are those which have already been transferred to the EEC and are now being exercised by the Council (and the Commission) without being properly scrutinised in any Parliament.

The Assembly could not acquire any powers now exercised by national Parliaments and governments unless and until a new treaty is negotiated. There can really be no democratic argument for deterring the European Parliament from scooping up as much of the already pooled power as it thinks it can handle — which means control over the whole of the EEC Budget and wide-ranging powers to quiz, chastise and fire the Commissioners. When the Assembly has finished scooping, it will be suffiently swollen with power to justify the self-importance of its members and the huge bundles of the folding stuff protruding from their pockets. £20,000? Do I hear £30,000? Plus expenses, naturally. Taxfree? Well, if the bureaucrats don't have to pay tax, why should we?

And that is when we come to the interesting bit. For the Community would 'then have reached the end of its existing lines of action. The benefits of a common market and of political co-operation would then have been secured by the supervision of the executive by a directly elected Assembly. To go any further, there has to be a new treaty.

Well, perhaps there has to be a new treaty anyway to cope with the addition of Greece, Portugal and Spain. Enlargement is such a robust, fruity word that people can suck all sorts of comfort from it. Anti-marketeers like John Biffen and Neil Marten believe that the Community will collapse under the strain and, with luck, be reborn as a looser grouping of nation-states shorn of any supra-national element. Marketeers like Mr Heath believe that wider need not mean shallower and that enlargement need not impede development.

But how much more does the Community need to develop? Is it not approaching maturity? This, the so-called Gaullist view, has never been better articulated in British terms than in Mr Callaghan's memorable letter to Mr Ron Hayward. Apart from some blather about planning, it is a letter that could have been signed by Mrs Thatcher or indeed by the majority of British voters. Compare Mr Callaghan's emphasis on maintaining the authority of national parliaments and governments plus the democratic control of Community business with Hugh Gaitskell's famous safeguards for the Commonwealth, socialist planning, the Third World and EFTA — all matters on which public opinion then and now varies between indifference and distaste.

By contrast Mr Callaghan's principles are popular principles and if the EEC is to anchor itself in popular affection it is essential that they should be fully articulated. In our efforts over the past twenty years to show ourselves 'good Europeans' (or bad Europeans, as the case may be), we have not paused to work out precisely what it is that we want from our European connection. In this inchoate process of becoming, the federalist vision could not be ruled out, any more than it could be ruled out of the original treaties. The federal vision was a necessary exaggeration for people whose national political institutions had been destroyed or discredited. Without the tireless energy of the federalists, European unity would have got nowhere. The irony is that just HS we prepare for what the Eurocrats call 'the first international election in history', the feds are in effect being told that their services are no longer required. It is as though the firm putting up the Sistine Chapel had just got the roof on and were preparing to decorate when they were told: 'thank you very much, that will do nicely, think we'll use it as a garage, after all.'