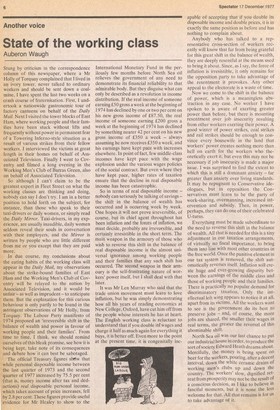 State of the working class

Stung by criticism in the correspondence column of this newspaper, where a Mr Holly of Torquay complained that I lived in an ivory tower, never talked to ordinary workers and should be sent down a coalmine, I have spent the last two weeks on a crash course of fraternisation. First, I undertook a nationwide gastronomic tour of factory canteens on behalf of the Daily Mail, Next I visited the tower blocks of East Ham, where working people and their families have been stuck without lifts and frequently without power in permanent fear of a Towering Inferno-style situation as a result of various strikes from their fellow workers. I interviewed the victims at great length in their homes on behalf of Associated Television. Finally I went to Coventry and filmed a long evening in the Working Men's Club of Barras Green, also on behalf of Associated Television.

So although I can't claim to be the greatest expert in Fleet Street on what the working classes are thinking and doing, nobody can say I don't try. I am in a better position to hold forth on the subject, for instance, than those who speak to their taxi-drivers or daily women, or simply read the Daily Mirror. Taxi-drivers, in my experience, are usually inaudible, daily women seldom reveal their souls in conversation with their employers, and the Mirror is written by people who are little different from me or you except that they are paid more.

In due course, my conclusions about the eating habits of the working class will appear in the Daily Mail, my observations about the strike-bound families of East Ham and the Working Men's Club of Coventry will be relayed to the nation by Associated Television, and it would be unfair — as well as imprudent — to anticipate them. But the explanation for this curious behaviour is only partly to be found in the astringent observations of Mr Holly, from Torquay, The Labour Party manifesto of 1974 proposed an 'irreversible shift in the balance of wealth and power in favour of working people and their families'. From time to time, I think, we should remind ourselves of this bleak promise, see how it is being kept, take note of its consequences and debate how it can best be sabotaged.

So in terms of real disposable income — nobody can seriously be talking of savings — the shift in the balance of wealth has occurred and is occurring week by week. One hopes it will not prove irreversible, of course, but its chief agent throughout has been inflation and the forces of inflation, we must decide, probably are irreversible, and certainly irresistible in the short term. The main weapon in the armoury of those who wish to reverse this shift in the balance of real disposable income is the almost universal ignorance among working people and their families that any such shift has occurred. The second weapon in their armoury is the self-frustrating nature of workers' power itself, but I shall deal with that later.

It was Mr Len Murray who said that the trade union movement must learn to love inflation, but he was simply demonstrating how all his years of reading economics at New College, Oxford, have cut him off from the people whose interests he has at heart. The English working class is reluctant to understand that if you double it wages and charge it half as much again for everything it buys, it is better off. Even more to the point at the present time, it is congenitally inc apable of accepting that if you double its disposable income and double prices, it is in exactly the same position as before and has nothing to complain about.

Anybody who has talked to a representative cross-section of workers recently will know that far from being grateful for this great shift in the balance'of wealth, they are deeply resentful at the means used to bring it about. Since, as I say, the force of inflation is irresistible, it only remains for the opposition party to take advantage of the resentment it provokes. Any other appeal to the electorate is a waste of time.

Now we come to the shift in the balance of power, which is a meaningless abstraction in any case. No worker I have spoken to is aware of exerting greater power than before, but there is mounting resentment over job insecurity resulting from other workers exerting their power. A good winter of power strikes, coal strikes and rail strikes should be enough to convince every housewife in the land that workers' power creates nothing more than hell on earth for the workers who theoretically exert it, but even this may not be necessary if job insecurity is made a major issue. I was surprised to find the extent to which this is still a dominant anxiety — far greater than anxiety over living standards. It may be .repugnant to Conservative ideologues, but in opposition the Conservatives must learn to be the party of work-sharing, overmanning, increased intervention and subsidy. Then, in ,power, perhaps, they can do one of their celebrated U-turns.

Everything must be made subordinate to the need to reverse this shift in the balance of wealth. All that is needed for this is a tiny adjustment in our taxation arrangements, of virtually no fiscal importance, to bring them into line with most other countries in the free world. Once the punitive element in our tax system is removed, the shift automatically reverses itself. Inflation will create huge and .ever-growing disparity between the earnings of the middle class and those of working people and their families. There is practically no popular demand for discriminatory taxation. Only the intellectual left wing appears to notice it at all, apart from its v‘ictuns. All the workers want to see is the government do its best to preserve jobs — and, of course, the more jobs are shared, the smaller their wages in real terms, the greater the reversal of this abominable shift.

North Sea oil was our last chance to put our industrial house in order, to produce the sort of society Edward Heath dreams about, Mercifully, the money is being spent on beer for the workers, pouring, after a decent interval, down the white ceramic drains of working men's clubs up and down the country. The workers' slow, dignified retreat from prosperity may not be the result of a conscious decision, as I like to believe in fanciful moments, but it is none the less ' welcome for that. All that remains is for us to take advantage of it.