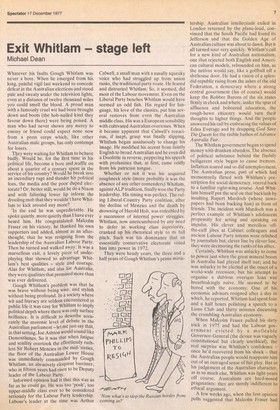 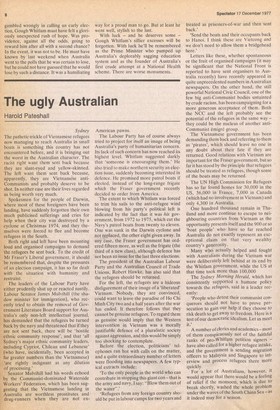 Whatever his faults Gough Whitlam was never a bore. When he emerged from his long, painful vigil last weekend to concede defeat in the Australian elections and stood pale and sweaty under the television lights, even at a distance of twelve thousand miles you could smell the blood. A proud man with a famously cruel wit had been brought down and boots (the hob-nailed kind they favour down there) were being poised. A man who had never shown any mercy to enemy or friend could expect none now from a press corps which, like other Australian male groups, has only contempt for losers.

T1ley were waiting for Whitlam to behave badly. Would he, for the first time in his political life, become a bore and .waffle on about a quarter of a century spent in the service of his country? Would he break into an incendiary rage and slander his political foes, the media and the poor duped electorate? Or, better still, would he do a Nixon and with faltering lower lip inform the drooling mob that they wouldn't have Whitlam to kick around any more? In the end he was unpredictable. He spoke quietly, more quietly than I have ever heard him. He congratulated Malcolm Fraser on his victory, he thanked his own supporters and added, almost as an afterthought, that he was resigning from the leadership of the Australian Labour Party. Then he turned and walked away. It was a marvellous exit, a lovely piece of underplaying that showed to advantage Whitlam's best qualities — style and courage. Alas for Whitlam, and alas for Australia, they were qualities that promised more than was ever delivered.

Gough Whitlam's problem was that he was brave without being wise, and stylish without being profound. In a society where wit and literacy are seldom encountered in public life it was easy for Whitlam to imply political depth where there was only surface brilliance. It is difficult to describe accurately the moronic level of debate in the Australian parliament — let me just say that, in that setting, Joe Ashton would sound like Demosthenes. So it was that when fatigue and senility overtook the effortlessly ruthless Sir Robert Menzies in the mid-'sixties, the floor of the Australian Lower House was immediately commanded by Gough Whitlam, an abrasively eloquent barrister, who in fifteen years had risen to be Deputy leader of the Labour Party.

Informed opinion had it that this was as far as he could go. He was too 'posh', too upper-middle class ever to be considered seriously for the Labour Party leadership, Labour's leader at the time was Arthur Calwell, a small man with a nasally squeaky voice who had struggled up from union ranks, the traditional party route. He feared and distrusted Whitlam. So, it seemed, did most of the Labour movement. Even on the Liberal Party benches Whitlam would have seemed an odd fish. His regard for language, his love of the classics, put him several removes from even the Australian middle class. His was a European sensibility with cultivated Australian overtones. When it became apparent that Calwell's tenacious, if inept, grasp was finally slipping, Whitlam began assiduously to change his image. He modified his accent from faintly English to broad Australian and he even did a Doolittle in reverse, peppering his speech with profanities that, at first, came oddly from his patrician tongue.

Whether or not it was his acquired roughneck style (more probably it was the absence of any other contenders) Whitlam, against ALP tradition, finally won the Party leadership. His timing was perfect. The ruling Liberal-Country Party coalition, after the decline of Menzies and the death by drowning of Harold Holt, was enfeebled by a succession of internal power struggles. Whitlam, now unencumbered by any need to defer to working class superiority, cranked up his rhetorical style to its full pitch. Such was his dominance that an essentially conservative electorate voted him into power in 1972.

They were heady years, the three and a half years of Gough Whitlam's prime minis tership. Australian intellectuals exiled in London returned by the plane-load, convinced that the South Pacific had found its Jefferson and that the Golden Age of Australian culture was about to dawn. But it all turned sour very quickly. Whitlam's call for a new kind of Australian nationalism, one that rejected both English and American cultural models, rebounded on him, as the natives would say, like a golfball off a shithouse door. He had a vision of a splendid republic rising from the ashes of the old Federation, a democracy where a strong central government (his of course) would keep the Robber Barons of the six states firmly in check and where, under the spur of affluence and bolstered education, the rough-hewn citizenry would turn their thoughts to higher things. And the people answered his call by embracing the values of Edna Everage and by dropping God Save The Queen for the risible bathos of Advance Australia Fair.

The Whitlam government began to spend money with drunken abandon. The absence of political substance behind the flashily belligerent style began to cause tremors. Inflation soared and so did unemployment. The Australian press, part of which had momentarily flirted with Whitlam's prescription for social democracy, veered back to a familiar right-wing course. And Whitlam himself put the seal on that backlash by insulting Rupert Murdoch (whose newspapers had been backing him) in front of friends. The incident with Murdoch was a perfect example of Whitlam's adolescent propensity for acting and speaking on impulse. His clever and merciless offthe-cuff jibes at Cabinet colleagues and ancient Labour Party totems were relished by journalists but, clever line by clever line, they were decimating the ranks of his allies.

Certainly, Whitlam was unlucky to come to power just when the great mineral boom in Australia had played itself out; and he was unlucky to be elected at the onset of a world-wide recession, but his attempt to organise a dubious overseas loan was breathtakingly naive. He seemed to be bored with the economy. One of his economic advisors, resigned after a day in which, he reported, Whitlam had spent four and a half hours polishing a speech to a Lions Club and thirty minutes discussing the crumbling Australian economy.

When Malcolm Fraser pulled his dirty trick in 1975 and had the Labour government evicted by a malleable Governor-General (the device was vaguely constitutional but clearly unethical), the real surprise was Whitlam's confidence — once he'd recovered from his shock — that the Australian people would reappoint him out of an outraged sense of fair play. But in his judgement of the Australian character, as in so much else, Whitiam was light-years off course. Australians are hard-nosed pragmatists: they are stonily indifferent to ethical argument.

A few weeks ago, when the first opinion polls suggested that Malcolm Fraser had gambled wrongly in calling an early election, Gough Whitlam must have felt a gloriously unexpected rush of hope. Was providence, against all the odds, going to reward him after all with a second chance? In the event, it was not to be. He must have known by last weekend when Australia went to the polls that he was certain to lose, but he could not have guessed that he would lose by such &distance. It was a humiliating way for a proud man to go. But at least he went well, stylish to the last.

With luck — and he deserves some — Gough Whitlam's sillier excesses will be forgotten. With luck he'll be remembered as the Prime Minister who pumped up Australia's deplorably sagging education system and as the founder of Australia's first crude attempt at a National Health scheme. There are worse monuments.