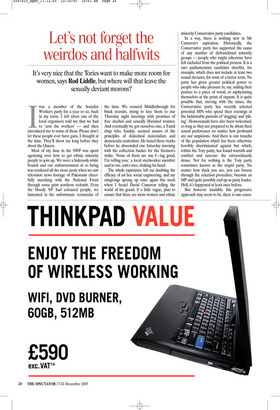 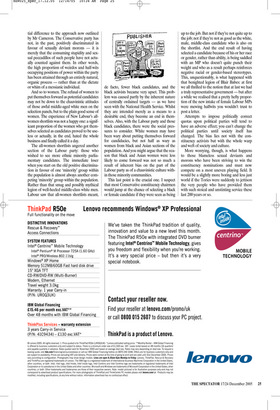 Let’s not forget the weirdos and halfwits

It’s very nice that the Tories want to make more room for women, says Rod Liddle, but where will that leave the sexually deviant morons?

Iwas a member of the Socialist Workers party for a year or so, back in my teens. I left when one of the local organisers told me that we had to ‘arm the workers’ — and then introduced me to some of them. Please don’t let these people ever have guns, I thought at the time. They’ll shoot me long before they shoot the Queen.

Most of my time in the SWP was spent agonising over how to get ethnic minority people to join up. We were a hideously white branch and our embarrassment at so being was rendered all the more acute when we saw television news footage of Pakistanis cheerfully marching with the National Front through some grim northern redoubt. Even the bloody NF had coloured people, we lamented in the unfortunate vernacular of the time. We scoured Middlesbrough for black recruits, trying to lure them to our Thursday night meetings with promises of free alcohol and sexually liberated women. And eventually we got ourselves one, a Tamil chap who, frankly, seemed unsure of the principles of dialectical materialism and democratic centralism. He lasted three weeks before he absconded one Saturday morning with the collection bucket for the firemen’s strike. ‘None of them are any f—ing good, I’m telling you,’ a local steelworker member said to me, sotto voce, shaking his head.

The whole experience left me doubting the efficacy of ad hoc social engineering, and my misgivings sprung up once again this week when I heard David Cameron telling the world of his grand, if a little vague, plan to ensure that there are more women and ethnic minority Conservative party candidates.

In a way, there is nothing new in Mr Cameron’s aspiration. Historically, the Conservative party has supported the cause of any number of disfranchised minority groups — people who might otherwise have felt excluded from the political process. It is a rare parliamentary candidate shortlist, for example, which does not include at least two sexual deviants, for want of a better term. No party has given greater political power to people who take pleasure in, say, nailing their penises to a piece of wood, or asphyxiating themselves at the point of orgasm. It is quite possible that, moving with the times, the Conservative party has recently selected potential MPs who spend their evenings in the fashionable pursuits of ‘dogging’ and ‘piking’. Homosexuals have also been welcomed, so long as they are prepared to lie about their sexual preferences no matter how profound are our suspicions. And there is one tranche of the population which has been otherwise horribly discriminated against but which, within the Tory party, has found warmth and comfort and succour: the extraordinarily dense. Not for nothing is the Tory party sometimes known as the stupid party. No matter how thick you are, you can breeze through the selection procedure, become an MP and quite possibly end up as party leader. Hell, it’s happened at least once before.

But however laudable this progressive approach may seem to be, there is one essen tial difference to the approach now outlined by Mr Cameron. The Conservative party has not, in the past, positively discriminated in favour of sexually deviant morons — it is merely that the consuming stupidity and sexual peccadillos of such people have not actually counted against them. In other words, the high proportion of weirdos and half-wits occupying positions of power within the party has been attained through an entirely natural, organic process — rather than at the dictate or whim of a messianic individual.

And so to women. The refusal of women to put themselves forward as potential candidates may not be down to the chauvinistic attitudes of those awful middle-aged white men on the selection panels, but to the plain good sense of women. The experience of New Labour’s allwomen shortlists was not a happy one: a significant proportion of the women who got themselves selected as candidates proved to be useless or actually, in the end, hated the whole business and finally called it a day.

The all-women shortlists angered another section of the Labour party: those who wished to see more ethnic minority parliamentary candidates. The immediate loser when you start on the old positive discrimination in favour of one ‘minority’ group within the population is almost always another competing ‘minority’ group within the population. Rather than that smug and possibly mythical legion of well-heeled middle-class white men. Labour saw that all-women shortlists meant, de facto, fewer black candidates, and the black activists became very upset. This problem was caused partly by the inherent nature of centrally ordained targets — as we have seen with the National Health Service. Whilst they are intended merely as a means to a desirable end, they become an end in themselves. Also, with the Labour party and those black candidates, there were the social pressures to consider. White women may have been wary about putting themselves forward for candidacies, but not half as wary as women from black and Asian sections of the population. And you might argue that the reason that black and Asian women were less likely to come forward was not so much a result of inherent bias on the part of the Labour party as of a chauvinistic culture within those minority communities.

This last point is the crucial one. I suspect that most Conservative constituency chairmen would jump at the chance of selecting a black or female candidate if they were seen as being up to the job. But not if they’re not quite up to the job; not if they’re not as good as the white, male, middle-class candidate who is also on the shortlist. And the end result of having selected a candidate because of his or her race or gender, rather than ability, is being saddled with an MP who doesn’t quite punch their weight and who as a result perhaps reinforces negative racial or gender-based stereotypes. This, unquestionably, is what happened with that benighted legion of Blair Babes: at first we all thrilled to the notion that at last we had a truly representative government — but after a while we realised that a pretty hefty proportion of the new intake of female Labour MPs were mewing halfwits you wouldn’t trust to post a letter.

Attempts to impose politically correct quotas upon political parties will tend to have an adverse effect; you can’t change the political parties until society itself has changed. The bias lies not with the constituency activists but with the whole warp and weft of society and culture.

More worrying, though, is what happens to those blameless sexual deviants and morons who have been striving to win the constituency nominations and must now compete on a most uneven playing field. It would be a slightly more boring and less just world if the Tories were suddenly to jettison the very people who have provided them with such stoical and unstinting service these last 200 years or so.