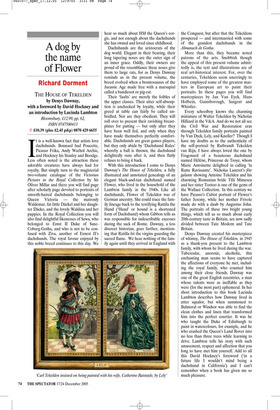 A dog by the name of Flower

THE HOUSE OF TEKELDEN by Denys Dawnay, with a foreword by David Hockney and an introduction by Lucinda Lambton Bloomsbury, £12.99, pp. 62, ISBN 0747580413 ✆ £10.39 (plus £2.45 p&p) 0870 429 6655 It is a well-known fact that artists love dachshunds. Bonnard had Poucette, Picasso Frika, Andy Warhol Archie, and Hockney his Stanley and Boodge. Less often noted is the attraction these adorable creatures have always had for royalty. But simply turn to the magisterial two-volume catalogue of the Victorian Pictures in the Royal Collection by Sir Oliver Millar and there you will find page after scholarly page devoted to portraits of smooth-haired dachshunds belonging to Queen Victoria — the matronly Waldemar, fat little Däckel and her daughter Däcko, and the lovely Waldina and her puppies. In the Royal Collection you will also find delightful likenesses of Sewa, who belonged to Ernst II Duke of SaxeCoburg-Gotha, and who is not to be confused with Ziva, another of Ernest II’s dachshunds. The royal favour enjoyed by this noble breed continues to this day. We hear so much about HM the Queen’s corgis, and not enough about the dachshunds she has owned and loved since childhood.

Dachshunds are the aristocrats of the dog world. Elegant in their bearing, their long tapering noses are the outer sign of an inner grace. Oddly, their owners are proud of the resemblance these noses give them to large rats, for as Denys Dawnay reminds us in the present volume, the breed evolved when a brontosaurus of the Jurassic Age made free with a marsupial called a bandicoot or pig-rat.

Their ‘faults’ are merely the foibles of the upper classes. Their utter self-absorption is unchecked by loyalty, while their greed at table can fairly be called unbridled. Nor are they obedient. They will roll over to present their ravishing breastplates for patting — but only after they have been well fed, and only when they have made themselves perfectly comfortable. Dachshunds are great games players, but they only abide by ‘Dachshund Rules’ whereby a ball is thrown, the dachshund delightedly runs after it, and then flatly refuses to bring it back.

With this introduction I come to Denys Dawnay’s The House of Tekelden, a fully illustrated and annotated genealogy of an elegant black-and-tan dachshund named Flower, who lived in the household of the Lambton family in the 1940s. Like all dachshunds, Flower of Tekelden was of German ancestry. She could trace the family lineage back to the terrifying Rattila the Hund (‘Hund’ or hound is a shortened form of Dachshund) whom Gibbon tells us was responsible for indescribable excesses during the sack of Rome. Dawnay, a less discreet historian, goes further, mentioning that Ratilla bit the virgins guarding the sacred flame. We hear nothing of the family again until they arrived in England with the Conquest, but after that the Tekeldens prospered — and intermarried with some of the grandest dachshunds in the Almanach de Gotha.

More than this, they became noted patrons of the arts. Snobbish though the appeal of this present volume admittedly is, the text and illustrations are of real art-historical interest. For, over the centuries, Tekeldens seem unerringly to have employed some of the greatest masters in European art to paint their portraits. In these pages you will find masterpieces by Jan Van Eyck, Hans Holbein, Gainsborough, Sargent and Whistler.

Every schoolboy knows the charming miniature of Walter Tekelden by Nicholas Hilliard in the V&A. And do we not all see the Civil War and Restoration eras through Tekelden family portraits painted by Van Dyck, Lely, and Kneller? Though I have my doubts as to the authenticity of the self-portrait by Ratbrandt Tekelden van Rijn, I have always loved the one by Fragonard of a beauteous dachshund named Hélène, Princesse de Troye, whom Marie Antoinette delighted in calling ‘la Ratte Ravissante’. Nicholas Lancret’s fête galante showing Antoine Tekelden and his charming Romanian bride Tilli Mimescu and her sister Tootoo is one of the gems of the Wallace Collection. In this century we have Picasso’s Cubist portrait of Flower’s father Jeremy, while her mother Frivole made do with a daub by Augustus John. The portraits of these two bright young things, which tell us so much about early 20th-century taste in Britain, are now sadly divided between Tate Modern and Tate Britain.

Denys Dawnay created his masterpiece of whimsy, The House of Tekelden, in 1945 as a thank-you present to the Lambton family, with whom he lived during the war. Tubercular, anorexic, alcoholic, this enchanting man seems to have captured the affections of everyone he met, including the royal family, who counted him among their close friends. Dawnay was one of the great English eccentrics, a man whose talents were as ineffable as they were (for the most part) ephemeral. In her short introduction to this book Lucinda Lambton describes how Dawnay lived in utter squalor, but when summoned to Balmoral or Windsor was able to find the clean clothes and linen that transformed him into the perfect courtier. It was he who taught the Duke of Edinburgh to paint in watercolours, for example, and he who crashed the Queen’s Land Rover into no less than three trees while learning to drive. Lambton tells his story with such amusement, respect and affection that you long to have met him yourself. Add to all this David Hockney’s foreword (‘in a future life I wouldn’t mind being a dachshund in California’) and I can’t remember when a book has given me so much pleasure.