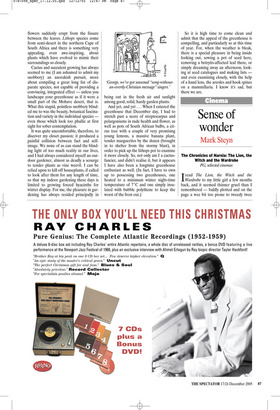 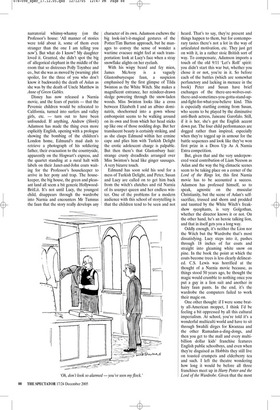 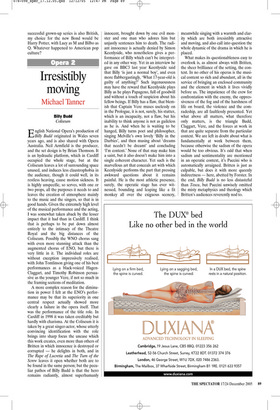 The Chronicles of Narnia: The Lion, the Witch and the Wardrobe PG, selected cinemas Iread The Lion, the Witch and the Wardrobe to my little girl a few months back, and it seemed thinner gruel than I remembered — baldly plotted and on the page a wee bit too prone to tweedy twee narratorial whimsy-whamsy (on the Professor’s house: ‘All manner of stories were told about it, some of them even stranger than the one I am telling you now’). But what do I know? My daughter loved it. Granted, she didn’t spot the big ol’ allegorical elephant in the middle of the room that so distresses Polly Toynbee and co., but she was as moved by (warning: plot spoiler, for the three of you who don’t know it backwards) the death of Aslan as she was by the death of Uncle Matthew in Anne of Green Gables.

Disney has now released a Narnia movie, and the fears of purists — that the Pevensie children would be relocated to California, turned into surfers and valley girls, etc. — turn out to have been unfounded. If anything, Andrew (Shrek) Adamson has made the thing even more explicitly English, opening with a prologue showing the bombing of the children’s London home, Edmund’s mad dash to retrieve a photograph of his soldiering father, their evacuation to the countryside, apparently on the Hogwart’s express, and the quartet standing at a rural halt with labels on their Janet-and-John coats waiting for the Professor’s housekeeper to arrive in her pony and trap. The housekeeper, the big house, the green and pleasant land all seem a bit generic HollywoodBritLit. It’s not until Lucy, the youngest child, disappears through the wardrobe into Narnia and encounters Mr Tumnus the faun that the story really develops any character of its own. Adamson eschews the big look-isn’t-it-magical gestures of the Potter/Tim Burton approach, but he manages to convey the sense of wonder a wartime evacuee might feel at such transportation: look at Lucy’s face when a stray snowflake alights on her eyelash.

Edmund has soon sold his soul for a mess of Turkish Delight, and Peter, Susan and Lucy are called on to get him back from the witch’s clutches and rid Narnia of its usurper queen and her endless winter. One of the problems for a modern audience with this school of storytelling is that the children tend to be seen and not heard. That’s to say, they’re present and things happen to them, but for contemporary tastes there’s not a lot in the way of articulated motivation, etc. They just get on with it, in a rather stoic British sort of way. To compensate, Adamson imports a touch of the old 9/11 ‘Let’s Roll’ spirit: you didn’t start this war but, whether you chose it or not, you’re in it. So before each of the battles (which are somewhat perfunctory and lacking in menace in the book) Peter and Susan have brief exchanges of the there-are-wolves-outthere-and-sometimes-you-gotta-stand-upand-fight-for-what-you-believe kind. This is especially startling coming from Susan, who seems to be played by the diminutive anti-Bush actress, Janeane Garofalo. Still, if it is her, she’s got the English accent down pat. The four child performances are dogged rather than inspired, especially when they’re togged up in armour for the battle sequences and look like they’ve won first prize in a Dress Up As A Narnia Extra competition.

But, given that and the very underpowered vocal contribution of Liam Neeson as Aslan and the way the big climactic scenes seem to be taking place on a corner of the Lord of the Rings lot, this first Narnia movie has to be accounted a success. Adamson has professed himself, so to speak, agnostic on the muscular Christianity, but the scene of Aslan’s selfsacrifice, trussed and shorn and prodded and taunted by the White Witch’s freakshow sycophants, is very Golgothan, whether the director knows it or not. On the other hand, he’s an heroic talking lion, and that in itself gets you a long way.

Oddly enough, it’s neither the Lion nor the Witch but the Wardrobe that’s most dissatisfying. Lucy steps into it, pushes through 18 inches of fur coats and straight into gleaming white snow on pine. In the book the point at which the coats become trees is less clearly delineated. C.S. Lewis was horrified at the thought of a Narnia movie because, as things stood 50 years ago, he thought the magic would crumble to nothing once you put a guy in a lion suit and another in hairy faun pants. In the end, it’s the wardrobe the computers failed to work their magic on.

One other thought: if I were some bratty all-American moppet, I think I’d be feeling a bit oppressed by all this cultural imperialism. At school, you’re told it’s a wonderful multiculti world and have to sit through Swahili dirges for Kwanzaa and the other Ramadan-a-ding-dongs, and then you get to the mall and every multibillion dollar kids’ franchise features English public schoolboys, and even when they’re disguised as Hobbits they still live on toasted crumpets and elderberry tea and such. I left the theatre wondering how long it would be before all three franchises meet up in Harry Potter and the Lord of the Wardrobe. Given that the most successful grown-up series is also British, my choice for the new Bond would be Harry Potter, with Lucy as M and Bilbo as Q. Whatever happened to American pop culture?